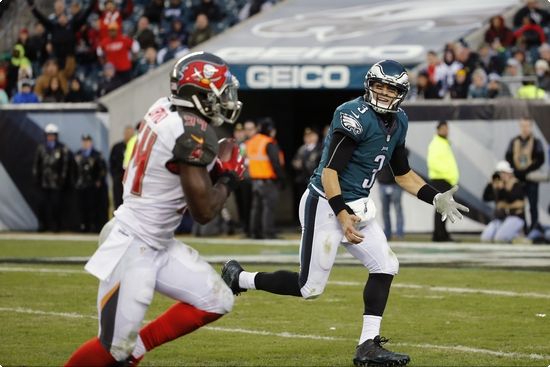 One criticism of Chip Kelly during his tenure as Eagles coach has been opposing defenses saying they know the play calls. Of course, they don’t always know the play calls, but a lot of Bucs players did yesterday and didn’t mind disclosing that fact after the game.

“You can practice all you want, but you’re not ready for it until it comes at you,” said safety Chris Conte, who would later get one of three Bucs interceptions. “You’ve got a lot of adrenaline going, and everything’s flying around. Once you calm down, you realize it’s not that fast. They’re running the same plays over and over again.”

Lavonte David also said he was able to make his interception due to play recognition.

“It was just play recognition,” David told NJ Advance Media after the game. “I knew exactly what they wanted to do. It’s the same thing they were doing all game. I knew that on the drive before they were hitting us a lot with screen passes. So, knowing that, all I needed to do was read and react.

This isn’t the first time this team has been embarrassed like this. The 49ers knew their plays a couple years ago. The Cowboys knew their plays earlier this year, until they didn’t. No doubt in my mind that they did.

The Eagles need to hire a psychologist to examine Kelly on the sidelines, because he’s clearly not a good game day manager. And we saw the same thing with Andy Reid through the years. Aye.