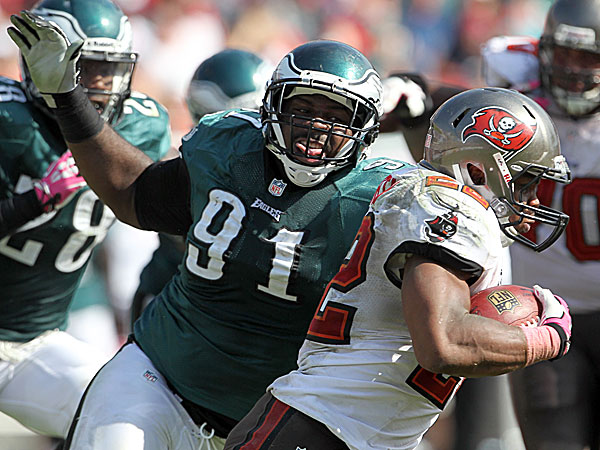 In yesterday’s huge news day, this somehow slipped through the cracks. Fletcher Cox was on 97.5 The Fanatic’s morning show with Anthony Gargano and ran into a buzzsaw when Gargano inherited the voice of the fan and decided to try to make Cox feel bad about “yucking it up” on the field while his team was getting its ass kicked. It became a very awkward exchange very quickly, as you can hear below.

AG: “Hey, so, what was the deal with – because you know, I don’t like it, either, but when you’re losing, you know how it is, Fletch. When you’re losing, no one wants to see anybody yuck it up with anybody on the other team. So, what was the deal with you and Bennie Logan? And, because Bennie talked about it, right? About being, he was from some hometown, some of the guys’ hometown, is that the deal?”

Random. Philly guy trying to back up Philly sports fans that feel this way. Except I’m not sure too many fans feel this was anymore. You know, we pride ourselves on being smart fans. Hating on a player because he’s laughing with a player of the opposing team is a little weird. Times change. This isn’t the 80’s and 90’s anymore. I don’t think it’s as egregious as it looks, nor do I think it’s as big a deal as people make it out to be anymore.

FC: “We don’t get caught up in that, man. That’s crazy. And I don’t care about it – what anybody has to say about it. We’re NFL players, we’re pros, we respect each other. You know, who cares that we’re talking to the other team? It had no effect on us winning or losing that game. I mean, of course you want to respect each other, you wanna laugh and play. You know, but when it’s the time to get serious, you get serious. And Bennie is like that. Bennie likes to play, I like to play. But when it’s time to get serious, it’s time to get serious. Nobody cares about what the outsiders think, because he was talking to his ex-teammates, or he was laughing with Jameis. That’s out of respect.

At this point, Cox tries to interject, and Gargano cuts him off.

AG: “Hold on. What you seem as innocent, you think it’s innocent, people go ‘Oh, you’re getting your ass kicked and you’re smiling and laughing.’ And that doesn’t come across well.”

FC: “I mean it don’t, from people on the outside, but I mean I don’t think anybody can take my smile away. ‘Cause I’m gonna smile, you know, through the good and the bad.”

AG: “Yeah, I hear ya. But you know what I’m talking about. Like Brian, this isn’t just fans, Brian Dawkins talked about this.”

FC: “Everybody respects Brian and everybody knows, you know, he’s well known in Philly, but I mean of course we were losing and if everybody felt like Bennie was wrong, then, I mean, he was wrong. But Bennie – he was smiling – and he’s like me, nobody can take his smile away.”

AG: “Yeah, and look, nobody wants you to lose that smile. That’s such a beautiful thing about ya. It’s a great smile that you have. It’s a great smile. When you know, you see it, you get a taste of it, man. When people … 45-17 to the Buccaneers is unacceptable at home. You know? I mean that’s what it comes down to. Because you’re right, all the other stuff is window dressing. It doesn’t mean anything. It’s all about context, right? You’re sitting there going, ‘Who cares? Big deal. We gotta win a game.’ It’s not about stupid things like that.”

Just one day earlier, WIP’s Angelo Cataldi spit hot fire at Chip Kelly in his weekly interview. Lane Johnson called out the fans and then apologized. What is going on with these guys?

Notwithstanding how annoying the players have come across, how ridiculous did that interview sound? If I was Cox, it would take everything in my being to not just hang up when I’m getting lectured about playing in a city I’ve already played in for four years.