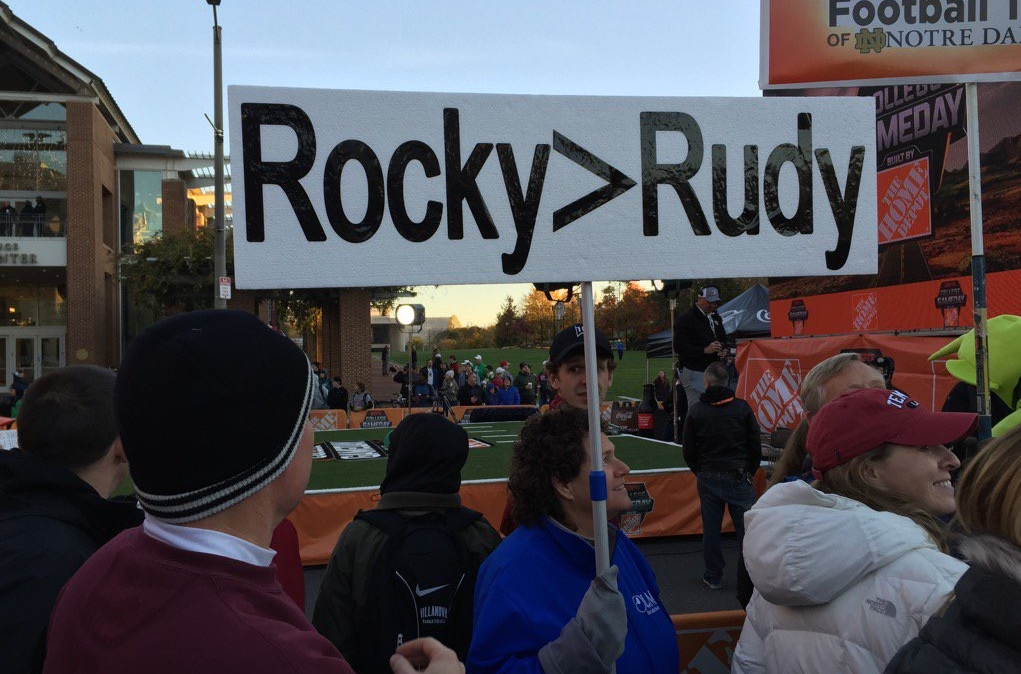 The Eagles won yesterday and they didn’t even play. The Mets lost the World Series after a tremendous choke job. It was a good weekend.

The best signs from College GameDay in Philly on Saturday.

Brian Kelly is kind of a jerk.

Here’s the video of the Phillie Phanatic as the guest picker on GameDay. Lee Corso also turned heel on us.

Seahawks wide receiver, Ricardo Lockette, took a nasty looking hit in the Seahawks-Cowboys game, and laid motionless on the ground for quite a while. Almost instantaneously, a crowd surrounded him, knowing he was hurt badly.

Dez Bryant: “That’s what you f***ing get!” All class in Dallas! pic.twitter.com/20z31MznAq

Dez Bryant was caught saying, “That’s what you f’n get!” on camera, but the context is unknown. However, regardless of who it was meant for, and I doubt he was talking about Lockette because he seriously cannot be that dumb, it came across looking really poor due to the timing, even if Seahawk players were goading him, which I find hard to believe. And he came across looking even worse after the game for flipping out at the media about it.

Emotions boiled over in the Cowboys locker room after the game, as Bryant started screaming at reporters, loud enough that it was heard across the entire room. The Cowboys public relations staff attempted to intervene but Bryant kept yelling. “Stay the (expletive) away …,” Bryant yelled to a group of reporters. “Why don’t you all get the (bleep) out of here? This is our (expletive) locker room. You (expletive) dirty (expletive).”

You do you, Dez. He even said he got on a knee to pray for the guy. I’m sure he did, because everyone did.

I kind of agree with Doug here. As Lockette was prone on the ground, not moving anything, Thom Brennaman and Troy Aikman went on and on about how the NFL is making the game safer and doing everything they can to stop plays like this from happening, but they can’t do everything to stop it. It sounded more like a PSA for the NFL when we didn’t know what the hell was going on with Lockette. It was ridiculous. Speaking of Brennaman, he’s a dolt. “Greg Hardy may be a piece of shit, but DAMN CAN DAT BOY PLAY SUM FOOTBALLS!”

Speaking of injuries, it was a bad week for the NFL. Some high profile stars are now done for the season, including Le’Veon Bell and Steve Smith, Sr.

The Mets lost the World Series to the Royals in 5 games. They blew three leads in the 8th and 9th innings. Of course, the Royals are a great team, but I’d look at that as more of a choke job by the Mets than anything, and I’m really trying to stay unbiased. You’d be hard pressed to find any Met fan that’d say, “Yeah, the Royals definitely deserved to win that Series.” Nope, you’ll likely hear about what could’ve been, because it was there for the taking.

Not to mention an unfathomable error by Yoenis Cespedes in Game 4 Saturday night to get doubled off in the bottom of the 9th and give the Royals a stranglehold on the series. This guy isn’t going to get the money he wants in free agency, that’s for sure.

And, oh yeah, the guy who helped the Mets get to the World Series may have single-handedly cost them the title. Daniel Murphy disappeared against the Royals, at the plate and in the field. 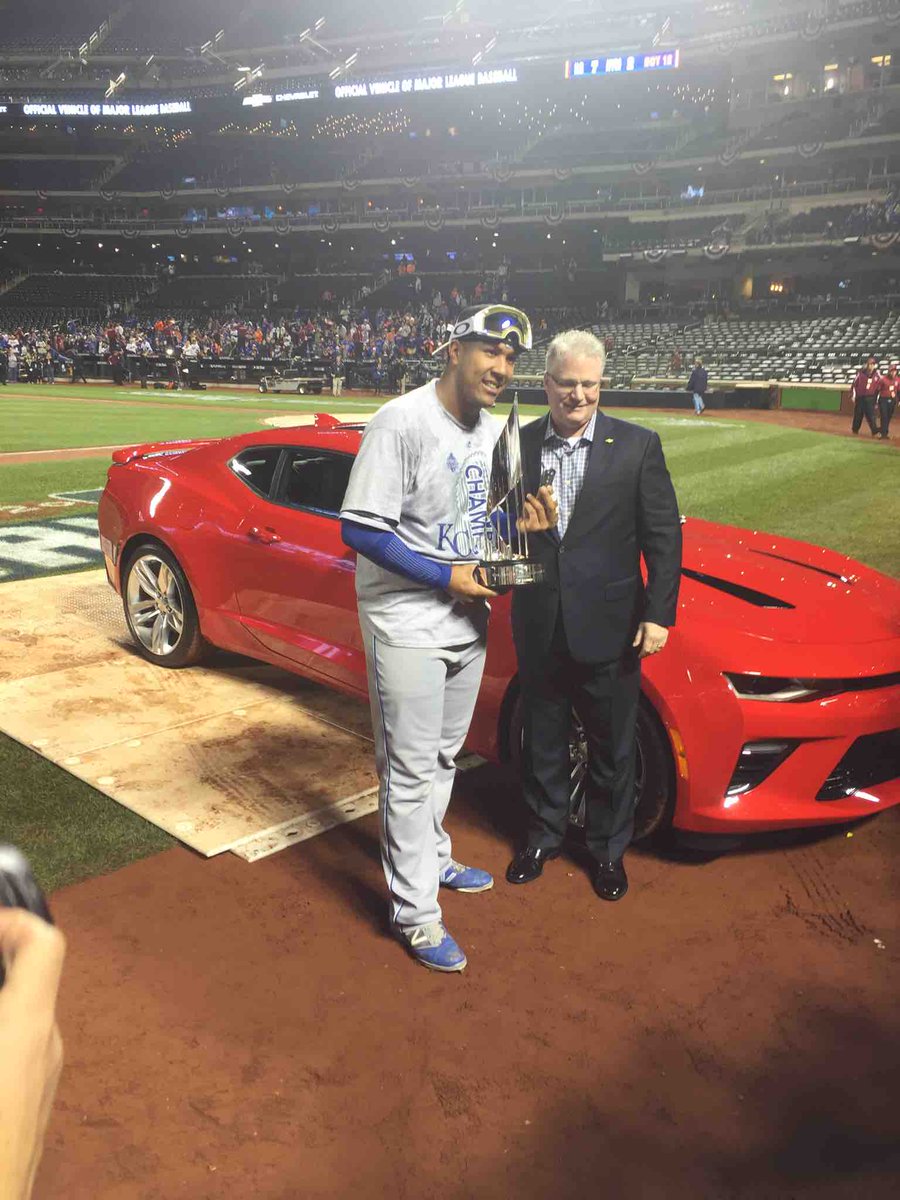 Salvador Perez won the MVP award. I don’t know who he is, either.

Dario Saric pretty much said he’ll be with the Sixers next season.

The University of Notre Dame has fired a female academic coach, the New York Daily News reports, after a student filed a lawsuit against the school on Friday claiming that the tutor had coerced several university football and basketball players into having “racially-motivated” sex with her daughter. An African American student enrolled at Notre Dame on an academic scholarship in the fall of 2014. He sought tutoring lessons in the spring. The (white) tutor immediately “initiated, directed and coordinated a sexually and racially motivated inappropriate and demeaning relationship,” between the student and her daughter. The tutor would orchestrate “sexually and racially motivated” trysts at hotel rooms between the student and her daughter, the Daily News reports, and afterwards ask him about the “nature, frequency, and quality of the sexual activities.” Also, the lawsuit claims, the tutor would make “racially-charged comments about his sexual prowess and genitalia.”

Patrick Kane is unlikely to be charged in his rape case.

The Miami Hurricanes defeated the Duke Blue Devils on a literal last second kickoff return that included eight laterals and at least two penalties and a down by contact that wasn’t called by the refs. This resulted in the suspension of the entire officiating crew for two games for screwing it up. But, I always love good calls, so here’s the call from the Miami radio announcers.

Jonah Keri, formerly of Grantland, went on a diatribe of his former employer before Game 4 of the World Series on Saturday night. It was pretty epic. Andy Grabia storified it for our viewing pleasure, and here it is: