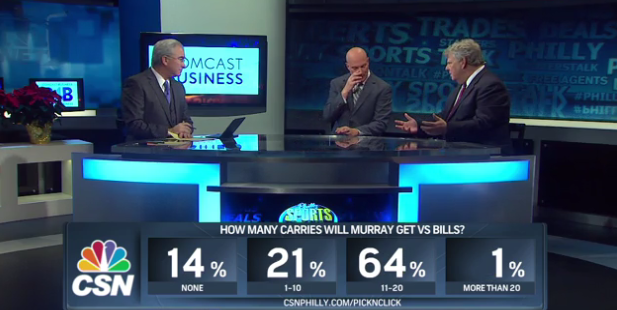 The one person who must have been the most depressed this Eagles season, up until this past Sunday, that is, had to have been Dave Spadaro. You may not notice it, but he carries his Eagles pompoms for everyone to see, although sometimes they’re invisible. Tonight on Philly Sports Talk, they were absolutely visible as Spadaro was trying to defend DeMarco Murray to Reuben Frank.

There’s no question by now you’re not exactly surprised that Spadaro was defending a terrible Eagle. He’s done it before, and it won’t be the last time he does it. Frank eventually caught the ire of Spadaro, who busted out this line when he just seemed to have had enough:

Oh, no he didn’t! Spadaro coming out swingin’ with the haymakers, and Frank with the quick response.

Full video of the segment below. It gets really good around the 1:00 mark. Pay attention to when Spadaro basically says Ryan Mathews isn’t good.