As if there weren’t enough reasons already to hate the Dallas Cowboys and their fans considering their continuous support of woman beater Greg Hardy, now comes this. Apparently Cowboys Nation a.k.a their bird brain fans are trying to recruit another waste of life to come to Dallas. The dumb fans in Dallas want Johnny Manziel to join their party.

Manziel is clearly on the way out of Cleveland. There’s always been speculation that Jerry Jones might want Manziel. Now the fans are trying to do what they can to make it happen. Dallas Cowboys fans started an online petition to bring Johnny Football back to his home state. Isn’t that great?

More than 800 fans have already signed the petition. If you head over to www.bringjohnny2dallas.com you can even buy one of these “Bring Johnny 2 Dallas” t-shirts. 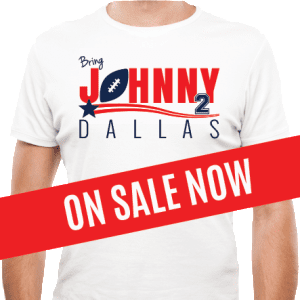 Wow! I mean just Wow! Look how beautiful that shirt is.

We need to bring the greatest quarterback to grace God’s country, Texas, back to Texas! Johnny is a quarterback that can bring some spark back to ‘Merica’s Team. The young star hasn’t yet had his chance to shine. As the future leader of the greatest sports franchise in the world, he would get that chance. As true fans, we need to put a star on this man’s helmet and bring him home to the Lone Star State where he belongs. Dallas fans, let’s make Jerry hear our voice by spreading Johnny awareness across our great state!

Join the campaign to Bring Johnny to Dallas and show your support with a T-shirt.
Together we can make this happen!

First off, even if I didn’t know that the Cowbows, their fans and Johnny Manziel all sucked, ANYONE whoever uses the term ‘Merica, ‘Merica’s Team or any form of that bullshit is automatically disqualified from life. They suck!

On the other hand, I do want that little twerp in Dallas along with all the other scumbags in that organization. They all deserve each other.