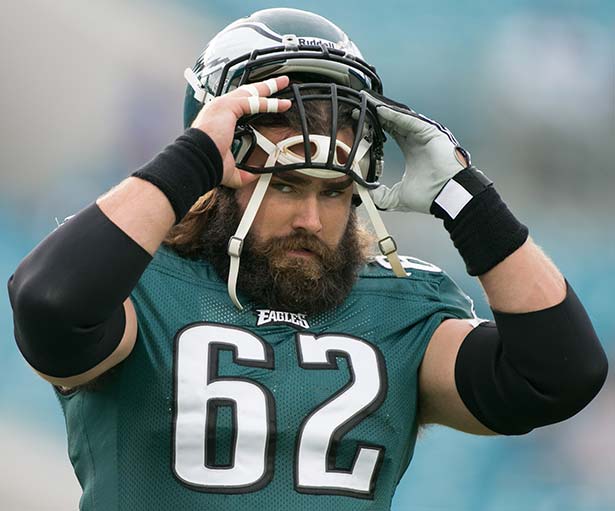 One of the most well-respected players in this city the last few years has been Jason Kelce. He’ll own up to when his performance is bad on the field, and he’s, for all intents and purposes, been one of the most personable guys off the field even when he’s chilling at local bars and clubs. So, when he speaks, we usually listen, whether it’s good or bad.

And yesterday on the 94WIP Morning Show, Kelce joined Howard Eskin, who was filling in for Angelo Cataldi and company, to talk about how this season’s expectations took a downward spiral. One of those main reasons, Kelce says, is because there were too many new guys brought in via free agency, and that he, as a player, didn’t welcome the new players as he should have. And, I guess that’s good to recognize that, but to say it now? Something just seems off about this whole thing.

Kelce also talked about his relationship with Chip. He was also asked about the false start penalties, but Kelce decided not to go into detail and actually sounded a bit peeved when talking about it.

Here’s what Kelce had to say:

I think the biggest thing to me is I’ve been through two seasons where you’ve seen a collapse or a downfall with some teams. In both offseasons, there was tremendous change. And by change, I mean through free agency. And the reason I hesitate saying that is because we’re probably gonna have some new free agents this year, we’re probably gonna sign some new guys this year.

You can make great acquisitions in free agency – I’m not saying that you can’t. But I think on offense, especially, when you have so much change, so many new guys. You know, I’m a big – I think I’ve realized through these two instances that trust and chemistry are more important than I think I ever really understood, and, um, it’s hard to develop that within one offseason. And I think when you have guys who are retained on teams and guys who stay with teams for years and years and years, and you bring in one or two guys through free agency ever year, I think that tends to keep everyone together and welcome those new people even better.

And if I’m being quite honest, I don’t think I welcomed the new pieces well enough as one of the guys being retained. I think that never really took place from the players’ aspect of it. I think I’ve seen this twice now and I think it’s really hard to build championship caliber teams and winning teams through free agency.”

Why the chemistry wasn’t there from the beginning:

And it goes deeper than being out during OTAs with somebody. It goes deeper than taking a practice rep with somebody. It’s just something that when you’re with somebody for years, or a locker room’s been together and you have a core group of guys who have been through only the Philadelphia Eagles – all they know is this city, all they’ve played for is this city – I think that that tends to build a locker room and build a culture — which is what one of Chip’s favorite words were — that lends itself to chemistry and lends itself to people giving of each other and only knowing the Philadelphia Eagles. And that is really to hard to build within one offseason. You can’t just do that at practice.”

Will the chemistry be built eventually?

I think if we retain the players that we have now – I mean, there’s going to be offseason changes this year – but I think that can be done. And I think I’m going to my best job this offseason of trying to get guys together, trying to make this team a team again.

Because right now this is the Dream Team II. A collection of guys. All of a sudden, you sign the NFL’s leading rusher. Sam Bradford, one of the best quarterbacks around that you could get through a trade. We got two new starting guards. Another new running back. A brand new receiver through the draft. There was so much change. I think that me, as one of the offensive guys being retained, I didn’t do a good enough job of getting us together and creating those bonds and those deals of making everybody feel like a team.”

Is Nick Foles not being here a reason for the lost chemistry?

It’s tough to say, and I don’t know that it was just me. And I don’t think it was actually me. Sam [Bradford] and I’ve had a great relationship all season long. But I think that … when you’re not as connected with everybody, when all you’ve ever been through is the Philadelphia Eagles, when you’ve been elsewhere, yadda yadda yadda, it’s not just Sam. It’s the moment anything starts going wrong in a game, it’s not as tight. The ability to overcome adversity to relying on each other and going out and doing it again, again and again and understanding it’s just going to happen. It’s just going to get fixed as long as you do your job and trust the other people that they’re gonna get their job done. And I think that’s one of the reasons why Sam started playing better. Not to mention he started feeling more comfortable in the offense, more comfortable in his legs and everything, getting healthier. The ability to overcome adversity and mistakes when you have those connections with people I think becomes easier.”

Did DeMarco Murray’s conversation with Jeffrey Lurie and being pissed off hurt the offense?

Um, I’m gonna say no. Even if that did take place, even if that’s the way that DeMarco felt, I thought that he was very professional in the fact that he never told any of us that’s how he felt. And I think that that’s huge. If he went to the owner, and talk to the owner, that’s first of all none of my business. And second of all, if that did take place, he still came to work every single day with the attitude that he was a teammate and he was going to do whatever he could in whatever role the team was giving him.”

Will a new coach take time for this team to get back to the playoffs?

I don’t know. I’ve seen coaches turn things around within a year. And, to be honest, it’s almost like with a new coach, everybody is starting over. So now, this could create everyone coming together even more. Chip preaches the culture, preaches the culture, and then when you add a bunch of new pieces in, everybody’s gonna interpret it in their own way, and if it’s not explained the same way it was the first two years or it’s not done the same way, guys are gonna interpret what their own meaning of culture is. And, I think with a new coach, he’s gonna set the precedence right away. So, hopefully, they’ll be a clear direction where this team’s gonna go. Hopefully this will bring guys together and hopefully we can finally become a team again.”

Kelce went on to say he didn’t like some of the things Chip did as the coach, but says he’s a good coach ultimately and if he gets his dual threat quarterback, he’s going to be a successful NFL coach.

It was actually one of the most inside type interviews we’ve heard from anyone in the organization since Chip was fired on Tuesday. There’s a lot more that Kelce went into after these comments. Most of the above comments take place in the beginning of the interview.

You can listen to Kelce’s entire interview below. Audio courtesy 94WIP.