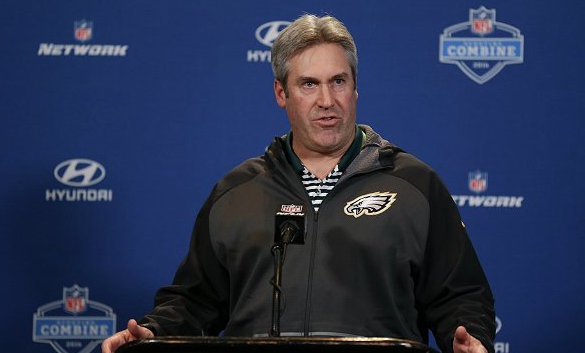 We’ve all heard the jabs Jeffrey Lurie, the players and fans have taken at Chip Kelly on his way out of Philly. Now Doug Pederson is jumping in on the fun. Yesterday, Pederson and Howie Roseman spoke to the media at the NFL Scouting Combine in Indianapolis. You can watch their entire press conferences here. Pederson couldn’t help himself, and took some jabs at the way Chip Kelly ran his offense.

We all got sick of watching DeMarco Murray run stretch plays to the outside as if he had the speed of Ryan Mathews and Darren Sproles. Chip insisted that every running back on the roster was interchangeable, and that they could all run the same plays. Clearly, even after a few weeks, we knew this was not the case. Chip would never admit that, though.

Right or wrong, not saying it’s the right way, but I just know the different style of running that I’ll bring utilizes all three — a downhill guy, a slasher and then you’ve got a great quick guy in Sproles that can create a matchup problem on defense, whether he’s coming out of the backfield or lining up as a receiver or wherever he might be that utilizes his strength that way. So three different guys, three different styles.”

If only Chip could have realized this, or if he did and just swallowed his pride to make the necessary adjustments to properly utilize every guy to their strengths, then he’d probably still be the coach of the Eagles. Novel concept, I know.

Our first year in Kansas City, when Coach Reid and I talked about this, I think we tried to have some of that mentality, where we’re going to make people fit what we do. That was a big mistake. So we learned to adapt to the players around us.”

Pederson is saying all the right things to make us think that he “gets it” and will run this team to its strengths, and not just keep doing what’s not working to prove he’s the guy to make it work. I’m done with scheme guys that want to prove their concepts work. How about we let the players, finally, play to their strengths and see who the superior team is, rather than the superior coach/scheme.

So from all of us in Philly, and now our head coach too… You’re an idiot, Chip!