Unfortunately, the Washington Capitals took care of business on Sunday and eliminated the Philadelphia Flyers from the Stanley Cup Playoffs. The Philly fans have been under much scrutiny during the series thanks to the behavior of a few jackasses. On Sunday, however, the fans gave the Flyers a standing ovation when the game was over. But that’s not all some fans did, and what some fans did do may shock you.

Alex Ovechkin from the Capitals was skating off the ice when several Flyers fans began screaming at him and noooooo, it wasn’t what you’d think. The fans started saying, “Go beat the Penguins!” and then a few other fans joined in until it turned into a mini-chant.

For the first time since 2009, the Penguins and the Capitals will meet in the NHL Playoffs and it no doubt has the makings to be a classic. The Capitals were the best team in the league in the regular season, while the Penguins have been one of the hottest teams in the NHL over the last few weeks. Its the battle of the two superstars Alex Ovechkin and Sidney Crosby.

Here’s a photo of the two courtesy of Getty Images: 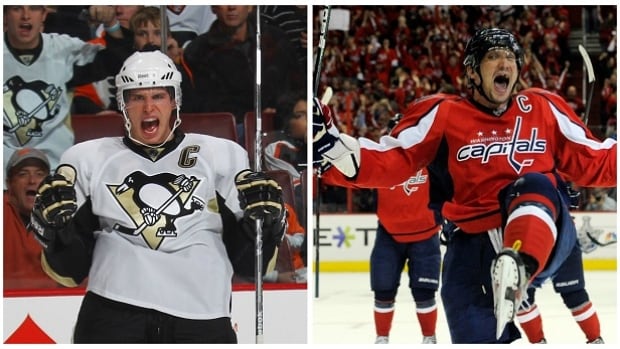 I hate both teams, but I can’t stand Crosby, so its not shocking to hear that the fans were chanting what they were chanting to Ovechkin.

As if it’s any type of consolation, let’s hear Capitals’ coach Barry Trotz say some good things about our hockey team.