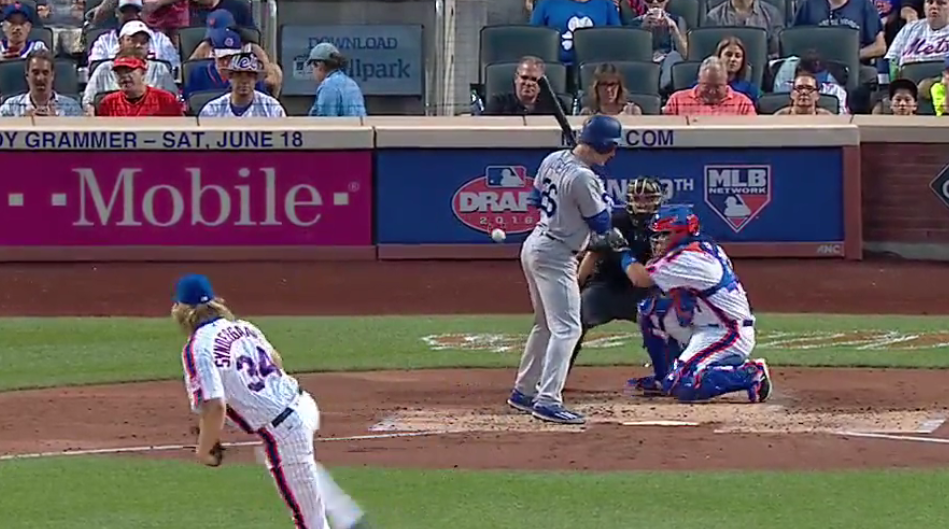 The New York Mets and Los Angeles Dodgers are having quite the budding rivalry in the National League. From last season’s playoffs to this regular season, every game is almost like a playoff game now when these two get together.

The Mets remarkably made it to the World Series last season, but did so without their starting shortstop Ruben Tejada [who’s no longer with the team now, so don’t believe those Mets fans who think he was some sort of a star because he wasn’t – the Mets released him before the regular season began]. The reason the Mets were without him in the World Series was because of Chase Utley sliding late into Tejada trying to break up a double play during Game 2 of their playoff series. Tejada broke his leg in the collision.

The dirty slide caused MLB to introduce a new rule regarding sliding into second base. Many dub it the “Chase Utley Rule.”

This weekend, the two foes are at it again for the first series in New York since the playoffs last season. The two teams played each other in a four-game tilt earlier this season, but, of course, the Mets didn’t want to seek retribution against Utley without their fans there to boo him. Because, you know, he owns them.

Friday night, Utley tied the game in the top of the ninth inning with a bases loaded double that tied the game, 5-5. The Mets would win the game thanks to a walk-off home run by Curtis Granderson, but Utley still has New York’s number.

And tonight, all Utley had to do was see a baseball being thrown behind him to get Noah Syndergaard out of the game.

That umpire clearly knew what was about to happen, but I guess warnings weren’t issued prior to the game. Terry Collins flipped his shit and was thrown out  of the game, too.

Many reactions on Twitter were of the “UNFAIR!” variety from pretty much everyone, but there are literally zero people out there who didn’t think this was going to happen, including everyone on the field and in those dugouts. General unwritten rules of baseball – the ones so many people hate – didn’t come into play here because the umpire decided he wasn’t going to deal with that shit and tossed Syndergaard abruptly. He knew what was going on. He knew Mets fans want to see Utley tarred and feathered. He knows Mets fans want Utley’s head on a stick.

And he decided he would make the game about himself instead. Which is hilariously glorious.

UPDATE: HE HIT A HOME RUN IN HIS NEXT AT-BAT!

UPDATE II: HE HIT A GRAND SLAM IN HIS AT-BAT AFTER THAT!