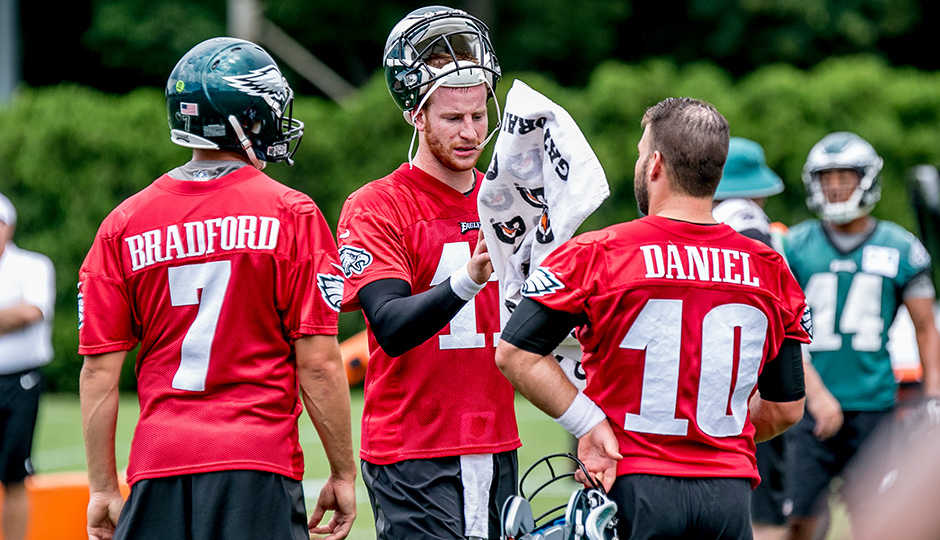 Come the fall it’ll be Sam Bradford’s team, but the summer belongs to Carson Wentz.

And take it in while you can, it might be the only time he plays this year.

The Philadelphia Eagles have spent $57 million on their quarterbacks this season and $34 million is guaranteed. They are the only team in the league with $10-or-more million invested into the position. Bradford received a two-year, $35 million deal, Chase Daniel agreed to a three-year, $21 million contract and the Eagles handed out $26.7 million to Wentz over four years.

There won’t be a quarterback competition, head coach Doug Pederson has made it known on numerous occasions that Bradford will be the starter, Daniel the backup and Wentz the third stringer. It’ll be interesting to see, however, how the snaps get distributed during Training Camp. The starter and backup normally get most of the snaps, while the third stringer is relegated to work with the scout team. That’s not going to happen here, Wentz will see a lot of meaningful snaps.

Bradford will be coming into camp healthy for the first time in three years, which is a huge plus, but where’s his head at? Bradford appears to have gotten over the frustration of the Eagles moving up in the draft and selecting Wentz. He demanded to be traded at first and when there wasn’t a market for him, he rescinded it and reported to Eagles voluntary workouts in May.

Sammy might be all smiles right now, but how does he really feel knowing he’s basically just a stop-gap, which is another bump in the road for his career and means he’ll most likely go to another franchise next year where he’ll have yet another new offense to learn? Will he just go through the motions, or will he have a fire lit under him where he wants to prove that he could’ve been the franchise guy all along? This will be Bradford’s fifth different system since being taken No. 1 overall in the 2010 NFL Draft.

Then there’s the second overall pick Wentz, who the Eagles game up a plethora of picks for and has just 23 starts and 612 pass attempts at the FCS level. How is he going to handle the speed of the game coming from North Dakota State?

He’s definitely in a great situation where he’s receiving tutelage from two former back-up quarterbacks in Pederson and offensive coordinator Frank Reich. And to take it a step further, they got to pick the brains of some of the all-time greats while they were in the league. Pederson backed up Brett Favre in Green Bay and Dan Marino in Miami, while Reich played with Jim Kelly in Buffalo. Wentz will also have Daniel in his corner, a guy who knows Pederson’s offense well after spending three years in Kansas City while he was the defensive coordinator. Wentz worked in a similar type of West Coast Offense while with North Dakota State and that should make the learning curve easier.

Even if Bradford gets hurt this season, Daniel will most likely be tabbed the starter. Unless the Eagles fall out of playoff contention or Bradford and Daniel both are out with injuries, expect Wentz to be holding a clipboard in 2016.

The Eagles haven’t had stability at the most important position in sports since Donovan McNabb was sent to the Washington Redskins in 2010. They won’t know if they have their franchise guy this season, but at least they’ll see glimpses of a potential one.