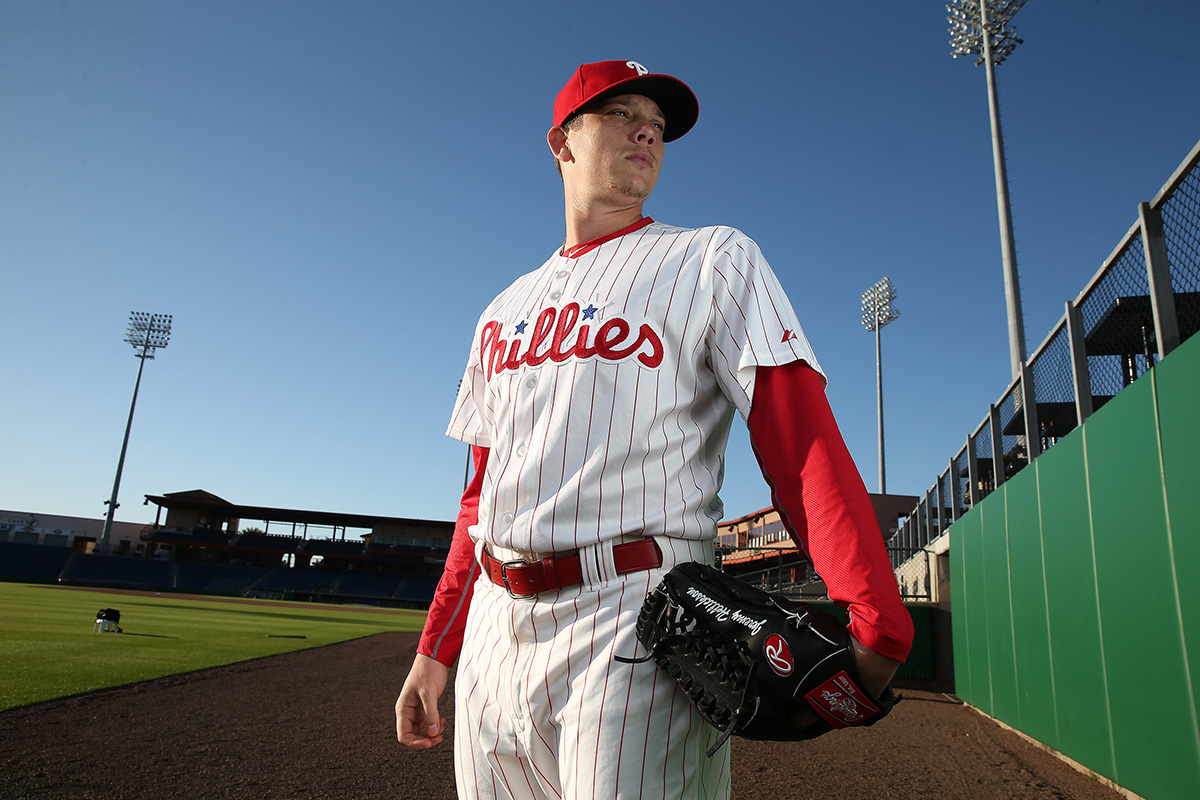 It remains to be seen which team will make the move to add Jeremy Hellickson at the MLB trade deadline on August 1, but it’s a virtual lock he won’t be with the Phillies after Monday. Hellickson has allowed just one run over 14 innings over his last two starts and is heating up at just the right time for general manager Matt Klentak to try and get a nice return for the surging 29-year-old.

#Rangers and #Orioles were among several teams with scouts watching Jeremy Hellickson last night. #Marlins obviously in the mix.

These two teams can be added to the list which already contained the Miami Marlins.

While it remains to be seen what the Phillies could get in return for Hellickson, some believe it would be best to not trade him at all.

At this point, think it makes most sense for Phillies to just keep Jeremy Hellickson unless wowed. Extend qualifying offer, go from there

Now, obviously I have no idea what the returns could be as negotiations heat up. What I will do is let you know about some of the more intriguing options that Klentak could look to acquire from these three teams if he was to agree to a deal.

The Rangers signed Taveras with a $2.1 million bonus, and is known as one of the best all-around athletes in his international class.

Like his cousin, former big leaguer Willy Taveras, he stands out most for his speed. Leody is more of a plus runner while Willy was a burner, but the younger Taveras has the potential to do more damage at the plate. He’s a switch-hitter with a good stroke from both sides of the plate and the potential to produce 15 or more homers per year once he matures physically.

Signed as a 16-year-old from the Dominican Republic, Taveras is both raw in many phases of the game and advanced for his age and background. He’ll need to improve his pitch recognition and his center-field defense, and the Rangers are so confident that he’ll do so that they may bring him to the United States during his pro debut in 2016. He also has a solid arm that will allow him to play all three outfield positions if needed.

Morgan is an advanced hitter for his age, recognizing pitches and controlling the strike zone better than most and producing line drives to all fields. He barrels balls easily and has a quick right-handed bat, so he might reach double digits in home runs once he gets stronger. He has average speed that plays well on the bases but won’t result in many steals.

Though Morgan saw more action at second base (maybe a future position with the Phillies?) in his pro debut and third base in 2015 because Texas has so much shortstop depth, the Rangers believe he can play short. While his range is average, he has good instincts, reliable hands and a solid, accurate arm. Texas tried him as a catcher during instructional league and may give him more exposure behind the plate.

The youngest player (age 19) on Cuba’s 2013 World Baseball Classic team, Ibanez established himself as one of the better young hitters in his nation. He had a long track record of performing in international youth and junior tournaments for Cuba, and he batted .283 in three seasons in the island’s top league at ages 18-20. Ibanez defected in 2014 and signed last July for $1.6 million.

Ibanez has advanced ability at the plate, repeatedly barreling balls and using the middle of the field. He employs a compact right-handed swing and controls the strike zone well. Ibanez can drive the ball, but most of his power will come in the form of doubles rather than home runs.

Though Ibanez won Cuba’s version of a Gold Glove as an 18-year-old in 2011, he’s more dependable than flashy in the field. The Rangers may give him some time at shortstop, but his average arm strength and quickness are better fits at second. Ibanez’s game has drawn comparisons to that of All-Star Howie Kendrick’s.

Cleavinger drew mixed reviews from scouts as Oregon’s closer, with some viewing him as potential late-inning reliever with a power arm and others seeing him as a lefty specialist with poor command and less than explosive stuff. The Orioles clearly saw enough of the former to make him their third-round selection in the 2015 Draft.

Cleavinger boasts a plus fastball from the left side, one that will touch 96 mph but typically sits in the 89-92 mph range. His curveball is an average pitch when he stays on top of it, registering in the low 70s with good shape and depth, and he’ll need to develop a usable changeup to avoid being relegated to a LOOGY.

Cleavinger’s stuff tends to play up because he has a deceptive delivery and hides the ball well. The effort in said delivery does raise questions about his overall strike-throwing ability, but the fact that he’s naturally tough to barrel gives him some margin for error. While the Orioles are considering developing him as a starter in 2016, Cleavinger, with his two average-or-better pitches and deception, has greater impact potential out of the bullpen.

An Orlando area high school infielder who played not far from 2015 top high school prospect Brendan Rodgers, Mountcastle showed the Orioles enough for them to think he was worthy of being taken with the last pick of the first round. After signing for below slot value at $1.3 million, Mountcastle played well enough in the Rookie-level Gulf Coast League to earn a late-season promotion to Class A Short Season Auburn.

Mountcastle stands out most for his hitting ability. A right-handed hitter, he has a loose swing that can get too one-dimensional at times, leading to some swing-and-miss, but he does a good job of making adjustments to make consistent contact and already demonstrates feel for using the whole field. His bat speed generates impressive exit velocity when he barrels the ball, and scouts believe his above-average raw power eventually will translate to average pop in games.

Tall and athletic, Mountcastle has average speed that aids him on both sides of the ball. The Orioles intend to develop him as a shortstop, and he spent most of his pro debut at the position. However, with limited range and below-average arm strength, some scouts believe he’ll ultimately end up at third base or in the outfield.

Taken by the Orioles in the eighth round of the 2013 Draft after four years at Notre Dame, Mancini has done nothing but hit as a professional. He enjoyed a monstrous breakout campaign between Class A Advanced Frederick and Double-A Bowie in 2015, winning the organization’s Player of the Year award after he paced the Minors in hits (182), finished third in hitting (.341) and achieved career highs with 21 home runs and 43 doubles. He did most of his damage at Bowie, where he led the Eastern League with .359 average and accrued 45 of his 70 extra-base hits.

Mancini has an advanced feel for hitting, as his strong hands and wrists give him excellent barrel control and allow him to utilize the entire field. His natural approach is to stay up the middle of the field or go the other way, and he’s strong enough to drive the ball over the fence to any part of the park. He started turning on the ball more last season, and it in turn helped him tap into his plus raw power with greater frequency. Mancini also does a good job managing the strike zone, and the Orioles love his ability to process the game and make swift adjustments.

Mancini doesn’t have much athleticism to his frame and is a below-average runner, but he’s worked hard to become at least an average defender at first base. With his potential to hit for average and power, the club believes Mancini can compete for the first-base job during Spring Training.

Naylor became the highest-drafted Canadian hitter in 2015 when the Marlins picked him 12th overall. He shot up the boards late in the spring behind a strong showing for the Canadian Junior National Team, and after signing a below-slot $2.2 million bonus, he continued to showcase his hitting ability in the Gulf Coast League with a .327/.352/.418 batting line over 25 games.

Naylor’s bat has the potential to be special. His calling card is his plus-plus raw power from the left side of the plate, but it’s his natural feel for hitting which has allowed him to apply it in games as a teenager. The Ontario native makes hard contact to all fields thanks to his plus bat speed and excellent hand-eye coordination, and he also keeps the barrel in the zone longer than most young sluggers. Naylor does not have much swing-and-miss to his game in spite of an aggressive approach, but he’ll need to become more selective as he moves up the ladder and sees better secondary pitches.

Though a good athlete for a player his size, Naylor’s bottom-of-the-scale speed limits him to first base, where scouts project him as a below-average defender. It’s a difficult profile to fulfill, but he could make it work, with the ceiling of a middle-of-the-order hitter capable of hitting 30-plus home runs annually.

Originally signed by the Giants in 2009, Flores led all Minor Leaguers with an 8.1 K/BB ratio during his 2013 full-season debut at Class A Augusta. He wasn’t able to repeat that otherworldly performance the following year in the California League, and San Francisco traded him to Miami as part of the Casey McGehee deal in December 2014. Flores bounced back in his first season with the Marlins, pitching across two levels before making his big league debut in early June.

Flores operates at 89-93 mph with his fastball as a starter, and he commands it to both sides of the plate. His above-average changeup is his best secondary offering and helps him neutralize left-handed hitters, and he’s also adept at mixing in a curveball and a slider, although neither pitch projects to be better than average.

As someone who features more command than stuff and has little projection remaining, Flores’ ceiling likely will be limited to that of a back-of-the-rotation starter. After appearing in seven games (including one start) for Miami in 2015, Flores should find himself back in the Major Leagues at some point this season.

Telis was shortstop as an amateur in Venezuela, but he moved behind the plate after signing with the Rangers for $130,000 in 2007. He underwent Tommy John surgery in 2010 and then stalled out for several years in mid-Minors before finally making his big league debut in ’14. Telis returned to Major Leagues last July and appeared in six games for Texas before it sent him to Miami as part of the Sam Dyson trade.

Telis stands out for his consistent bat, which has produced a .311 average over 119 games at the Triple-A level and a .292 clip over parts of eight Minor League seasons. He’s a switch-hitter who makes a lot of line-drive contact from both sides of the plate and uses the whole field. Telis has below-average power and has tallied double-digit home runs just once in his pro career.

Telis is an average defender who’s cleaned up his receiving skills as he’s progressed through the Minors. His athleticism shows up in blocking ability, while his average arm strength plays up thanks to his consistent footwork and quick release. Telis will have to make even greater strides at the plate to profile as an everyday catcher in the big leagues, but he has the defensive chops and the contact skills to be a quality backup.