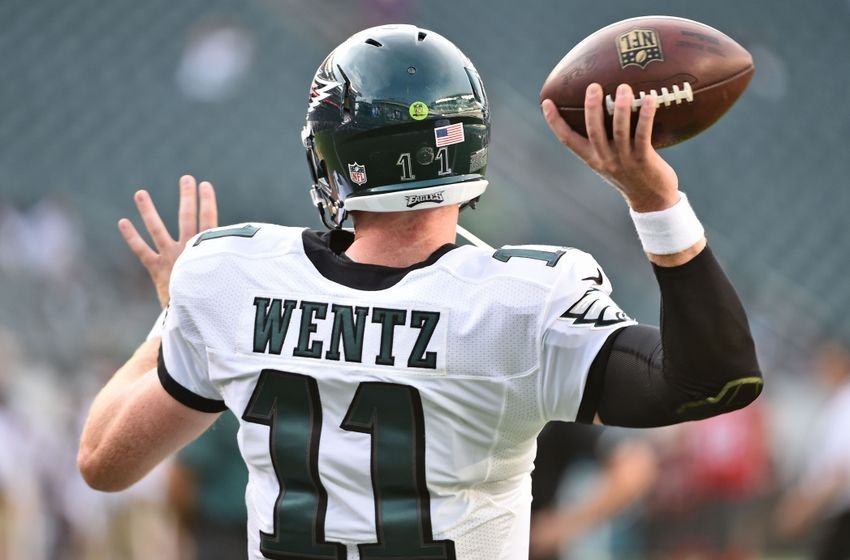 If Brad Childress thinks Carson Wentz is the “holy grail” of quarterback prospects, I guess that makes him Ginger Jesus.

Kevin Clark of The Ringer wrote a riveting piece about spread offenses being everywhere in the college game and what it means for the NFL.

Childress, meanwhile, believes the current holy grail is the prospect who ran spread plays at the college level that can be easily imported to the pro level. He mentioned Eagles rookie quarterback Carson Wentz, who at North Dakota State played in a multiple-style offense that incorporated spread concepts. Childress was impressed that Wentz played under center sometimes and in the shotgun at other times, and that regardless of the formation, he was adept at making various throws. He said some of the sweep plays Wentz ran were particularly impressive, and that he wants to incorporate what he saw into the Chiefs’ game plan.

I, like Howie Roseman, believe what Childress stated is where the NFL is going.

Eagles executive vice president of football operations Howie Roseman, who took Wentz second overall in the draft, called his college system “a pro-style concept that hints at where the sport is going.” Roseman, like Spielman, said that changes in the college game have forced him to alter how he evaluates passers: Because the college game is so different from the NFL game, Roseman is forced to put less emphasis on tape and more emphasis on test scores and smarts.

The new era of quarterback has been seen with signal callers like Aaron Rodgers, Andrew Luck, Russell Wilson and Cam Newton. These are players that use their mobility to their advantage to keep plays alive and keep their eyes downfield looking for the open receiver. They can throw from the pocket and out of it. Wilson and Newton take it a step further with their ability to run the read-option.

This is what I’m talking about.

Wentz steps up in pocket, keeps eyes downfield and delivers a strike to Ertz for first NFL completion. pic.twitter.com/v3Y3wjntv7

And when the receiver isn’t open, Wentz will take off and run.

You better get down Carson lol pic.twitter.com/KELrPiISkh

Childress also talked about which quarterbacks have the steepest learning curve.

Childress said the quarterbacks with the steepest learning curve are those who played in no-huddle spread schemes. He believes this is the one place where there can be only so much compromise: Because NFL defenses are more complicated, information-heavy play calls in the huddle are crucial. Spread quarterbacks, meanwhile, typically communicate with hand signals or one-word calls. NFL teams have attempted to replicate their college brethren over the past five years by occasionally opting for no-huddle looks as a curveball, but it’s still a change-of-pace exception, not the norm.
“[College spread quarterbacks] never had to say ‘red switch right closed end right split z halfback flat’ — they don’t know who to talk to when and when to take a breath,” Childress said. That’s hardly the only challenge: “You don’t realize how big a problem the center-quarterback exchange is,” Childress said, “until the ball is rolling on the ground at practice and you’re saying ‘Oh my god.’”

The read-option took over the NFL a few years ago and Colin Kaepernick was the face of that phase. Unfortunately, as defenses caught up, Kaepernick hasn’t been able to adjust due to his lack of pocket presence and innaccuracy throwing the ball.

Wentz doesn’t seem to have that problem. He’s not only mobile, but accurate from the pocket and is smart enough to realize when to throw it and when to take off and pick up yards on the ground.