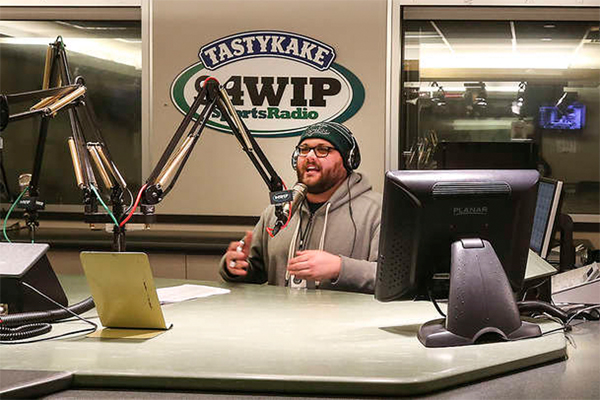 Yesterday, WIP reportedly fired its afternoon drive host, Josh Innes. It was later confirmed by a WIP spokesperson. Many think it was because of the over-the-top reaction Innes had on Tuesday’s show to the whole ‘Dwayne from Swedesboro’ drama from 97.5 The Fanatic. And while that might have been the straw that broke the camel’s back, PhillyVoice is reporting Innes’ unceremonious removal from the station was due to a culmination of things.

According to the report, Innes was labeled a “creep” from a source at the station, who also told PhillyVoice that Innes and former program director Andy Bloom basically had a plan to make him the afternoon drive host when he was hired to do nights.

Another source close to WIP told PhillyVoice that Innes’ personality and antics had been wearing on others, including on-air hosts and management. It also caused a local establishment to ban their afternoon show from broadcasting there because of the way he treated its staff, putting in jeopardy a larger partnership that, had it collapsed, would have cost them quite a bit of money.

“He was just a real creep [to them],” the source said.

But he was also a creep around the studio, and immediately upon his arrival at the station, began working with then-program director Andy Bloom to plot not just how they were going to take out Missanelli, but their own hosts as well.

From the second he got there, he and Bloom seemed to be making plans, another source close to the situation said. Although he was originally hired as the night guy, it was pretty clear to those at the station that he was actually hired to be the afternoon drive guy. Innes would apparently arrive three or four hours early and listen to old Howard Stern segments from the late 80s and early 90s when he would attack then-WMMR host John DeBella along with Bloom while the two plotted how they were going to go after Missanelli.

He was also known for badmouthing other WIP hosts when he was working at night, a fireable offense at most stations. According to sources, however, this was not only permitted, but was encouraged by Bloom.

“That just tells you how things were there,” he added.

It’s part of the reason many at his own station listened to the competition, Missanelli, during Innes’ timeslot.

I met Josh and I don’t think he’s a bad dude. Did I think he was over-the-top on the airwaves many a time? Absolutely. That was part of the charm about him when he started at WIP in 2014. But it increasingly wore on listeners, myself included. Terrestrial radio is a hard business, and he was just the latest casualty. But he’ll bounce back and land with another station, I’m sure.

As for the fill-in, it wouldn’t surprise anybody if WIP tabbed Howard Eskin to replace Innes in the afternoon drive. Mike Missanelli was winning a heated ratings battle before Eskin decided to step down from his daily show in 2011, but Eskin has gone on record saying he’s going to focus on WIP duties for football season. They could easily slide him in there for the Eagles’ season – Eskin is the sideline reporter for Eagles games on WIP and probably would have some interesting bits during the season.

I’m not sure anyone wants to hear that for an extended period of time, though. It’ll be interesting to see what WIP does. It’ll be their fourth different afternoon show lineup since the beginning of 2015.