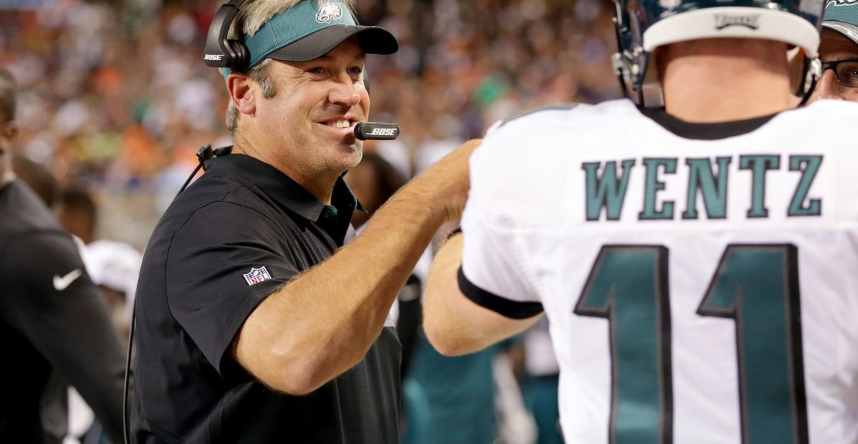 There are no words right now for the excitement level I have for our Philadelphia Eagles. The entire city and fan base are buzzing, all smiles, and seemingly washed of all the negativity that was thrust upon us by the Chip Kelly Era. So, clearly reading through all of the tweets and online madness was fun. Here are some of the best so that you don’t need to spend hours sorting through the madness like I did.

Oh, and for any NFC East fan bases that are hating on us and saying, “You only beat the Bears and Browns, they suck,” … you can jump off a tall bridge!

Doug Pederson call offensive plays like i do in Madden.. I can dig it lol

Eagles hunt down the Bears for the victory! https://t.co/hbpw1arJu0

I would hate to play Doug Pederson in Madden

Doug Pederson just won me a fantasy football game by going for it on 4th down up 29-14. I’m all on board with Pederson as head coach.

Eagles and Bears. These are two of my favorite animals right here, man. It’s like watching football and National Geographic at the same time

My excitement level with every @cj_wentz drive is like ??? pic.twitter.com/53IrSvOZAg

If I was an Eagles fan my excitement level might cause an erection. QB is gonna be a baller. It’s MNF yet his poise looks like a vet

Is Cutler physically hurt? Or is he in his feelings? Hard to tell #Eagles

Eagles up 22-7 heading into the 4th pic.twitter.com/LDj1d3qpwR

Eagles’ handling of quarterbacks this offseason drew a lot of criticism. At least for right now, they look like geniuses.

Philadelphia cheesesteak place is announcing it will give one free cheesesteak per customer if Eagles win Super Bowl. Take a breath, guys.

Only ONE Rookie had gone into Soldier Field in the last 15 yrs & won before Wentz. Russell Wilson who’s been to the SB twice now #JustSaying

Eagles fans are the best. pic.twitter.com/MmTgsCE7zG