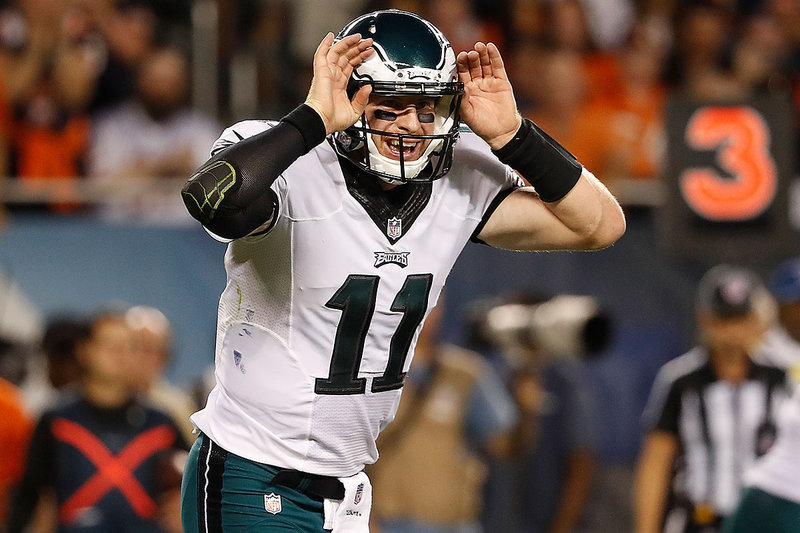 One hundred and 44 days ago when he was selected No. 2 overall at Auditorium Theater in Chicago, Carson Wentz was not supposed to be in this position.

But here he was.

Unfazed by the bright lights at Soldier Field and undeterred by the roaring crowd in his first NFL road start and primetime game, Carson Wentz survived his first NFL grind. And in front of The Grinder himself on Monday Night Football.

Wentz was 21-of-34 for 190 yards and a touchdown and the Philadelphia Eagles pulled away from the Chicago Bears 29-14 in the Windy City.

“Throughout the week, I realized I’m going back to where my life changed, so to speak,” Wentz said. “It was cool to be back here, especially to come out of here with a win.”

The North Dakota State product was cool, calm and collected again, confidently audibling at the line of scrimmage and putting the Eagles into a better position to make positive gains.

“He took care of the football and made some nice, tough throws. It wasn’t perfect. But at the same time, he’s seeing things really well. And he’s commanding the huddle and dialog on the sideline with the players and coaches is something that a nine or 10-year vet would do,” Eagles head coach Doug Pederson said.

If you want to get a good glimpse into that grind, check out Wentz’s play on the Eagles’ first drive of the game. The march took 13 plays and 7:26 off the clock. Wentz converted a 4th-and-2 and also a 3rd-and-7. He slowly matriculated the ball down the field, racking up just 45 yards on 8-of-9 efficiency on the drive.

Another impressive trait although it makes you cringe every time, Wentz’s ability to hang in the pocket and deliver the ball at the last possible second, even if he has to endure a big shot. This is an example of that despite the eventual penalty on Jason Kelce.

This was a hold on Kelce, but one of many times Wentz hung tough in the pocket and delivered seeds. Uncanny out of a rook. pic.twitter.com/JB17kHTvM0

Wentz’s 18-yard rope into triple coverage late in the second quarter was his best play of the night. It helped the Eagles get into field-goal range and them take a 9-7 edge the first-half locker room.

Into triple coverage, no problem. A rope from Carson. pic.twitter.com/6GumhMsi6t

I’ve got a nugget, Wentz is the first rookie quarterback in NFL history to win his first starts and his team not committing a turnover.

“It’s something this offensive prides itself on. Just controlling the ball. Protecting the football. Making smart decisions. Being aggressive but being calculated with that, knowing when to take your chances. We’ve had some fortunate plays, too,” Wentz said.

And how about the night from Trey Burton. Zach Ertz had six receptions for 58 yards in Week 1, gets hurt and Burton steps in to provide five catches for 49 yards and a score. We saw Pederson line him up everywhere during the preseason and saw that again on Monday.

Trey Burton was a huge factor on third downs, here’s a pair from Eagles’ FG drive which trimmed the deficit to 7-6 in 2nd pic.twitter.com/VjeSnbDhBh

Seventh-round rookie Jalen Mills stepped up in the absence of cornerback Leodis McKelvin. He again made a lot of solid tackles, showing instincts wrapping up.

One of what was a bunch of solid tackles from Jalen Mills on Monday night pic.twitter.com/bRs3EN6XoR

Big-play wide receiver Alshon Jeffery was seen as being a huge challenge for the Eagles’ secondary, but he was “limited” to five receptions for 96 yards. That’s more than I could ask for, especially after he got one on the rookie Mills with the stutter and go.

Mills didn’t win them all and many don’t against Jeffery, who roasted him on a stutter and go pic.twitter.com/FhbVQmjbUf

From Arizona Cardinals defensive coordinator Ray Horton to Bears defensive man Vic Fangio, Wentz went 8-of-8 against the blitz going up versus Arizona, then remained patient squaring off against Fangio.

He took what the defense gave him and despite the not-so-eye-popping numbers, Wentz’s patience paid off when Philly forced all three of its turnovers the first 17 minutes to start the second half. The Eagles led 9-7 and upped the advantage to 29-7 midway through the fourth.

The defensive line forced consistent pressure into the Chicago backfield all night, including this instance which led to a Nigel Bradham interception.

Cox in the BF immediately, Curry reads the run and lays the big hit. Brooks pounced on the fumble. pic.twitter.com/WiCFwNzHTN

Ryan Mathews sandwiched a pair of touchdown runs in between Burton’s two-yard score for the Eagles 21 points off the Bears miscues and a 29-7 cushion.

And how about Pederson going for it not once but twice on 4th-and-goal up 15 in the fourth? Gutsy call. So first he gets stuffed at the two, gets a retry following a penalty and Mathews takes it in.

How about Doug going for it on 4th and goal? pic.twitter.com/iXTvb0xWXT

Philadelphia is 2-0 with a gigantic test looming late Sunday afternoon at Lincoln Financial Field against the Pittsburgh Steelers.