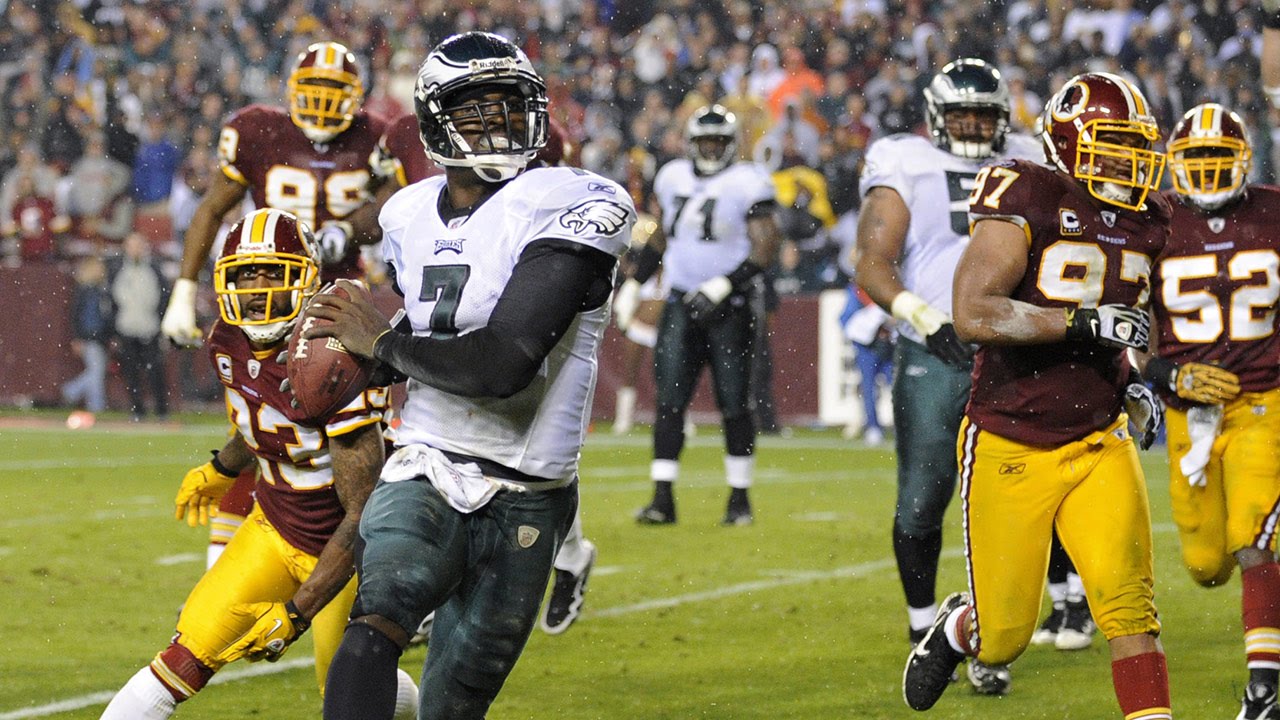 It was supposed to be Donovan McNabb’s big day.

He received a handsome $78 million extension earlier in the afternoon and his big celebration was supposed to take place at night when his Washington Redskins would defeat his former team for the second time in a little over a month.

So much for that.

Michael Vick crashed the party, throwing for 333 yards and four touchdowns while adding 80 yards and two scores on the ground as the Philadelphia Eagles routed the Redskins 59-28 on Monday Night Football in a Week 10 game in 2010.

Vick became the first NFL player ever to throw for at least 300 yards and four touchdowns and running for 50 yards and two scores in a single game. He finished 20-of-28 and completed his first 10 passes for 236 yards and three touchdowns.

Vick won the starting job from Kevin Kolb after Kolb was knocked out of the opening game against the Green Bay Packers with a concussion. Vick held the starting job until Kob returned for the Eagles’ Week 4 showdown against the Redskins, which they lost 17-12. Kolb started four games in a row before head coach Andy Reid decided to hand the reins over to Vick in Week 9.

Vick finished the season with a career-high passer rating of 100.2 and was the second quarterback in league history to pass for over 3,000 yards, run for over 500 and post a passer rating of at least 100. He concluded that year with 3,018 yards and 21 touchdowns to go with just six interceptions, while picking up 676 yards and nine touchdowns rushing.

The Eagles scored touchdowns on each of their first five possessions en route to a 35-0 lead. They outgained Washington 592-375, were 8-of-13 on third down and held onto the ball for 38:11.

Dimitri Patterson intercepted McNabb twice, including one for a touchdown, and Jerome Harrison carried the ball 11 times for 109 yards and a score for the Eagles, who went on to go 11-5 and won the NFC East before losing to the eventual Super Bowl-champion Green Bay Packers in the Wild Card Round.

It only took 18 seconds for the Eagles to strike first. Vick got max protection on a play-action bootleg to the left and the diminutive southpaw hit the burner DeSean Jackson perfectly in stride on a deep post. What a throw!

The Eagles needed just five plays on their second drive to find the end zone again. Jason Avant hauled in a 15-yard reception on a Vick roll to the right, Jeremy Maclin picked up 11 on a reverse, LeSean McCoy took a screen for 27 yards and Vick scampered in from seven yards out to finish the series.

After Kurt Coleman hauled in deflection for an interception, Philadelphia used a 6-play sequence to make it 21-0. Vick scrambled for 13 yards, Jason Avant moved the chains on 3rd-and-5 with an 11-yard reception and McCoy took a shovel pass 11 yards for the score.

Another short trek, this one only three plays, helped the Eagles put another touchdown on the board. Vick completed passes of 12 yards to McCoy and 15 to Harrison before Harrison made several jukes in the open field prior to diving for a 50-yard score inside the right pylon.

By the time the first quarter ended, the Eagles had piled up 280 yards, with Vick beginning 8-of-8 for 181 yards and those two touchdowns. His third TD came on the first play of the second when he flicked a back-footed toss 48 yards down the right sideline to Maclin. Just like that, 35-0!

Washington scored on its next two drives and needed just five plays to do it. McNabb connected with Fred Davis for 71 yards prior to hitting Darrel Young for a 3-yard touchdown in the right flat. One the Redskins’ next possession, McNabb fired a 76-yard completion to Anthony Armstrong to set up a 1st-and-goal and flipped a 6-yard score to Keiland Williams two snaps later to cut the deficit to 35-14 with 9:39 to go until the half.

Philly was able to put 10 more points on the board until the half. Dimitri Patterson intercepted McNabb on a 3rd-and-12 toss intended for Joey Galloway, which gave the Eagles the ball at the 28-yard line. Vick scrambled for 21 yards on a 3rd-and-9 and scored from six yards out two plays later. Vick fired a 27-yard completion to Avant on Philly’s next series, which led to Akers’ 48-yard field goal with 25 ticks to go until the half.

The teams traded touchdowns to start the third quarter. Williams finished off Washington’s opening second half possession with a 4-yard score before the Eagles answered with an 11-play, 76-yard drive. Avant toe-tapped the left sideline for a 20-yard reception, Maclin picked up 26 on a Vick dart on 3rd-and-5 and Vick scrambled for 13 on an ensuing 3rd-and-10. Avant hauled in a 3-yard score to stake the Eagles to a 52-21 margin.

Williams’ 32-yard touchdown accounted for the final touchdown early in the fourth.