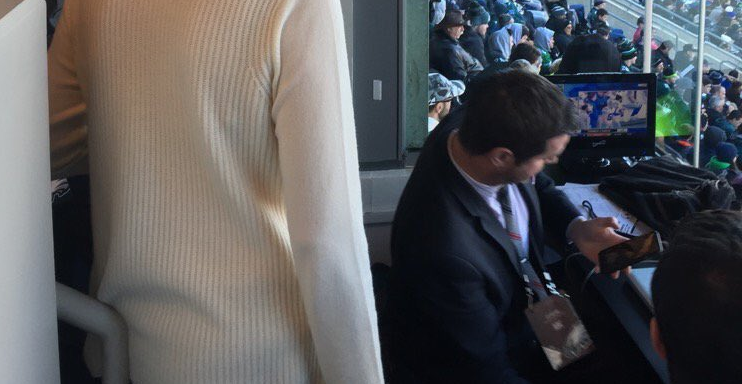 Jeff McLane, so far, has not decided to address his ejection from the Eagles’ press box earlier today during the game on social media. But that didn’t stop his employer, The Inquirer, from responding to the incident. The Inquirer‘s senior vice president and executive editor, Stan Wischnowski, released the following statement, courtesy of Chris Palmer.

RELATED | Jeff McLane Was Ejected from the Eagles’ Press Box

“We find the actions taken by the Eagles media relations staff to be extremely disappointing and unprofessional. Jeff has spent eight years covering the Eagles exhaustively in a fair, accurate and thorough manner. To prevent him from doing his job for something this petty is outrageous. It could have been easily resolved in several ways without ejecting him from the press box.”

McLane noted the argument stemmed from a disagreement between him and Zach Groen, a member of the Eagles’ public relations staff. Groen reportedly told reporters they were speaking too loudly, causing McLane to take issue with that and talk with Groen in another room. McLane described it to Philly.com as “a slight argument, but nothing out of the ordinary.” Fifteen minutes later, the Eagles’ senor vice president of marketing, media, and communications [also a former Inquirer managing editor] came into the press box with a security employee to eject McLane.

Whether you care about this story or not – and, the numbers certainly tell that you do – it’s very fair to question the Eagles’ tactics in this instance. By all accounts from the people in the press box, the “noise” from the press box was louder before the incident and even after the incident, causing many to question why the Eagles singled out McLane. Maybe his discussion with Groen was something out of the ordinary, but as of now, we don’t know what the discussion was about.

McLane usually makes weekly appearance on Breakfast on Broad and 97.5 The Fanatic, so it’ll be interesting to see if he mentions this or goes into detail this week. Or if he’s even on.