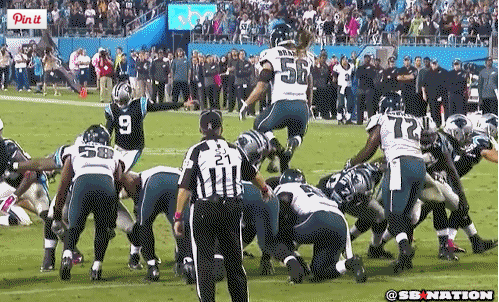 There are many ridiculous rules in the National Football League. We’ve seen many of them play out during Eagles games, and in general, these rule changes over the years have made football less exciting to watch for some. Pass interference on almost every long pass attempt. Hell, sometimes the refs bury the flag when it’s an obvious call. And some of those obvious calls to us, because we have the benefit of super slow motion replays, aren’t so obvious to the guys in stripes on the field.

The Philadelphia Eagles are proposing a rule change that would prohibit players from jumping over the line of scrimmage to block a field goal or extra point. Currently, players can do it as long as they do not materially come into contact with an opponent while jumping. The rule is difficult to officiate, and the strategy can be dangerous from a safety standpoint.

I don’t have a huge problem with this, but, on the other hand, that’s generally how most extra point attempts and field goals are blocked. They make for exciting plays, but safety definitely comes into question when a player launches his body and, at times, loses control of where his body ultimately goes.

There are other rule changes under consideration, as there is every year, but this’ll be an interesting one to keep an eye on, especially because the Eagles are heavily involved.

And, just for the hell of it, here are some of the best field goal blocks.