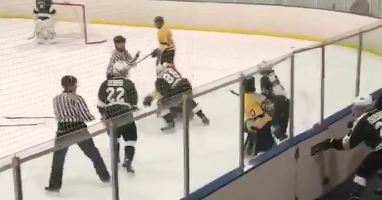 Some old school fans say the game of hockey is too soft these days. After seeing what unfolded on the ice during the Central Bucks West-Ridley high school hockey game, there may be “hope for the future” of hard-nosed hockey. It even got the blood boiling in the stands as well.

UPDATE: Police have opened an investigation into the incident. A player came away with a broken nose.