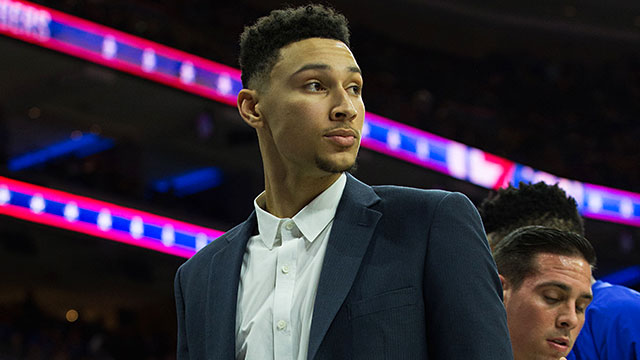 When the Sixers drafted Ben Simmons as the first overall pick last year, there was instant excitement about what was next in “The Process.” Simmons’ constant comparisons to Magic Johnson [which I still say were way too early] were just waiting to be proven correct. He went right into the NBA Summer League and instantly gave us a sample size of his ability to get everyone involved on the court. However, the basket of hope of what could have been came crashing down in a hurry as Simmons fractured his foot during the final scrimmage of the team’s training camp … an injury that was initially expected to hold him out of action for about three months, and, well, we all know how that ended.

We are now pushing towards a new season that sees us sitting with the third overall pick in this month’s draft, and our two franchise talents are sitting on the sideline just trying to get stronger. With it being almost one year after the initial injury to Simmons, we would hope that the healing process has already taken place, especially in Simmons’ case. Unfortunately, besides the acrobatic sideline dunks and trick shots on the practice court, we still haven’t seen him play. This is why I am concerned as to the appropriate reason why he still is not on the court and will not be suiting up this summer to get ready for the 2017-18 NBA season.

When it comes to the Summer League, we already know both Simmons and Joel Embiid have been ruled out. The question I pose is this: Who is really holding him out of action? Is it the team? Or is it Simmons himself?

Before everyone starts jumping over the edge and calling me out, let me first explain why I am asking this question.

Reporters caught up with Brett Brown back in April and asked him if Simmons would play this summer. This was his response:

“I think it would be good if he did, but I wouldn’t say it’s a prerequisite he has to play. I think still his health and the judgment of his health rules the day.”

When he was asked about Simmons being a point guard on this team, he added:

“I do concede the thing that we missed with him not playing after the All-Star Break is, I have this vision that I want to pursue with him as a point guard. Nobody can promise that I’m right. I don’t know either. But I think from what I have studied from truly his childhood, and high school and LSU, I feel confident that we should try this and look at it. We would know a lot more in that regard had he had played and we could know a lot more in a summer league. But we don’t.”

Obviously, this was back in April before we got word of the Summer League decision, but it still makes me wonder if Brown is happy with the decision to hold Simmons out. You have to wonder if it was Simmons himself or people in his camp that are holding him out as either a precaution, or simply because he feels he shouldn’t have to play. Consequently, Brown specifically says that he would have liked him to play in order to get more comfortable with a role he’s still not sure he can play.

Ask yourself the following questions: If Simmons wanted to play in the Summer League, wouldn’t he play? Besides fear, what other reason does the team have for holding him out? Could he not be fully healed? If he is, wouldn’t the fear instead have been dissipated by holding out after the All-Star break?

Pardon me for not believing in the Sixers’ front office when it comes to updated injury reports. These are simply my concerns as a reporter, writer and fan.

Can you blame me?