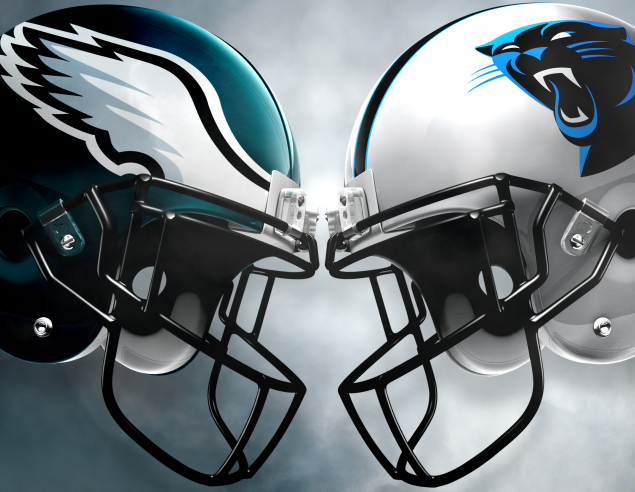 After a string of close wins, the Eagles completely dismantled the Arizona Cardinals at The Linc on Sunday afternoon. Was that an anomaly, or a sign of things to come?

The Eagles now travel to Carolina to take on the also 4-1 Panthers on Thursday Night Football tonight. Both teams coming off a short week could likely spell some ugly football for the viewers. But maybe they’ll surprise us. Cam Newton looks to be back to his 2015 form, the Panthers’ defense may be the most talented one the Birds have faced so far this season, and Lane Johnson’s likely out. It’ll be a tough test for the Birds.

But not impossible by any means.

RELATED: Check out our predictions for last week’s Eagles vs. Cardinals game. How’d we do?

A lot has been made of the strain that a short week brings both with both teams facing the same hurdle. But to that, I say, let’s focus on the matchup. These two 4-1 teams are probably the best Thursday night matchup the NFL will see all year. Both teams have quarterbacks playing at a high level and offenses that present unique matchups. Under that logic, I’ll go with the team who seems to have the slight edge defensively. Especially if Carolina is down a starting safety and maybe a cornerback.

Everything is stacked against the Eagles. Right tackle Lane Johnson is in concussion protocol and won’t play, resulting in Big V facing a defense which leads the NFC with 17 sacks. Fletcher Cox might not play against a Panthers offense that is improving, with young, talented weapons. And the Eagles are traveling on a short week. The Birds are a good team and will be neck-and-neck with the Panthers all season, but Carolina has the slight edge for now.

Did I just click my heels and wind up on the Yellow Brick Road with the Lollipop Guild? I am literally pinching my skin on each running play called as Doug Pederson looks to finally get it. Maybe he listens to the fans too much or he has his own Wizard who is guiding him. Either way, whatever system he has in place is working. The revolving door on the this team because of injuries has proven to be a Stairway to Heaven as the “Next Guy Up” policy hasn’t been this good since the quarterback carousel that included Koy Detmer and AJ Feely.

That being said, the Carolina Panthers are for real. Superman is back and has shown his artillery of weapons on the outside can explode in an instant. This will be a true test for an Eagles secondary that has played exceptional up to this point. The amount of time given to Cam Newton last week was very noticeable and was the driving force behind his success. If Tim Jernigan and co. can hurry his throws, the Panthers will start to implode. Traveling to Carolina on a short week is never an easy thing. However, Carson Wentz and friends are surpassing expectations and this week will be no different. Big V will have his hands full, but the secondary is hurting and all Wentz needs is a few seconds. I’m going green all day!

In a battle for NFC supremacy, the Eagles fly south to Carolina to take on the Panthers. It’s a short week for both teams and the Eagles will be without their starting right tackle, Lane Johnson. Fletcher Cox and Wendell Smallwood are both game time decisions as well.

That said, Doug Pederson is a fantastic gameplanner. I can only think of one game where the Birds weren’t competitive and that was an ugly loss at Cincinnati last season. My prediction is Pederson puts the Birds in prime position to get a prime time win over a top tier opponent. Carson Wentz will shine and the Eagles grind out a 27-20 win over the Panthers to improve to 5-1.

The Eagles have been running the ball effectively and showcasing great balance the last few weeks, but this is a game where Pederson has to let Wentz rip it going against the suspect secondary of the Panthers. You could also say the same about Newton going against the Eagles’ cornerbacks, but I feel like the trio of Robinson, Mills and Douglas have been better than Worley, Bradberry and Captain Munnerlyn. And Worley and Bradberry might not even play after not practicing on Tuesday. This is a statement game for the Eagles and one I think they match up well in. I can see Jeffery breaking out in this one too. Give me the Birds!

Even without Lane Johnson in the lineup, I still think the Eagles are flying under the radar right now. They’re a sneaky good team; something we didn’t see last season. They’ve been tested this season and have passed each one – with the exception of the game in KC. But they almost pulled that one out, and it was against the currently best team in the NFL.

The Panthers won’t be at full strength on defense, either, and I could see this being a high-scoring game. But I think people are sleeping on the Eagles, and they’re better than we think. They get the win tonight.

I’M CALLING UPSET! The Eagles are down a few players and it’s a short week with an away game vs. one of the better teams. Don’t care. Wentz steps up and the passing game moves on short hits and a few deep balls over the middle to Zach Ertz!