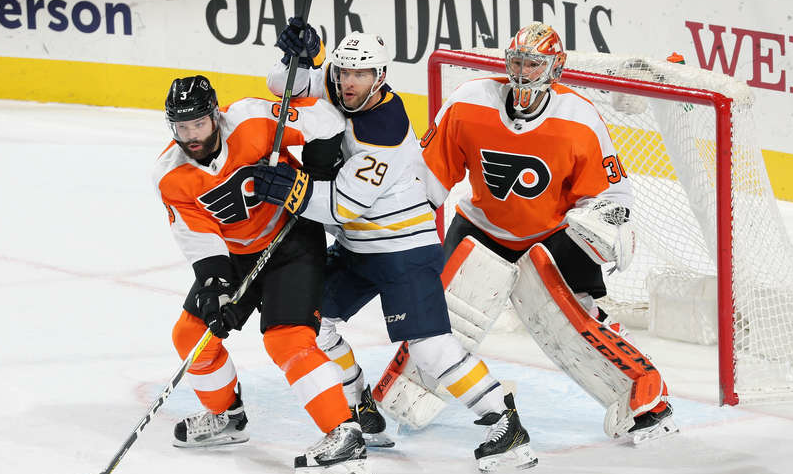 After running over the St. Louis Blues 6-3 on Saturday, the Philadelphia Flyers hit the ice for a tilt against the Buffalo Sabres Sunday afternoon. This had trap game written all over it, but luckily the boys in the Orange and Black pulled out a huge victory.

The Flyers have had a reputation of playing down to their competition and the Sabres, who are second to last in the league gave the Flyers all they could handle. The Sabres went up early 1-0 on a Power Play goal by Ryan O’Reilly and the Wells Fargo center could feel a let down coming.

The Flyers would go on to score four straight goals, two of them empty netters, and Michal Neuvirth who started for the first time in over a month, got the win.

Coming into this game, Neuvirth had a record of 2-5-1 but had suitable stats of 2.67 GAA and a .915 Save Percentage. Neuvirth was able to stop 30 of the 31 shots he faced in his return. He also absolutely robbed Sam Reinhart in the first period of the game which helped turn the tide for the Flyers, had that gone in this game could have been very different.

Neuvirth makes the big glove save and his teammates approve. pic.twitter.com/1fRc3pqwe0

Not only did the Flyers get solid goaltending but their stars showed up to play. Sean Couturier netted his 22nd and 23rd goal of the season, one on the Power Play and one on an empty net. Shayne Gostisbehere tallied his 9th goal of the season and Ivan Provorov put home his 8th for an insurance empty net goal.

That's three straight games with a goal for #14.

Voracek also added two assists on to his season leading tally, he now has 43 assists in 42 games, he also has added 8 goals onto that for 50 points total. Claude Giroux also got an assist to put him on 52 points for the season.

After this game, Giroux and Voracek are now both in the top five for points and assists and Couturier is in the top five for goals. Prior to this year Couturier had a career high of 15 goals, but now is on pace for 45 this year. Interesting how a change in line mates and deployment can change the offensive capabilities of a player.

Even though the Flyers only put two goals passed Robin Lehner, they were able to secure the win which is something they have not done against teams lower than them in the standings. It is a great to see a showing like this from the Flyers to kick off the second half of their season.

The Orange and Black will take their bye week over the next fives days and come back on Saturday against the red hot New Jersey Devils in a battle of Nico vs. Nolan.