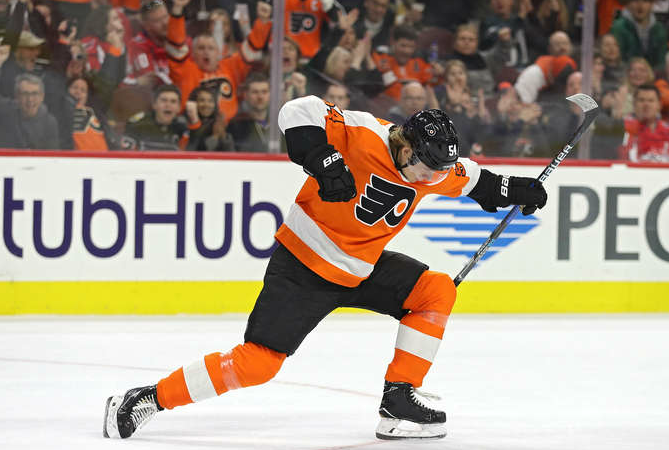 The Flyers desperately needed another win Sunday against the Washington Capitals after coming back in the third period Sunday to get a win over the Carolina Hurricanes.

Well, they did just that.

The Capitals came into Philadelphia with a chance to not only further their first place positioning but also to put the Flyers into a position where they would be scratching and clawing their way for a playoff spot. As it turns out, at least today, that’s not the case.

Whenever the Flyers play the Capitals, it seems like it’s always a high-scoring, exciting affair, and Sunday’s game at the Wells Fargo Center did not disappoint. After neither team scored in the first period, it seemed like it was going to be a goalie battle – Petr Mrazek for the Flyers vs. Philipp Grubauer for the Caps. But once the second period hit, the Flyers let the Capitals know they would not be an easy opponent.

Shayne Gostisbehere scored 2:15 into the second period only to be answered by Alexander Ovechkin 13 minutes later. Then Oskar Lindblom did what we have all been expecting since he was called up, he scored a beauty of a goal.

Lindblom gets his first pic.twitter.com/cqOvojuSa7

That goal propelled two more goals, one from Ivan Provorov and one from Wayne Simmonds. One goal came at the end of the second and the other at the beginning of the third.

Both teams would then go on to trade more goals before the game ended, but that goal from Lindblom is what got all the fans in the Wells Fargo Center going and it is what propelled the Flyers to a much needed victory.

The Flyers retain their spot at third in the Metropolitan Division, but the Devils have two games in hand and the Panthers, who are currently out of the playoffs not by much, have four games in hand.

The Flyers still control their own destiny and after a closed-door meeting after the loss to the Columbus Blue Jackets, they’ve won two in a row and look reinvigorated for the stretch run.

Travis Konecny played a hell of a game and got beat up by the Caps, whether it was by blocking shots or just taking big hits. In the third period, he’d had enough.

Simmonds potted two goals, and there was offensive help up and down the lineup. Mrazek still looks shaky at times, but if Brian Elliott can come back 100% healthy and the Flyers catch their stride at the right time… look out.