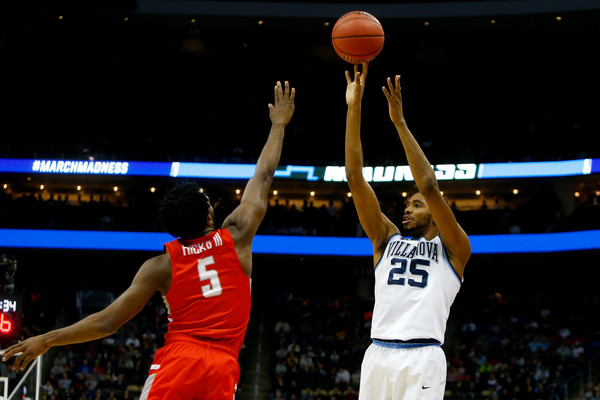 The Villanova Wildcats have looked dominant thus far into the NCAA Tournament.

Nova absolutely handled 16 seeded Radford in the first round of the tournament, something that only one other team in history hasn’t done. *cough cough*.

The Wildcats had a bit of madness of their own in the round of 32 when Alabama kept pace with them in the first half. Then Mikal Bridges came alive in the second half and his team made it to the Sweet 16 with ease.

The other key to Villanova’s success rides on Mikal Bridges playing a full game, not just a second half like the Alabama game. If he can’t be effective, Donte DiVincenzo needs to play well coming off the bench.

While WVU is Nova’s biggest threat thus far in the tournament, Nova should be able to take their best punch and get to the Elite 8. On paper, obviously, Villanova is the better team. This tournament, more than any in recent memory, has proven that anything can happen on the court. For the first time ever a 16 seed beat the 1 seed. Kentucky is the highest seed remaining in the South at 5. # 7 Nevada came back from 20 points down in the second half to beat #2 ranked Cincinnati 75-73. Loyola-Chicago, an eleven seed, hit two (!!) buzzer beaters to beat Miami and Tennessee to make it to the Sweet 16. This is why the tournament is called “March Madness”.

That said, the Wildcats have been one of the best teams in the nation all season long. They’re one of the more consistent teams left in the tournament. This is in large part due to their coach Jay Wright. Coach Wright is one of the better coaches in college basketball and has his team running like a well-oiled machine. The moment is never too big for Jay Wright or his Villanova Wildcats their 32-4 record speaks for itself. He even believes they are playing their best basketball in March. Hear it in the interview below.

Hear what @VUCoachJWright had to say after yesterday’s 81-58 win over Alabama! #LetsMarchNova #NovaNationAllAccess #MarchMadness pic.twitter.com/jOYveftTRx

Villanova is taking on West Virginia on Friday night in Boston. With a trip to the Elite 8 on the line I think Nova will handle their business and move on. Book it.