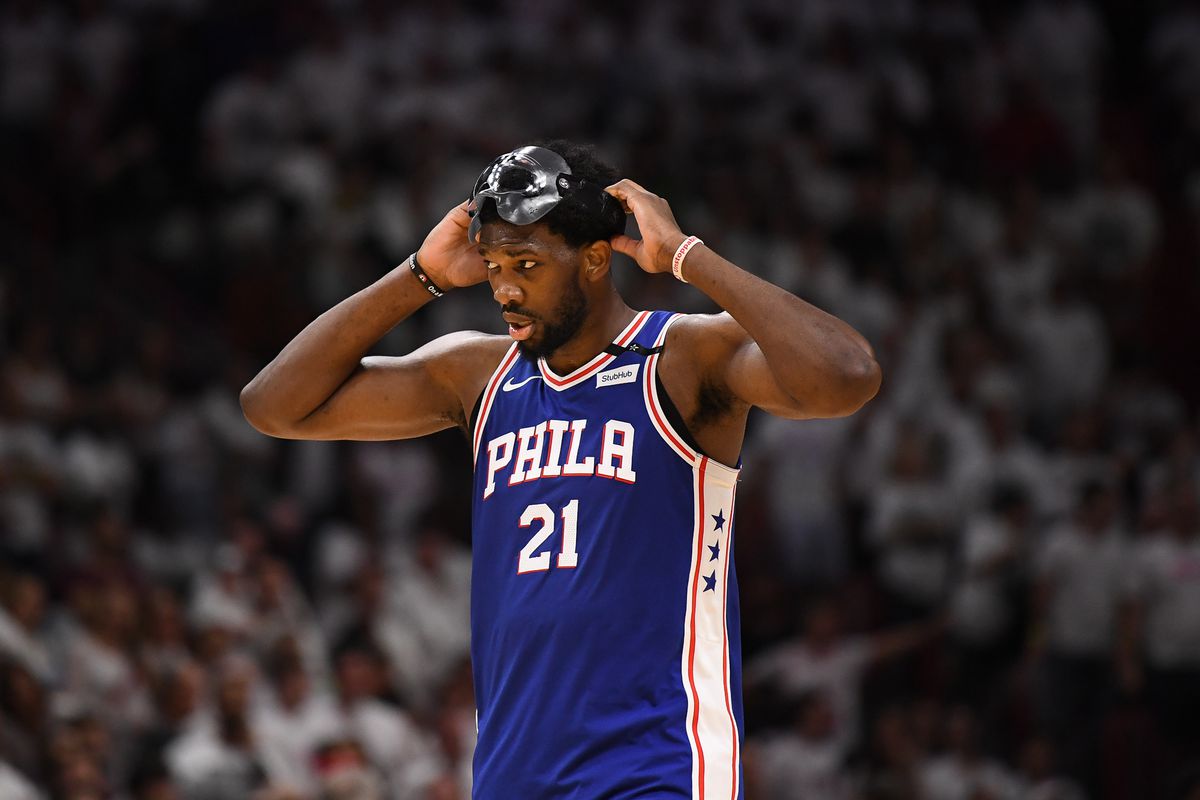 The process of elimination has begun.

Meek Mill got the night going by ringing the bell at Wells Fargo Center a few hours after he was released from prison and the Philadelphia 76ers followed by closing out the Miami Heat. Joel Embiid had 19 points and 12 rebounds as the Sixers took down the Heat 104-91 to win their Eastern Conference first-round series in five games on Tuesday night.

The 30-year-old “Dreams and Nightmares” rapper Mill was released from a state correctional institution in Chester, Pennsylvania on Tuesday after serving five months for a probation violation on a gun and drug case that’s nearly a decade old. His first destination out of prison was the Sixers game.

Sixers co-owner Michael G. Rubin picked Mill up from jail and joined him at midcourt, along with comedian Kevin Hart, for the ringing of the bell. Mill wore an Embiid jersey for the pre-game honor and came out to a standing ovation after being introduced by the PA announcer.

The crowd was electric prior to the game, but the first half quieted them down as the contest was tied at 46-46 heading into the break. Goran Dragic woke them and the Sixers up in the third quarter.

Philadelphia led 50-48 at the 9:32 mark of the third when Dragic turned the ball over to Ben Simmons and slapped the back of his head as he chased down the loose ball and dribbled it to the other end of the floor. The Sixers scored the next nine points shortly thereafter as part of an 11-0 run to stake them to a 57-48 advantage. It was reminiscent to Game 4 when Justise Winslow sat on Ersan Ilyasova when he was laying out of bounds in the third quarter of that contest and the Sixers subsequently went on a 14-0 flurry.

This series has been filled with a lot of cheap shots from Miami's end, Dragic the culprit here with his slap to the back of Simmons' head pic.twitter.com/c8IjQSG7lH

The Sixers outscored Miami 34-20 in the third and led by as many as 18 in the pivotal frame as they took an 80-66 cushion in the fourth, where the Heat exemplified more of their cheap and dirty tactics. This time James Johnson was the culprit as he double clotheslined Marco Belinelli and J.J. Redick midway through the fourth.

James Johnson with the double clothesline on Belinelli and Redick. I can't believe how cheap and dirty this Miami Heat team has been this series, it's utterly embarrassing! pic.twitter.com/QF6BWIxVaa

Simmons recorded 14 points, 10 boards and six assists, while Redick netted 27 points for the Sixers, who won their first playoff series since 2012 when they were a No. 8 seed and upset the top-seeded Chicago Bulls.

The process of elimination has begun! Sixers extinguish the Heat in 5.

Boston or Milwaukee is next in the Eastern Conference semifinals. pic.twitter.com/LUvmu6I2aq

Philadelphia will face either the Boston Celtics or Milwaukee Bucks in the Eastern Conference semifinals. The Celtics took a 3-2 series lead over the Bucks with a 92-87 victory in Boston on Tuesday.