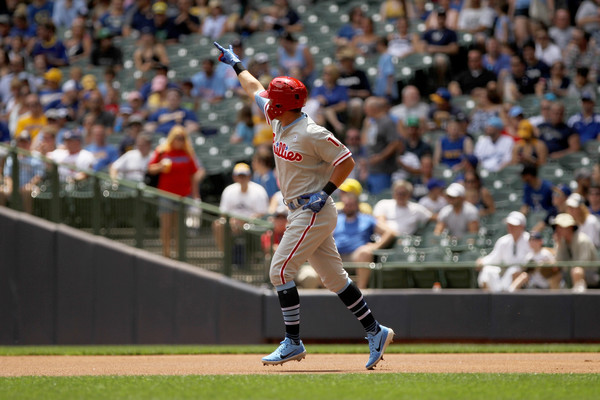 Just when Phillies fans thought their beloved Fightin’ Phils were under-represented at the All-Star week, it was announced that Rhys Hoskins will participate in the Home Run Derby. ESPN’s Home Run Derby bracket show broke the news late Wednesday night.

John Stolnis took the news to Twitter through a series of tweets:

Rhys Hoskins is going to be in the HR Derby!

ESPN is announcing the brackets for the HR Derby, and Rhys Hoskins is in it!

Hoskins will face Jesus Aguilar in the first round bracket of the Derby.

The Phillies made the announcement official after their game against the Mets.

Not much we love more than Hoskins and homers — Get ready for @rhyshoskins in the Home Run Derby! pic.twitter.com/OmYDhya3wB

Per ESPN, Aguilar vs. Hoskins is the 1 vs. 8 matchup. As usual the Philly representative is the underdog. This season Hoskins has 14 home runs compared to Aguilar’s 23.

This news immediately upgrades the Home Run Derby to must watch TV. I feel an upset coming.

Stay tuned to Phillyinfluencer.com for updates on the All-Star game and trade deadline updates.