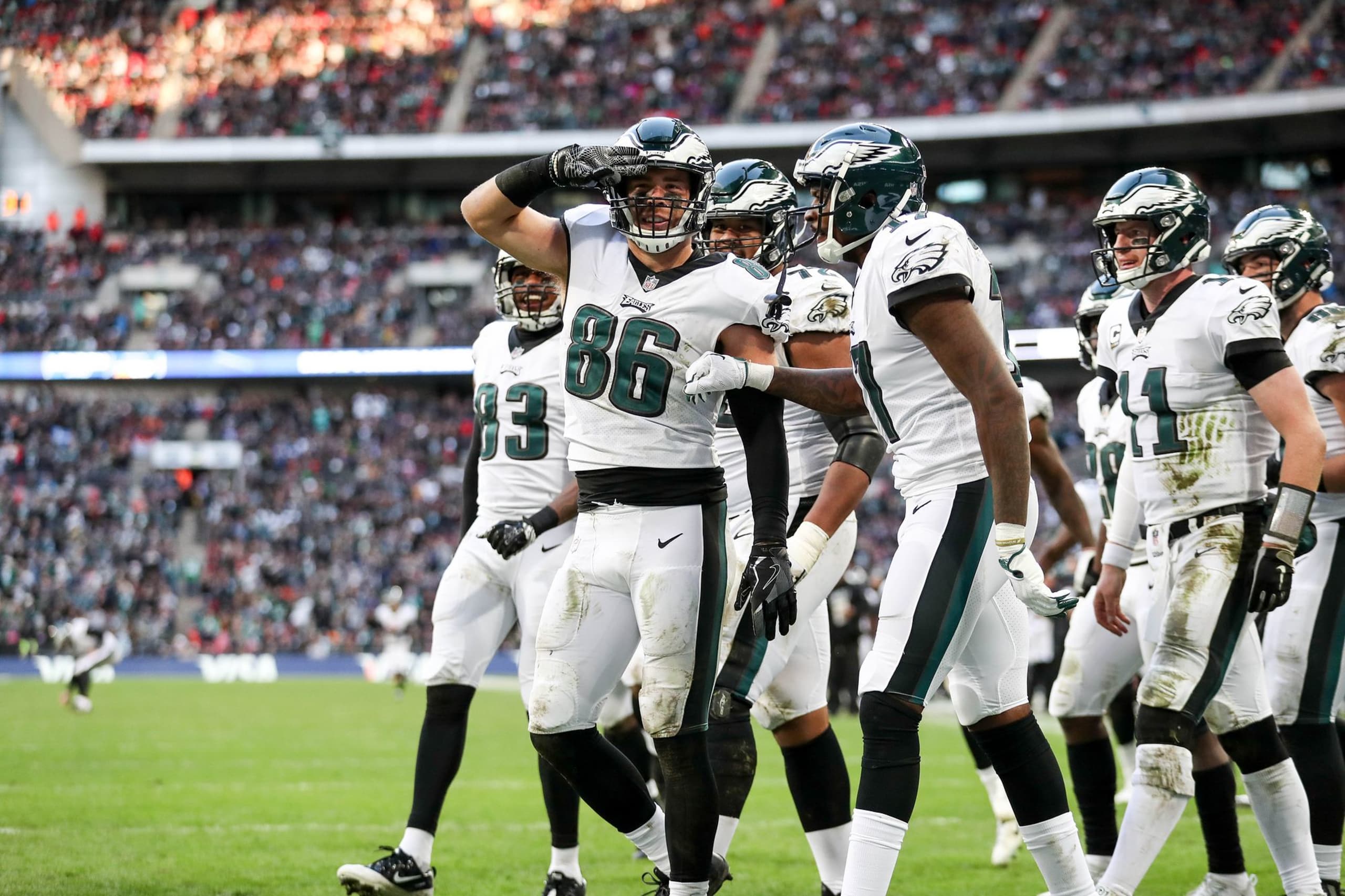 The Ben Franklin Bridge hasn’t fallen down just yet.

Carson Wentz threw three touchdown passes and the Philadelphia Eagles hung on for a 24-18 win over the Jacksonville Jaguars in a Week 8 showdown from London, England.

Wentz, who overcame a fumble and red-zone interception over his first two possessions, finished 21-of-30 for 286 yards. He was a big reason why Philly began the game 7-of-9 on third down. It finished 7-of-12. Wentz got battered and bruised again and sacked four times as he was dropping back behind a makeshift offensive line, which was attempting to make up for the losses of Lane Johnson and Jason Peters. Halapoulivaati Vaitai came in to play left tackle, Isaac Seumalo moved from left guard to right tackle and Stefen Wisniewski filled in at left guard.

The game played out to a familiar script. The Eagles built a comfortable margin, this time 17-6 late in the third quarter, before the defense began to bend. Blake Bortles and the Jaguars receivers were simply not good enough to make them break. Wentz led the Eagles briskly down the field on a clutch drive in the fourth quarter after the Jaguars pulled within 17-15. Wentz fired a 36-yard completion to Jordan Matthews to begin the march.

Matthews led the Eagles in receiving with 93 yards on four receptions as he took advantage of a depleted Jaguars secondary, which was without A.J. Bouye, Tyler Patmon and D.J. Hayden. They were down to Dee Delaney after fellow undrafted rookie Quenton Meeks departed with an injury. Zach Ertz capped the 6-play, 75-yard trek with a 5-yard touchdown.

Carson Wentz hits Zach Ertz for his 3rd TD of the day pic.twitter.com/7O5r2P0lC4

A 37-yard wheel route out of the backfield by T.J. Yeldon on Jordan Hicks on a 3rd-and-4 got the Jaguars into Eagles territory to the 21, but the drive stalled inside the 10 as D.J. Chark dropped a touchdown on 3rd-and-goal. Jacksonville settled for a 24-yard Josh Lambo field goal to pull within 24-18 with 7:00 to play.

The Jags then forced a quick three-and-out. Josh Adams nearly fumbled on the first play, but was ruled down by contact, and Doug Pederson kept it safe with a 3rd-and-13 screen call to Nelson Agholor.

Jacksonville converted a 4th-and-1 on its ensuing series to keep the drive going, but were unable to move the chains on a 4th-and-2 to give the ball back to Philly. A big hit by Rasul Douglas, filling in for an injured Jalen Mills, led to an incompletion on third down prior to a Bortles scramble on fourth.

Big hit by Rasul Douglas on 3rd-and-1, but Blake Bortles picks up the first with his feet on 4th-and-1 pic.twitter.com/02pjvbQV90

The Jags didn’t move the sticks again. Fletcher Cox batted the ball down on 3rd-and-2 and Donte Moncrief was blanketed by Ronald Darby on 4th-and-2.

Fletcher Cox bats it down on 3rd down and Ronald Darby all over Donte Moncrief on 4th down pic.twitter.com/Pabnqtj8Ne

The Eagles picked up a key first down through the air when Wentz rolled to his right and found Matthews sitting down in the zone.

Big 1st down as Carson Wentz rolls to his right and finds Jordan Matthews, who sat down in the zone. pic.twitter.com/WhcZ4tOw8n

Wendell Smallwood puts it away and the Eagles get back to .500 at 4-4. pic.twitter.com/oLSHte7vyX

I really liked what I saw from Adams on the ground. The Jaguars are susceptible to giving up yardage up the middle to bigger backs, but Adams showcased vision and quick feet. Wendell Smallwood averaged just three yards per carry, 24 yards on eight runs, and Corey Clement and even worse 1.5 with six yards on four totes.

Adams averaged 6.8 yards per carry. He needs to start getting the rock more.

Huge gaping hole for Josh Adams and he rumbles for 21 yards pic.twitter.com/De1I7JBKry

Avonte Maddox also had a big game, making a pair of key plays. He stuffed Carlos Hyde off the edge on a 3rd-and-1, and put his helmet on the ball to force a turnover.

Maddox gets his hat on the ball and forces the fumble. Two big plays from him today. pic.twitter.com/YIr0ln4PPa

Alshon Jeffery was targeted just five times, but accumulated four receptions for 35 yards. Two of those receptions moved the chains on third down.

Alshon Jeffery fights for the 1st down on 3rd-and-6 pic.twitter.com/7q0SoKCT93

While the defense continues to play soft when playing with a lead in the second half, I did think Jim Schwart brought more exotic blitzes this week. Malcolm Jenkins had a big game blitzing off the edge, which allowed his teammates to converge and rack up sacks after he was forcing Bortles to step up in the pocket. Bortles was sacked four time in all.

Jim Schwartz brings the heat on 3rd-and-8. Jenkins comes off the edge, which forces Bortles to step up and Long finishes him off for the sack. pic.twitter.com/ifTG94ldoV

It was some bad football for about a quarter and a half as the Jaguars built a 6-3 lead. Wentz’s interception came on the Eagles’ second possession as Jalen Ramsey stepped in front of Josh Perkins in the end zone. Wentz threw the ball into double coverage and had a wide open Smallwood streaking down the left sideline and simply didn’t see him.

Wentz forced it into double coverage in the end zone and was picked off by Jalen Ramsey. Smallwood was open down the left sideline. pic.twitter.com/8P7kARAcEx

The Eagles were able to score a crucial touchdown with 38 ticks to go before the half to generate momentum heading into the locker room. Wentz scrambled for a 13-yard gain on a 3rd-and-11.

Carson Wentz scrambles up the middle for 13 yards on 3rd-and-11 pic.twitter.com/2j6M6u1OEU

Wentz finished off the TD drive by firing a 32-yard strike to Dallas Goedert.

The Eagles’ TD trek in the third went for 95 yards in nine plays. Jason Kelce paved the way for Smallwood on his 36-yard touchdown, giving the Birds a 17-6 cushion.

Jason Kelce clears the way for Wendell Smallwood on the 36-yard TD to cap a 9-play, 95-yard drive. pic.twitter.com/A2Bb7rYkws

The Eagles have a crucial Week 10 showdown against Dallas waiting for them after the bye at Lincoln Financial Field.