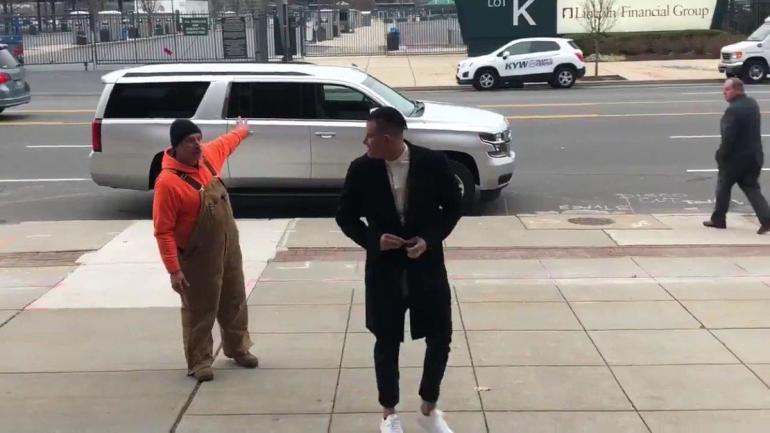 Bryce Harper and Manny Machado were the two crown jewels of this MLB offseason and after several months of speculation and whirlwind drama, one of the two has finally made a decision.

ESPN MLB insider Jeff Passan is reporting that Machado will sign with the San Diego Padres.

MLB.com’s Mark Feinsand stated that Machado will receive a 10-year, $300 million contract, which will temporarily be the biggest free-agent contract in the history of American sports until Harper signs his mammoth pact.

BREAKING: Manny Machado has agreed to terms on a deal with the Padres. According to a league source, it’s for 10 years and $300 million – the biggest free-agent contract in the history of American sports.

Yahoo! Sports MLB writer Tim Brown said that Machado will be able to opt out of the deal after the fifth year.

Opt out in Machado deal is after the fifth year.

Many thought Harper would be the first domino to fall, but Machado beat him to the finish line. I’d expect an imminent Harper contract, especially with all the recent smoke the last few days regarding Harper to the Phillies rumors.

USA Today baseball columnist Bob Nightengale reported Sunday that Harper had finally found the team that met his price and that team is the Phillies.

Bryce Harper, who has been waiting for someone to meet his price, appears to have found that team in the #Phillies. There is no deal yet but he will ultimately receive more than the 10-year, $300 million contract he turned down from the #Nats in September.

The news came on the heels of Jim Bowden’s report Saturday when he stated that the Phillies remained the favorites for Harper and that the 26-year-old “could be rounding third and heading to home shortly” regarding a contract with the club.

"I keep hearing there's a lot of momentum and traction here on [Bryce Harper] going and signing with the Philadelphia Phillies.

He could be rounding third and heading home shortly."

“If I had to pick a favorite for Bryce Harper, at this particular minute, I probably would stay with the Philadelphia Phillies.”@JimBowdenGM believes the Phillies – not the San Francisco Giants – are in the best position to sign Harper. pic.twitter.com/6ELUMFuntp

The pressure is now squarely on John Middleton and Matt Klentak to get the Harper deal done.