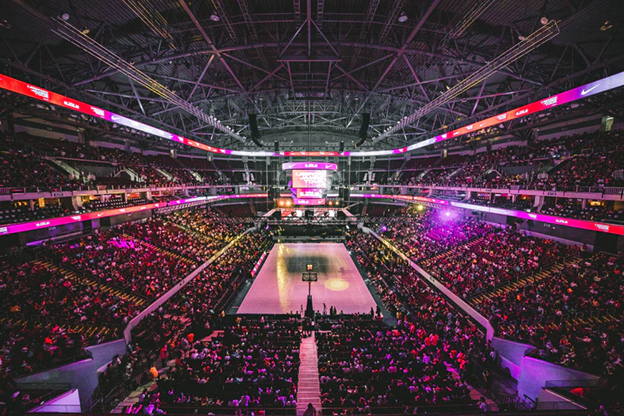 Out in the Eastern Conference the race for the NBA Playoffs is seriously heating up. With around 10 games left to play, the Brooklyn Nets, Philadelphia 76ers and Milwaukee Bucks look set to make up the top three, though it is not yet certain who will take the number one spot. Things are likely to be clearer after Sunday 2 May when the Nets take on the Bucks in a mouthwatering fixture.

Further down the Conference, the remaining Playoff spots are even harder to predict. While the New York Knicks and Atlanta Hawks will be confident of securing fourth and fifth spot, there are several teams fighting for sixth – a position that would exclude them from the new Play-In Tournament.

The Boston Celtics and Miami Heat, are currently placed sixth and seventh respectively face off on Sunday 9 May, in what could be a Playoff decider. The Charlotte Hornets, currently sitting eighth, also have to play the pair before the end of the season.

All of this points to the climax of the Eastern Conference being one of the most dramatic in years. Here is everything you need to know about the Playoff situation out East.

After several years of underachievement the Nets are many people’s favorites to reach the NBA Finals this time out. Going into the final month of the regular season, Steve Nash’s team are top of the pile out East.

Key to their success has been their immensely talented roster, which they have added to throughout the year through a series of smart trades. First to arrive was scoring machine James Harden, who linked up with former Oklahoma City Thunder teammate Kevin Durant and All-Star point guard Kyrie Irving.

Former superstar Blake Griffin also arrived after the Nets bought out his Detroit Pistons contract. They did the same for LaMarcus Aldridge, only for the big man to retire due to his health a month later.

If the Nets are to maintain their top seed, their two games against the Bucks in May will be crucial. Things do not get easier after that either, with tough games against the Dallas Mavericks and Denver Nuggets coming next. Barring any further injury problems, the return of Kevin Durant should be enough to see the Nets over the line.

It will require a monumental effort for the Bucks to steal top spot away from Brooklyn before the end of the season. That’s not to say that Giannis Antetokounmpo and co won’t manage, though.

Although Antetokounmpo will likely surrender the MVP award this season, overall his team seems better placed to deal with the Playoffs this time around. Flirtations with zonal defense have made the Bucks more versatile and less dogmatic. This has often been their downfall in the later Playoff rounds in the past with teams working them out.

As mentioned above, the Bucks’ back-to-back home games against the Nets will be vital in determining the Playoff picture out East. Before the postseason begins, Milwaukee also has games against the Hornets, Heat and Pacers to deal with. If you are thinking of placing a sports bet on these matches, the Bucks should win without too many problems.

The 76ers were in good form in the first half of April and topped the NBA Power Rankings in Week 18. The most impressive of those wins was a six-point win over the Nets.

However, their championship credentials were dealt a blow towards the end of the month with the Bucks securing back-to-back victories over Doc Rivers’ team. These damaging defeats are most likely a blip and the 76ers need to prove this by finishing the season strong.

The Knicks and Hawks currently sit fourth and fifth in the East, some way off the top three by also having a comfortable gap on the chasing pack. The pair therefore look destined to meet in the first round of the Playoffs.

The Knicks’ OT win over the Hawks last Thursday seems to put them in pole position to earn home court advantage. Then again, they have to play the high-flying Suns twice before the season’s end, and also face tough games against the Celtics and Hornets.

Meanwhile, the Hawks’ run-in looks slightly easier, once they get two road games against the 76ers out of the way, of course.

Those hoping to sneak into the postseason via the Play-In route include the Indiana Pacers, Washington Wizards and Chicago Bulls. All of these teams currently have a less than 0.500 win record, meaning those above them will be confident of securing passage to the Playoffs. Stranger things have happened, though.