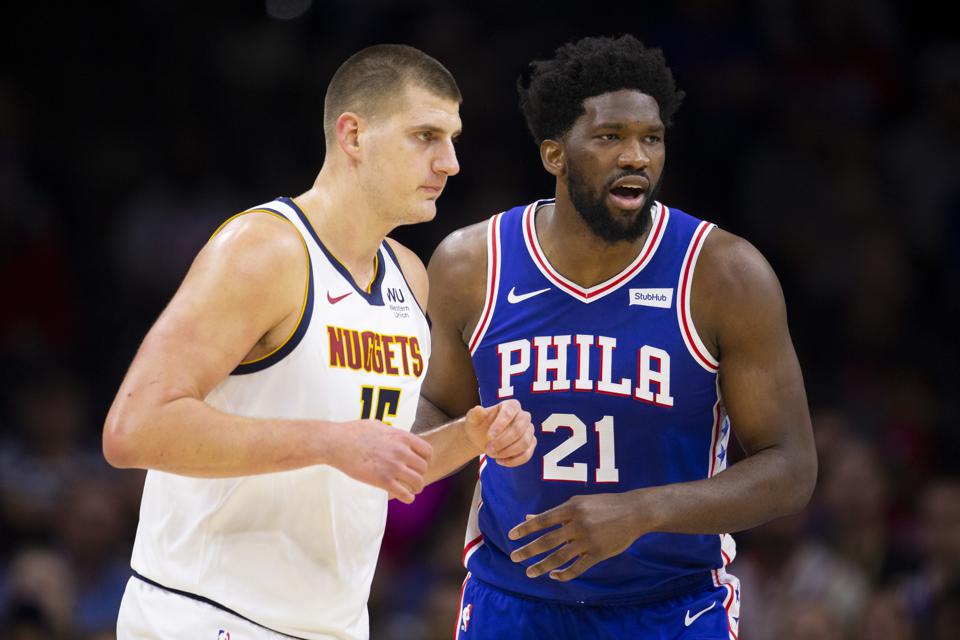 On Tuesday night, the NBA announced that Denver Nuggets center, Nikola Jokić, won the 2020-21 NBA’s Most Valuable Player Award. He is the first Nuggets player in franchise history to be named league MVP.

By winning this award, Jokić becomes the third European player to win MVP (Dirk Nowitzki, Giannis Antetokuonmpo), and also solidifies his place as the lowest-drafted player to win the award; Jokić was drafted 41st overall in the 2014 NBA Draft. He’s been clearly in the driver’s seat to win the award this season. He missed zero games, averaged an impressive career-high in points and rebounds with 26.4 and 10.9, respectively, and a career-high 8.4 assists and 1.32 steals in 34.8 minutes per game. The fact that Jokić didn’t miss a game this season, and almost averaged a triple-double, is definitely not something to scoff at. Surely, that’s the main reason he won the award.

But should he have? Was Joel Embiid robbed?

Let’s take a look at the MVP voting chart:

With the first Kia NBA MVP Award of his career, Nikola Jokić becomes the first player to earn the honor as a member of the @nuggets. He received 91 of the 101 first-place votes.

This might be one of the most disrespectful voting displays for MVP that we’ve ever seen. While technically finishing in second place, Embiid only ended up with one first place vote. Steph Curry (5) and Chris Paul (2) each had more first place votes. And for the most ridiculous observation – Embiid had as many first place votes as… Derrick Rose.

If it wasn’t already clear, this truly is Philly vs. everybody.

There’s no doubt that Embiid has had his share of injuries, which have certainly cut into his availability, but that doesn’t mean it should take away from just how valuable and dominant he is on the court. The Sixers entered Tuesday night down 1-0 to the Atlanta Hawks in what almost felt like a must-win game. Dropping the first two games of a series doesn’t bode well for the chance to move on, let alone being the No. 1 seed and having those games on home court that’s been dominated by the home team. The Sixers lost Game 1 mainly because of one horrid half of basketball. Despite the loss, Embiid still managed to put up a playoff career-high [which lasted all of two days] of 39 points while doing so on a torn lateral meniscus. You’d be hard-pressed to find something more impressive.

Well, maybe this guy could have an argument:

The most dad response you could ask for about Embiid’s injury news: pic.twitter.com/fDr7S1UeqZ

Embiid showed up and, once again, took control.

It is rare that you can get through a Sixers game mentally unscathed, and Game 2 was certainly no exception. After the Sixers’ hot start, the two-point lead at the half seemed like a huge win for Atlanta. It was looking downright ominous after Embiid was relegated to the bench with four fouls.

With the whole Delaware Valley holding their collective breath and trying to fight off the “Here we go again!” mentality, something happened. Something magical.

The Process™ had our backs.

JoJo absolutely dominated the second half, finishing up with a new playoff career high in points with 40 (game-high), helping the Sixers to a 118-102 victory in Game 2. So… 79 points in two games… on a torn meniscus. That alone is MVP-worthy.

The most important takeaway is that we all know who the real MVP is. The eye test can be extremely simple. Anyone who’s watched every game Embiid has played this year knows how dominant he is and just how valuable he is to this team. It’s MVP [Most Valuable Player] not MAP [Most Available Player]

The NBA may not recognize it… but we sure as hell do.