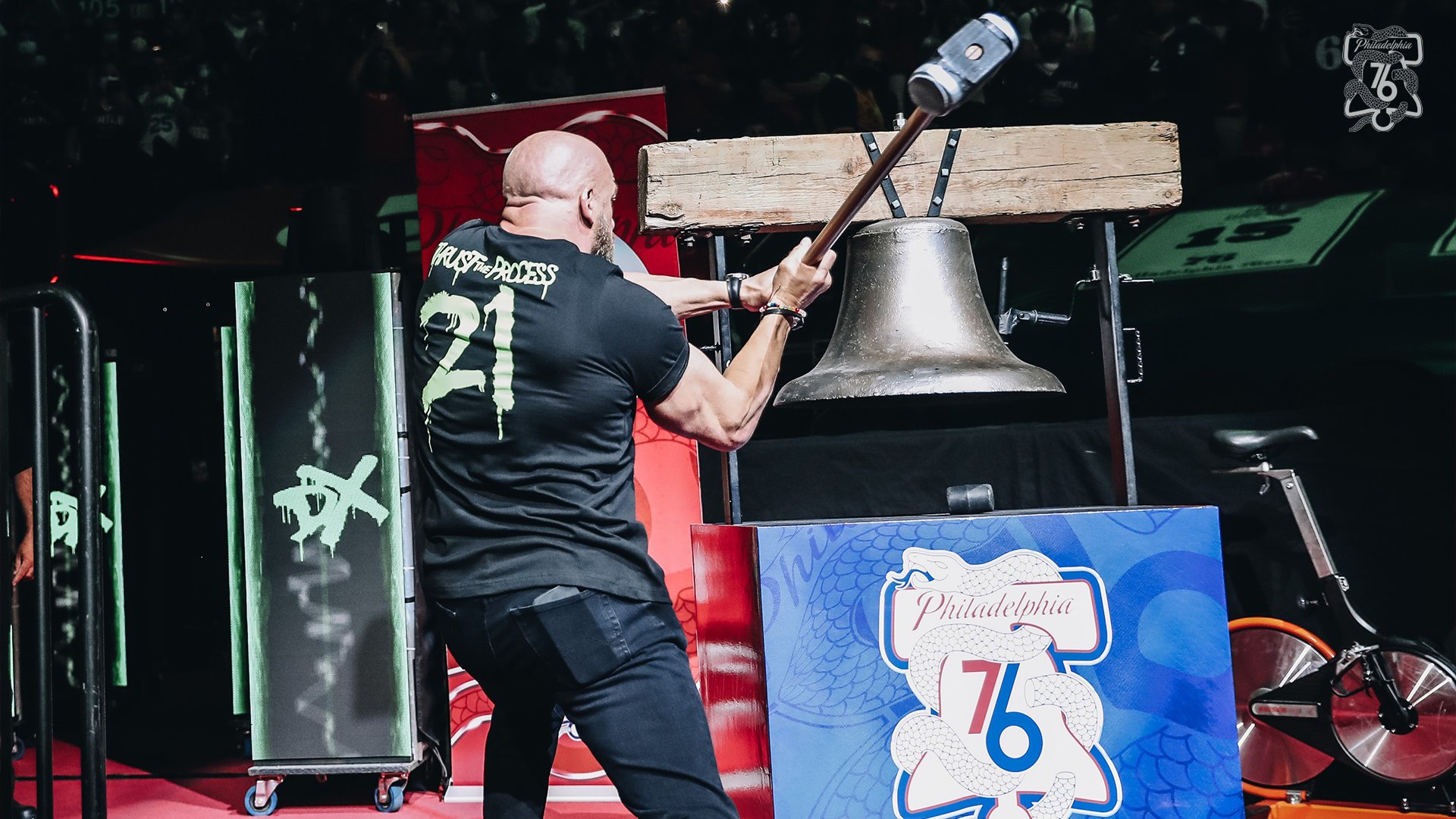 We’re back with an all new Brew. The Sixers vs Hawks in round 2 kicked off on Sunday with the Hawks getting the W. On the bright side though, Joel Embiid returned from missing one game due to a meniscus tear. There was an awesome bell ringer at the game. The WWE had another set of releases last week, with a couple surprise names on the list. All this and more, so let’s get to it – it’s Brew time.

Sixers vs. Hawks … let’s get it on

Sixers-Hawks in the Eastern semis.

This will be good 🍿 pic.twitter.com/aBmADDfbNd

“The Hawks are beating the Philadelphia 76ers… Trae Young is a superstar. He lives for this.” – @AdamSchein on Hawks-76ers pic.twitter.com/gWK1yeeVgE

How can you not love this?

this is the absolute peak for any Attitude Era/NBA fans out there. haven’t been this hype since Rodman walked out with the NWO. pic.twitter.com/2O2iVF9tWW

Trae Young is a problem

Trae Young WENT OFF to steal Game 1 on the road vs. the Sixers 😤 pic.twitter.com/bweElsU05A

The good, the bad, the ugly from Sunday

The #Sixers got down big early and fell short of pulling off an epic comeback, despite 39 points from Joel Embiid. Here’s the good, bad and ugly from Game 1:https://t.co/Ev75XB45JY @KyleNeubeck

#Sixers woke up a little too late in this one. Not panic time for them. If they play like they did in the second half moving forward, they win the series.

Brooklyn and Milwaukee should be a war

The Nets came out victorious in the opener

The Nets take Game 1 over the Bucks 🙌

KD led the way for Brooklyn with 29 points. pic.twitter.com/EqLu3qEjzc

Not good news for the Nets

James Harden is OUT for Game 2 of Nets-Bucks due to right hamstring tightness.

The defending NBA Champions have been eliminated

The Suns were too much for the Lakers

LeBron and the Lakers couldn’t outrun the Suns. ☀️ pic.twitter.com/Ad5qGqT3bh

We should’ve seen it coming

#LeBronJames leaves the court early as his #Lakers get their asses handed to them…. #NBAPlayoffs pic.twitter.com/kTco4WFRi1

A quick exit for Lakers’ LeBron James after Game 6 loss. No handshakes on the court w/ the Suns pic.twitter.com/hv7S60KHRk

Magic Johnson weighs in on the Lakers’ debacle

Magic Johnson after the Lakers fell to the Suns 4-2 in the first round. pic.twitter.com/9LV7Dh01HN

The crossover. The step over. The Answer.

This doesn’t even happen to the Marlins or Pirates pic.twitter.com/FMiLAEmIHv

lmao the catcher ran out to second base and tagged him pic.twitter.com/qKtA8ytZPe

Serious question… WTF was he looking at?
Why did he do this. So strange https://t.co/V08gVViUch

The WWE had another round of releases

WWE has come to terms on the releases of Braun Strowman, Aleister Black, Lana, Murphy, Ruby Riott and Santana Garrett.

WWE wishes them the best in all of their future endeavors. https://t.co/8bAQIFgA1M pic.twitter.com/b77AeeLuDn

New details on Braun Strowman’s WWE release, which was chalked up to “budget cuts”. https://t.co/z5fRqdzUNm

SummerSlam is heading to Vegas

BREAKING NEWS: @SummerSlam will take place from @AllegiantStadm in Las Vegas on Saturday, August 21 at 8 p.m. ET/5 p.m. PT, marking the first time the annual event has been held at an @NFL stadium! https://t.co/oqSsBKtSMV pic.twitter.com/ZyNSKDkG3a

Chyna documentary is on it’s way

.@AndradeElIdolo is All Elite. Hear What He Had to Say! | AEW Friday Night #AEWDynamite 06/04/21 https://t.co/chlfvFYNy3 via @YouTube pic.twitter.com/bhOqDJ9Tzh

Obama knows that Republicans are trying to rig the game

Rep. Nearman is a traitor

Times are rough for Rudy Giuliani

Rudy Giuliani is doing My Pillow ads during his hour-long YouTube video on UFOs. pic.twitter.com/7eIEYFpPYx

Don the Con takes another L

The National Enquirer came to Don the Con’s rescue

The publisher of the National Enquirer has agreed to pay $187,500 as part of a settlement with the Federal Election Commission over the 2016 scheme to buy and suppress the story of ex-Playboy model Karen McDougal, who alleged an affair with Donald Trump. https://t.co/SXuK50HYUH

Don the Con is desperate to avoid jail

Trump pitched on running for House in effort to become Speaker: “So interesting” https://t.co/qaHfqs5qkD pic.twitter.com/LL8Yx3pbNq

The man is nuts

“Mr. Trump, who White House officials said watched with pleasure as his supporters stormed the Capitol and disrupted the Jan. 6 certification of the Electoral College vote, has [told ppl] he believes he could be ‘reinstated’ to the White House this August” https://t.co/uyI7i3NEiQ

“If Trump truly believes he’ll be back in the White House this August, he should get help… Same goes for the GOP.” — Jim @Acosta #MarALagoVille pic.twitter.com/o0jSNaihXl

George P. Bush is a sellout

.@MaddowBlog: George P. Bush knows that Trump has gone after his father, uncle, and mother, but he’s putting all of that aside to advance his personal ambitions. https://t.co/4WEGdDtK8P

This can’t be good

More than 150 small earthquakes have been recorded Saturday in a rural area near the Salton Sea in Southern California, with the largest having a magnitude of 5.3, a US Geological Survey seismologist said.https://t.co/FAfc0zaAav

From Made In America to Wawa’s Welcome to America, festivals are taking over Philly this summer (@CandisRMcLean) https://t.co/ndqEASvZQB

A mural of George Floyd commissioned by the North 5th Street Revitalization Project was vandalized with a white supremacist hate group logo https://t.co/43rgsc6sEy

2/ part 2…
Anonymous may do more in revealing truth and lies… than all us critics have tried pic.twitter.com/cwtOEfk4MI

Why was this even happening?

The NFL says it will halt the use of “race-norming” — which assumed Black players started out with lower cognitive functioning — in a $1 billion settlement of brain injury claims. The practice had made it harder for Black players to qualify.https://t.co/OQpzSD88xM

Coach K will retire after the upcoming season

Coach K will reportedly retire after this upcoming season 🚨 (per @GoodmanHoops)

The Pub usually likes to keep things fun and light, but sometimes sports can be dangerous.

Last night #Rays prospect Tyler Zombro was hit in the head a game between Durham and Norfolk. Latest is that he is in stable condition. #Prayers pic.twitter.com/Aami4PD6NK

These are some badass jerseys

we have a crush on these jerseys pic.twitter.com/7davfsmF8O

Surreal TV moment as six-stroke leader Jon Rahm learns he tested positive for COVID and Jim Nantz tries to make sense of it without knowing what Rahm’s been told pic.twitter.com/WvD6LmAlxs