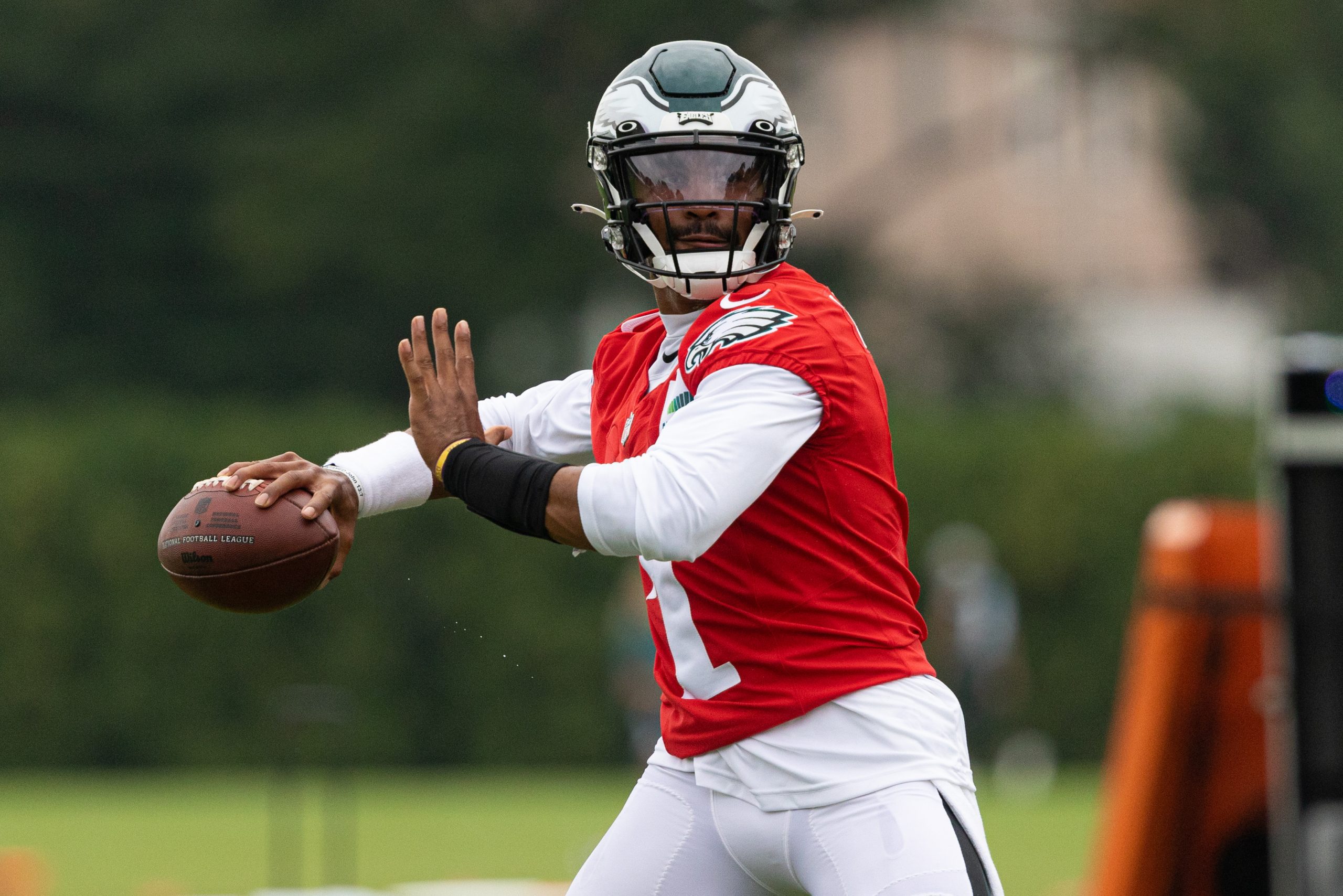 Jalen Hurts doesn’t have to worry about Carson Wentz’s feelings in Philadelphia anymore. Now he just has to focus on himself and being the best version of that for the Eagles, who transition into life with a new head coach at the helm.

Nick Sirianni replaced Doug Pederson this off-season and will look to lead the Eagles upward in his first season in charge. The former Indianapolis Colts offensive coordinator takes over an Eagles squad, which is trying to bounce back from a horrendous 2020 season, which saw them only muster four wins and miss the playoffs entirely.

With Wentz gone, Hurts takes over as the new promising figure in the Eagles locker room, trying to build off some impressive moments in 2020 as a starting quarterback. Hurts only has one week of training camp under his belt with Sirianni, but the 40-year-old head coach is already seeing improvement in his decision-making and abilities.

While Hurts has been known to run with the ball, the goal for him will be to be more poised in the pocket and deliver some top-notch throws for the Eagles this season. The former Alabama and Oklahoma product finished his rookie season with 1,061 passing yards and six touchdowns to four interceptions. He only completed 52% of his passes, but still didn’t have many offensive weapons to work with in 2020 due to a slew of reasons.

Hurts’ versatility in the pocket is an added boost to the Eagles offense though, especially in extending offensive plays and trying to avoid negative plays in general (sacks, etc). The 22-year-old has been working with his receivers throughout the summer including 2021 first round pick DeVonta Smith, who is poised to bring plenty of energy to the Eagles offense.

Sirianni has tried to notice any small changes that Hurts may need to fix in order to be successful in the NFL, but overall is trying to let his quarterback figure it out through repetition. 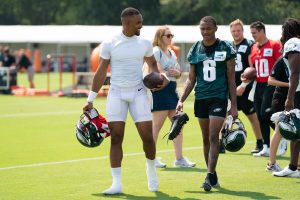 “I don’t mess with too much of that. Just about the finish, really, up at the top but everything we do fundamentally is going to be with his feet and also ball security and keeping two hands out of pocket and when he is about to move,” Sirianni said. “That is something we have to continue to work on because he has a tendency as he moves to keep one hand on the ball. We’ve just got to get the two hands on the football as he moves in the pocket. So, fundamentals at every position is critical. His is no different and we have a great coach in [Quarterbacks Coach] Brian Johnson. That’s one of the main reasons he’s here, is because he’s great with fundamentals of quarterback play.”

Hurts will likely head into the new 17-game regular season as the Eagles starting QB, but will have two veterans behind him looking to jump into the mix. Former Super Bowl winner Joe Flacco and veteran Nick Mullens were signed as free agents in the summer to provide depth and experience for Hurts to lean on. Both Flacco and Mullens won’t be expected to play much outside of preseason, but provides competition for Hurts to build from and shoulders for the second-year pro to lean on for guidance. 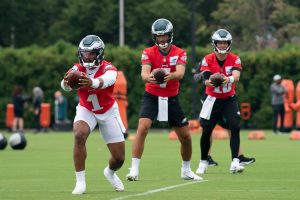 “Quarterback rooms, that is one of the best places in that building,” Sirianni said. “To be able to sit in a
quarterback room, I sit in the quarterback room every day. Every meeting, I’m in there, [Offensive
Coordinator] Shane [Steichen] is in there, Brian’s in there and then obviously Nick, Joe and Jalen.
We just talk through so many things, right? We talk through just why we’re calling a play and what we
want it against and what it might not be good against.

“And there’s just these conversations that go and Joe has all this experience, Nick has experience, Jalen has experience and just, ‘Hey, what is your favorite time you’ve ever hit this?’ I just seeing in them connecting on being in that room together, and really, really happy with that. Like I said a couple days ago, really happy with that room,” Sirianni said. “I think a lot of teams in this league would be ecstatic to have the three players that we have.”

For now Hurts will continue to go through training camp as the Eagles try to gel together under their new head coach. It might take more time than Eagles fans would like, but overall the long-term aspirations and goals remain exciting for Hurts and his offensive teammates.