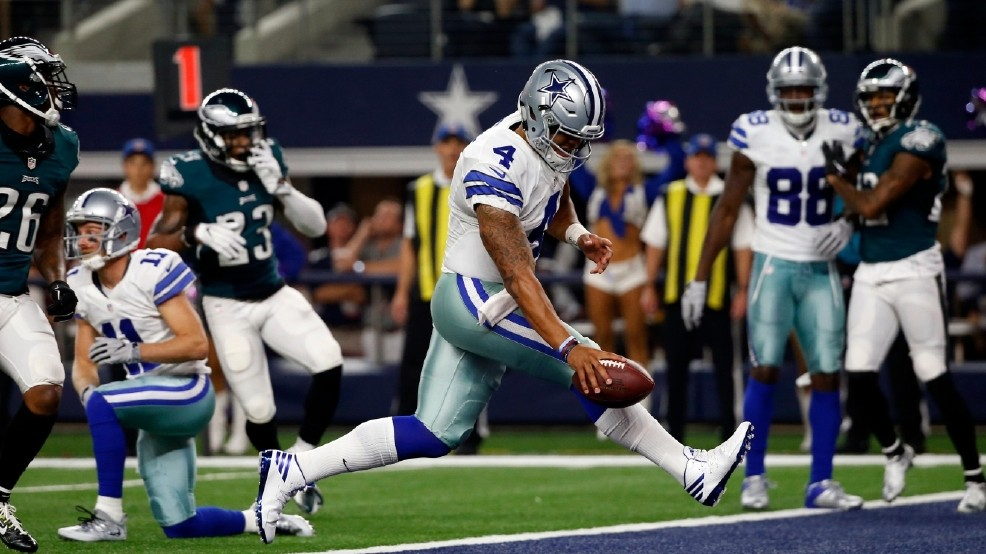 The Eagles’ offense looked pretty bad against the 49ers Sunday, but the big story this Monday night will be how the defense fares against a high-powered Dallas Cowboys offense. The defense has stepped up in the first two games, but with a huge season-ending injury to Brandon Graham, will that motivate the defense or exploit its flaws?

The Birds’ first divisional match-up is a national television affair on ESPN’s Monday Night Football, and it’s another huge test for this team. Can Jalen Hurts and Nick Sirianni bounce back from a very poor performance last Sunday? Here’s what our staff thinks!

I see this game fleshing out the same way the 49ers game did. It will be tight for a few quarters because both teams have significant injuries that affect the way they play. When it comes to the Cowboys, they’ll have to find a way to generate a pass-rush without Demarcus Lawrence (Parsons isn’t the answer). And for the Eagles, the loss of Brandon Graham as a pass-rusher and an edge setter against the run is huge. I ultimately think the Cowboys will win because they’re more talented than the Eagles, have better quarterback play, and have been consistent in both games so far this season.

Eagles. Cowboys. Monday Night Football. The game we’re all looking forward to. And we get to see the Mannings, Peyton and Eli, break down every play.

I must admit, I’ve been pretty bad with my predictions so far. I’ve anticipated some higher-scoring games, and so far we’ve seen both Eagles games go well under the set total. So you know what that means… I’ll be looking forward to a bunch of points being scored for this one.

There are a few best bets and props I like for this one, but my safest is (game to be tied after 0-0) at -145. I think this is a relatively close affair early on and expect some back-and-forth scoring going on in this one. Unfortunately, I don’t see the Eagles being able to keep pace with the dynamic Cowboys offense. Looking at a final score of around 31-26.

I’m really nervous for this game. We’ve seen two versions of the Eagles’ offense so far this season, and in order for this team to be successful, we need the Week 1 version to be true. I’ve sadly been impressed by this Dallas team so far, and think it could be a tough night for the Birds.

The Philadelphia Eagles will play tough on the road in Dallas on Monday night, but will find it tough to slow down Dak Prescott and the Cowboys offense. Prescott and his slew of offensive weapons will be itching to get after the Eagles defense as the team’s biggest test yet. Jalen Hurts and his offensive teammates will need to outperform Prescott and Co. on the road, and unfortunately I don’t see that happening in the end.

Cowboys 27 Eagles 17.
Best Bet: UNDER 52 Total Pts (-110). While I expect a lot of yards in this matchup, I do like the Under at AT&T Stadium. Both teams will look for consistent ball security and I think the Eagles will struggle late in the game to stay level with Dallas. While my roots stay with Philly, I think this will be a frustrating defensive day for Jonathan Gannon and his players.

There is a clear path to victory for the Eagles, and I’m comfortable Nick Siranni will commit to it. The Dallas defense ranks 27th and 28th in rushing success rate allowed and overall yards per play. Oh, and Dan Quinn calls the plays. Philly enters Monday night ranked second in yards per rush behind only Baltimore, so expect a heavy dose of the ground game. The Eagles’ offense will run the ball very effectively, keep the clock running and the chains moving while Dallas’ high-powered offense sits on the sidelines. The only way Dallas has stopped anyone on defense is by creating turnovers, but they are now facing an Eagles team that has been perfect in protecting the football. Dallas had both of its first two games decided by a field goal or less, and this is the perfect recipe for Siranni to keep this game within the number. The points are too juicy to pass up, but don’t be surprised if the Eagles win outright.

﻿Well, it was fun while it lasted. The Eagles came back to reality against the 49ers last Sunday. This week is a big test for the Birds. Besides the fact that we get to see how they bounce back from a loss and an injury to arguably their heart and soul on defense; Brandon Graham – but, it’s also Dallas Week and it just so happens to be on Monday Night Football.

I’m not going to lie. This match-up worries me. The Cowboys have a high powered offense that I don’t think the Birds will be able to contain. I see Dak Prescott and CeeDee Lamb causing chaos for the Birds D. I do think that the Birds offense will play better, as long as Sirianni calls a better game. The Eagles can put up some points this week too, but as much as it pains me to say it, I think the Cowboys take home the W. One thing to never forget though is that win or lose, it was, is and forever will be “F*ck Dallas!”

Picking Eagles games hasn’t been my strength to start the season as I am 0-2 SU. The good news, I’m going to take the Cowboys this week. Now, how can the Eagles win this game? Hurts puts the offense on his back and plays loose, is accurate, and makes plays! When the deep ball is there, take it and connect. He missed out on two deep plays against the 49ers, but I think he’ll not be afraid to continue throwing deep. The defense must force a turnover, which would be the first one on the year. Dallas is favored by 4, but I think this might be a 7+ point winner by the ‘Boys.

I said last week I have to see enough for me to get over these “doomsday” thoughts for the Eagles every week. I didn’t see much to sway my opinion last week, but the defense has improved a lot since last season. They still need to get turnovers, which seems like pulling teeth with this defense the last decade-plus, with the exception of 2017. I think we can say “with the exception of 2017” for a lot of this team’s issues – WHEN WILL THEY BE FIXED?

The defense has to stop the Cowboys’ offense, and I’m just not sure they have enough to do so. As bad as Dallas’ defense can be, the offense will need to be near perfect to walk away from this NFC East showdown with a victory. I just don’t think they will.