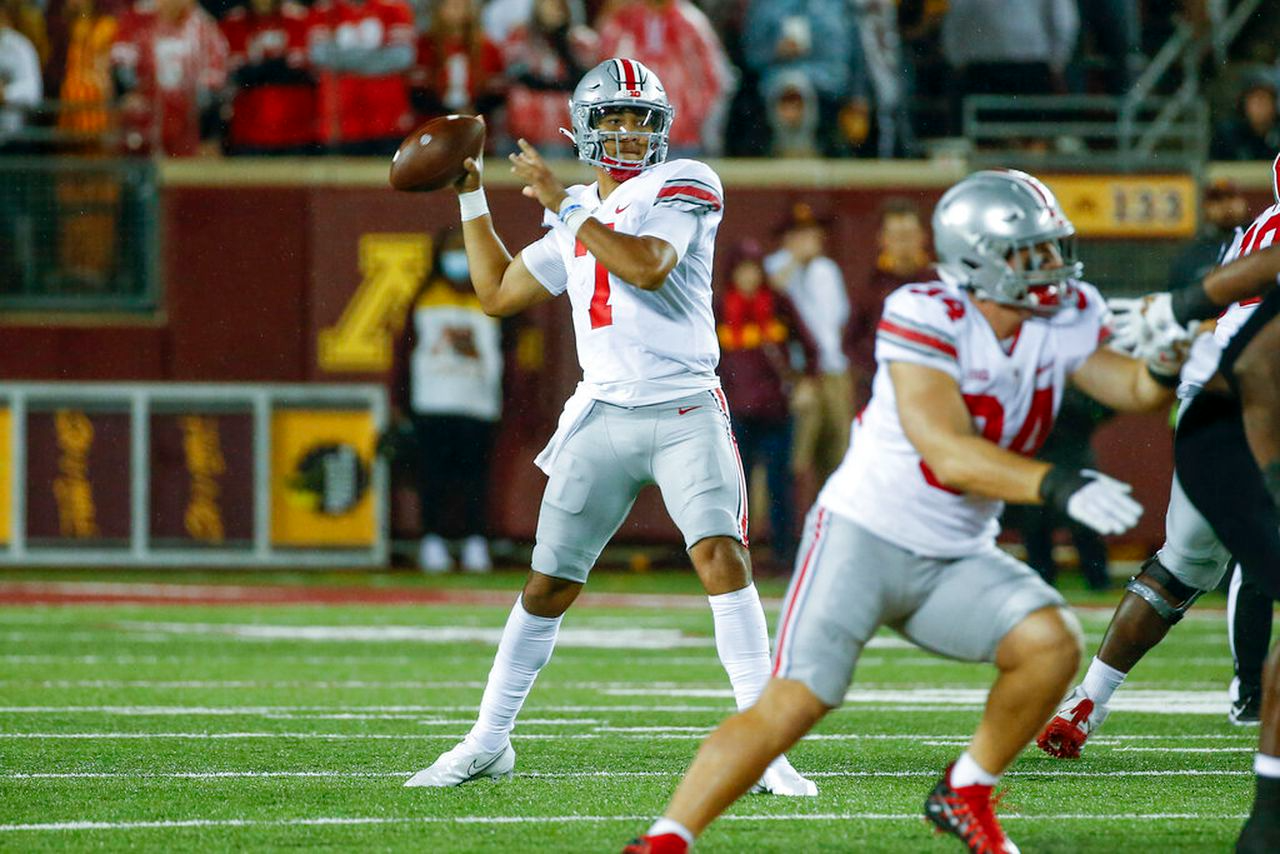 I know, I’ve been gone for a bit.  With weddings, family events, and other debauchery going on in August, I ended up taking a break from sports picks. But it’s almost fitting, as it has acted as a calm before the storm. FOOTBALL IS BACK!

The NFL kicks off Thursday night, and Week 1 is here ready for us. We also are in the full swing of college football with plenty of great match-ups coming our way.

Let’s get to the real reason you are all here, it’s time for this week’s picks!

Here we have two teams that in my opinion that underperformed in Week 1. Oregon was obvious, going up against a Fresno State team they were nearly 20-point favorites against at home, and they escaped with a late win by a touchdown.

On the other side, Ohio State pushed ATS, winning by 14 points against Minnesota on the road. That being said, the fact the Buckeyes were trailing in the third quarter of that game, and only up by seven late in the fourth quarter didn’t give me a ton of confidence in them. Partially because by most counts, Minnesota isn’t supposed to be a very good Big 10 team this season.

So now we come to Saturday, in the premier game of the noon kickoff slate, and I see one side with an easier story to explain underperformance than the other. Oregon’s story is easy, they were looking past Fresno and already focused on the Buckeyes. That same storyline doesn’t really work in terms of Ohio State. OSU should only be looking past teams for games against rivals (like Michigan) or other top programs (like Alabama). That Week 1 performance gives me more of a hunch that there could be problems in Columbus, and maybe they aren’t a surefire playoff contender [hot take alert!?]

Yes, it’s a fast read after one game, but I don’t think we can forget those logical storylines. Oregon is a better team on paper than Minnesota by a solid margin, and I’m getting even more points with the Ducks at 14.5 as we head into Sunday.

It’s a very strange feeling, but Rutgers is favored on the road against a team not named “Little Sisters of the Poor,” and yet I’m not sprinting to be the other side. Rutgers is in their second year under Greg Schiano (in his second stint at RU), and they started off the season boatracing the Temple Owls, 61-14.

The key to Rutgers dominating was really in the turnover battle, where they had a clean sheet on offense and let the Owls give them the ball back five times. Rutgers defense was extremely impressive in Week 1, and the offense did what they needed to do, but honestly has a lot more potential with so many returning starters (which is tough to fathom when they already put up 61 points).

Syracuse did what they needed to do in their Week 1 match-up, beating Ohio 29-9. But across the board, they are projected to be one of the worst teams in the ACC (lower than the ranks of teams like Wake Forest).

Is Rutgers going to be a force in the Big 10 this season, almost certainly not, but the signs of the turnaround are starting to show. Games like this are key for the Scarlet Knights if they want to get to Bowl season, and Schiano knows that. I expect Rutgers to keep rolling in non-conference play here, before the tougher opponents show up in the coming weeks.

I’m not going and try to oversell you on this play, cause I am truly only basing it on one (and a half) stats. Yes, Alabama is the best team in college football, and, yes, they are going to absolutely destroy Mercer. But, the Crimson Tide are currently 56.5-point favorites in this match-up, and history says these big point spreads are checks written which Saban and company can’t cash.

All since 2011, Alabama has been 50-point favorites only seven times, and they are 1-6 ATS in those match-ups. Lowering the bar a little bit and looking at when Bama is a 40-point favorite, in their last seven times out, they are 2-5 ATS in that scenario.

I have nothing else besides these two bits of information. I know what Alabama did to Miami last week, and I know nothing about Mercer, but these two stats are pretty solid trends that I’m comfortable backing.

When it looks like a duck and it walks like a duck, it is usually a duck. The Texans are expected to be one of the worst teams in the NFL this season (favorites at +250 to have the least wins this season), and that is for very good reason. I’m not going into the Deshaun Watson mess, but we know he is not playing already, and the team is just lacking talent across the board overall. The Notorious B.O.B. (former head coach/GM Bill O’Brien) absolutely destroyed this franchise and this season will be the low point in a long rebuild.

On the other side, the Jags brought in Urban Meyer and No. 1 pick Trevor Lawrence. I’m not here to tell you the Jags are going to be a good team, but just overall talent wise they are on paper leaps and bounds beyond Houston. Back to how bad the Texans are for one moment… Jacksonville is the first team to be favored in Week 1 after going 1-15 or worse in the prior season since the 2001 San Diego Chargers. It’s been 20 years!

Lastly, if the high level on paper view didn’t convince you, over the last two seasons, QBs making their first career start are 18-6 ATS.

Oh… you needed one more stat? Jacksonville has been one of the best Week 1 teams in the last five years, going 4-1 ATS in that time.

Outside of the team you follow (if you fall into this category), is there any head coach’s tenure more interesting to watch than Dan Campbell’s Detroit Lions? It seems like ever other day he is saying bulletin board material lines, and that this is either going to be a surprising success, or one of the biggest implosions in the NFL.

Week 1 they are drawing a tough matchup as 7.5-point home underdogs against the 49ers. I’ll be honest, the spread itself scares me here, because I don’t know whether I can believe Campbell has some sort of method to his madness yet. That leads me to take a look at this total, which is currently one of the lowest ones on the board at 44.5.

The Lions defense is on paper one of the worst in the league heading into this season. The 49ers just named Jimmy Garoppolo their starting QB for Week 1, and he is going to want to take advantage of this weak defense to build up stats and try to keep the job for as long as he can. I also buy into the idea that Campbell is an offensive coach, and that he has some tricks up his sleeve to put up some points in the opener, which makes me like over the 44.5 total number.

That being said, I have more confidence in the 49ers finding the holes in this Lions defense overall, so I’m taking the team total of 49ers over 26.5 points as my official play.

Take over 26.5 points by San Francisco.

And so it begins, Jameis Winston Chapter 2: NOLA Time. Yes, Winston has earned the starting job over Taysom Hill, and will begin the post Drew Brees era in the Big Easy. The tragedy of it all is that the Saints are missing several pieces on offense, and the weapons limitations are going to make it tough to know if Winston is really that bad, or the Saints just need to start the rebuild.

We know Michael Thomas is out of the first half of the year, but beyond that, the Saints also have other injuries at WR and TE, making the only legitimate weapon in the offense Alvin Kamara (who is obviously a great one to have if you only have one.)

The Aaron Rodgers Green Bay finale tour is also beginning in this same game, and I’m buying into him starting it off with a bang. We went through the drama all offseason, but all of the pieces of the Packers are still intact for the most part, and I’m not losing sleep over Rodgers missing mini camp at this point in his Hall of Fame career.

Packers were the better team last year, and surprisingly have less disruption from the offseason heading into Week 1.

The time we have all been waiting for is upon us, and I’m ready for kickoff of every single game. Good luck to all on your plays!