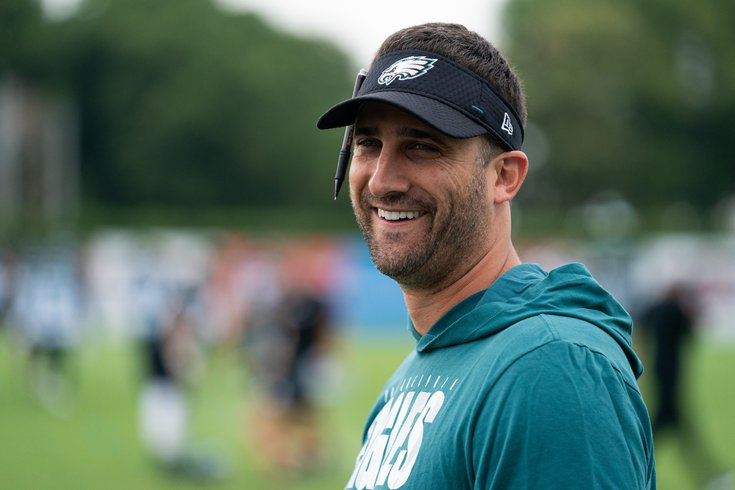 The Philadelphia Eagles will do everything they can to avoid a repeat of the 2020 NFL season. For new head coach Nick Sirianni and his players, it’s easier said than done, but the focus remains high to start off the 2021 campaign on a positive note.

Sirianni makes his head coaching debut on Sunday as the Eagles travel to Mercedes-Benz Stadium for an opening day showdown with the Atlanta Falcons. The Eagles square off with a similar team in Atlanta, who struggled for majority of the 2020 season and will be relying on new faces to lead the way this fall.

Matt Ryan remains the signal-caller for the Falcons, but Julio Jones’ departure to Tennessee now sees Calvin Ridley as the No. 1 option on the offense. First round draft pick tight end Kyle Pitts is also a dynamic weapon for the Falcons offense, after playing both outside and inside at the University of Florida during his collegiate career.

The Eagles will see Jalen Hurts had into the 2021 campaign as the starting quarterback following Carson Wentz’s departure to Indianapolis, while young receivers DeVonta Smith and Jalen Reagor will look to take strides in the offense. Zack Ertz and Dallas Goedert pose one of the top 1-2 threats in the NFL at the tight end position while Miles Sanders will be keen on earning his first 1,000-yard rushing season as a pro tailback.

While the Eagles won’t be expected to finish as division winners in the NFC East, confidence remains high as the new season gets underway.

“I’ve said this to a couple people, that like every day in training camp was this preparation, how did you get better every day,” Sirianni said Wednesday in a press conference. “How do you leave yesterday or how do you leave the day better than you were the day before?”

“And I really believe because of the players that we have on this team that know how to win and play and practice, we did that gradually, and then that sets you up for a position of where now I’m ready for game one,” Sirianni said. “You don’t think about that in training camp, but it’s a very important step that you’re, boom, making those steps along will way, along the way, along the way, along the way to when you get this Monday or this Wednesday, you’re ready to say, ‘Now it’s the preparation of this week to be ready.”

While Hurts and some others showed promising moments during an eventual abysmal campaign, the Eagles struggled to gain any consistency in 2020, something that will need to change if Sirianni wants to stay in Philadelphia long-term. The 42-year-old has experience in the NFL as an offensive coordinator, but will calling the shots for the first time in his career as a head coach, a major step up to his past titles.

An opening day trip to Atlanta isn’t as daunting as in past seasons, which is a positive sign for the Eagles if they want to gain some early season confidence. Tougher tests against Kansas City, Tampa Bay and Las Vegas among others remain on the schedule so a victory against Atlanta, who is also under new leadership, would be a strong first impression on how Sirianni’s team will be judged into the near future.

“But we also know this, too, that there is a lot of unknowns,” Sirianni said. “They have that same type of advantage, if you will, that we have that we don’t know exactly what they’re going to do. That’s what’s great about football. You can have a plan, you can have this beautiful plan, but you better be able to know how to adjust and what you want to adjust based off what they’re doing. So, I feel very confident and ready, but also feel confident and ready we’ll be able to adjust when need be because that’s how we live and how we call football games.”