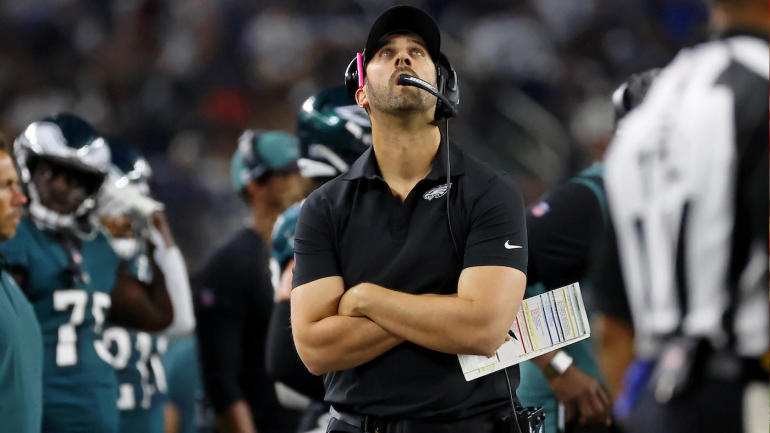 Well, the Eagles showed some fight against Andy Reid’s Kansas City Chiefs at home last week. It’s still too early to tell if this team is just really bad or simply inexperienced. The offense was better, but the Chiefs’ defense isn’t that good. This week will be another big test for the Birds as they visit the Carolina Panthers.

New coaching staffs always take some time getting into their flow, but the 2021 Eagles have been defined by penalties, poor play-calling, and stalling in the red zone. They need to clean that up if they not only want to win games, but to even be competitive. If the Eagles are going to make any noise this season, this might be a must-win game. Looking at their next six after the Panthers, they’ve got a mighty road ahead. The soft spot on the Panthers is their offensive line … so the pass rushers must exploit them! With Lane Johnson out yet again and a hobbled Jordan Mailata, the Panthers’ fast defensive ends could have field day. Ultimately, the Birds lose on the road.

The line is currently CAR -3, and I honestly think that’s too low. I do expect this game to be closer than the Birds’ previous two match-ups against the Cowboys and Chiefs, however, I see Carolina covering the three points and winning a relatively low-scoring affair. I’d look for the Eagles to run the ball more, and I’m simply praying this happens as I have struggled all year with Miles Sanders on my fantasy team.

Are the Panthers for real? I know they looked bad last week against Dallas, but overall, I still think the answer to that question is yes (by real I mean contending for playoff spot). I did like the progress I saw from the Eagles’ offense last week, but the Chiefs’ defense has known holes. This Carolina D is far more intimidating.

The most troubling aspect of Eagles’ loss to KC was the inability to score in the red zone against the NFL’s worst defense. Matt Rhule’s defense gets after the QB and will have the Birds settling for three far too many times. The Carolina offense is no juggernaut, but should be able to get into the mid-20s against a team that allowed 83 points the last two weeks. Until Siranni does more than proclaiming he is “ticked off” about the most penalized team in the league, I can’t pick them to beat a competitive, well-coached Panthers team at home.

The Eagles’ season is slowly but surely heading down the toilet. The Birds have now lost three games in a row as they head down to Carolina to do battle with the Panthers. I’d love to tell you that the Birds were going to snap their losing streak here, but I just don’t see it. I think the Panthers are better than people think. Sam Darnold looks rejuvenated in Carolina, and DJ Moore is having a hell of a start to the season. I’m not convinced the Eagles’ coaching staff can put this team in a position to win this week. I see this being a sloppy, defensive-minded game, with the Panthers pulling out a win with a late field goal.

I’ve gotten two straight predictions correct, and I’m not buying what Nick Sirianni is selling this weekend, either. Whether it’s Siranni trying to figure out what works, or he just hates to run the football, I don’t think they’ll pass all over the Panthers on Sunday. Lane Johnson is a huge loss for another week and the offense will be forced into multiple turnovers.

No shot. Everyone’s big on the Birds this week. I guess it’s because the franchise, regardless of head coach, has tricked everyone into thinking this is the kind of game the team wins despite, overall, not being a very good team. The Panthers win big.