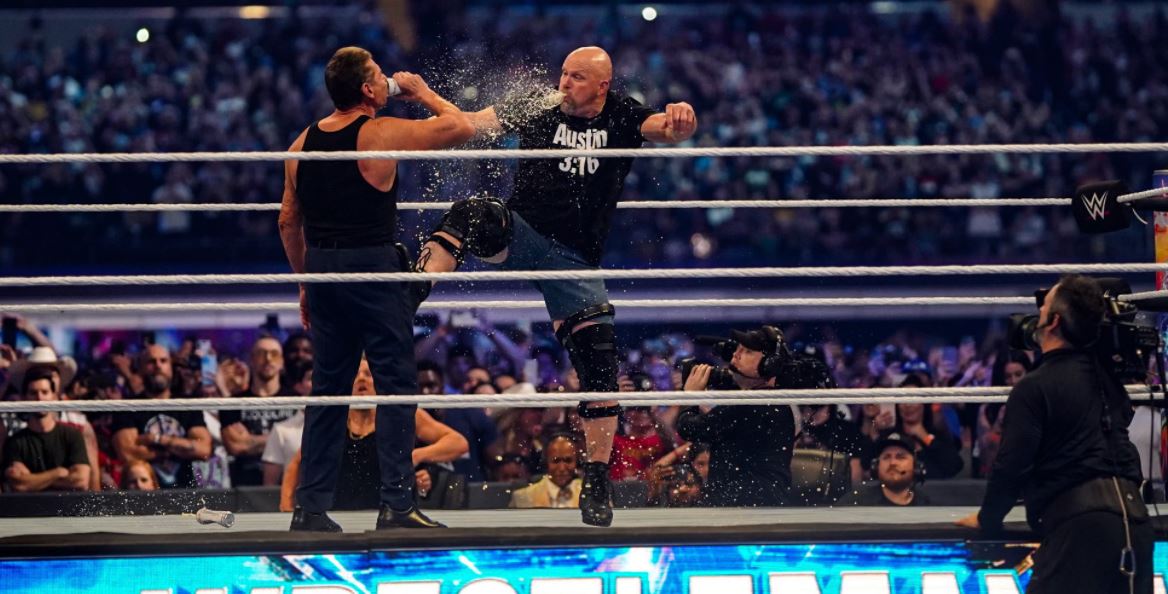 We’re back with a new Brew. Wrestlemania 38 was held in Dallas in a two night extravaganza. Cody Rhodes is back in the WWE. Stone Cold Steve Austin put on one hell of a show. Ben Simmons continues to hustle without working. Villanova fell in the Final Four to Kansas. This Brew is jam packed, so let’s get right to it. It’s Brew time!

Stone Cold gets the W over Kevin Owens on Night 1

it is absolutely unreal that in 2022, Stone Cold Steve Austin hit a stunner on Kevin Owens and pinned him to win the main event of #WrestleMania and watching this with my ma made it even more special pic.twitter.com/7JYjTsXbNZ

The Rattlesnake was victorious

What a pop for Stone Cold!

What a way to end the first night of Wrestlemania

THIS IS AWESOME #WrestleMania pic.twitter.com/lxaNZgZVmX

The sell from Austin Theory

The worst, but the best stunner in history! #StoneCold #VinceMcMahon #WrestleMania pic.twitter.com/zXH5V1wbhA

“Stone Cold” Steve Austin and The Undertaker having a chat before it all kicks off in a few hours!

I can’t believe my eyes

Rhodes gets the win in his return to the WWE

The behind the scenes

Behind the scenes footage of Cody Rhodes’ WWE return at #WrestleMania last night.

I always find these types of videos so intriguing to share. pic.twitter.com/A1asfE5PKO

The legendary ‘Stone Cold’ Steve Austin had his first match in 19 years. Logan Paul debuted. Bianca Belair and Becky Lynch may have had the match of the year.

Night one of #WrestleMania 38 was a movie, @JustinBarrasso writes https://t.co/ovfbrWasWK

Triple H is in da house baby😭 not cryin you are❤️ #WrestleMania pic.twitter.com/EJJyU89u7k

The official end, we’re so glad @TripleH got one final #WrestleMania moment ⚒️

Thanks for everything, Hunter 💚🖤 pic.twitter.com/CGKoVFs1r2

I spent a couple days in Dallas with @TripleH on his first work trip after heart surgery. He’s trying to build a pro wrestling pipeline into the NCAA, now that student-athletes are allowed to make money. https://t.co/k4osFJxu6i

In an average at best match, Roman Reigns unifies the titles

Riddle with the RKO

Riddle is a mad man!!!! Didn’t expect that at all. #RKBro #AndStill #WrestleMania pic.twitter.com/oAIbAGAaVj

It’s been an eventful night at #WrestleMania38. Catch up on ESPN with my live blog! https://t.co/o1BbSVWsvm

Undertaker saying “I love you” to Vince McMahon as he accepts his place in the 2022 #WWEHOF pic.twitter.com/ziFqbSWPBS

The #WrestleMania Roundtable for Nights 1 and 2 are available now at https://t.co/kykAOu71v3!

Nova’s season comes to an end

WE’RE GOING TO THE NATTY 🏆 pic.twitter.com/Tw3r1Wi0bH

Kansas was in control from the start

THE KANSAS JAYHAWKS ARE BACK IN THE NATIONAL CHAMPIONSHIP FOR THE FIRST TIME SINCE 2012 🔥@KUHoops #MFinalFour pic.twitter.com/A2KX2bCZKY

Career over for Collin Gillespie

Hell of a fucking career at Villanova for Collin Gillespie. pic.twitter.com/IJEp1332Oc

That’s a great coach for you

UNC got it done in a thriller

TAR HEELS PUNCH THEIR TICKET TO THE CHAMPIONSHIP! 🐏🎟

Kansas vs UNC on Monday night for the title

76ers clinch their spot in the playoffs

The Sixers secure their spot in the 2022 NBA playoffs 🔔 pic.twitter.com/kq49CWKcBP

Our 4 part interview w/ @JoelEmbiid is LIVE on all platforms. This one is TRULY special.

Should Ben Simmons’ absence be a part of Joel Embiid’s MVP case?

“The 76ers could’ve easily went into a mental and emotional funk and Embiid made sure they didn’t do that. I do think that’s a factor bc it effected the play on the court.” — @Chris_Broussard pic.twitter.com/InomJvxdVm

This guy and his agent are unreal

ESPN reporting with @ramonashelburne and @BobbyMarks42 on the looming arbitration showdown with Ben Simmons filing a grievance to recoup nearly $20M in lost 76ers salary: https://t.co/U3pT5Q1GDc

Will Ben Simmons even play this season?

“The idea that Ben Simmons could be ready in nine days when the play-in starts is not realistic. Brooklyn’s going to have to get out of the play-in and into the playoffs before there can be any real conversation about Simmons ramping up to return” pic.twitter.com/WaaTqYqDZD

If you ever feel useless, just remember that Ben Simmons wears a shooting sleeve pic.twitter.com/2RQYnU7Nq2

The rich get richer

DeVante Parker is headed to the @Patriots. 😯 pic.twitter.com/1b12r6adP4

Phillies color analyst Larry Andersen has decided to further reduce his role for the 2022 season by calling 40 of the team’s 81 home games. Andersen will work alongside play-by-play announcer Scott Franzke for weekend games at Citizens Bank Park.

Mets RHP Jacob deGrom has suffered a stress reaction on his right scapula, which has caused inflammation.

He will stop throwing for up to 4 weeks and then be reevaluated. pic.twitter.com/ZvUWg96MZe

Double ouch for the Mets

Max Scherzer’s status for the start of the season is now up in the air https://t.co/YhRLWv0ihv

Cry me a river, Brian

What don’t they want us to see?

The New York Yankees have asked all 13 judges of the 2nd Circuit U.S. Court of Appeals to reverse a decision to unseal a letter from baseball Commissioner Rob Manfred to general manager Brian Cashman detailing an investigation into sign stealing. https://t.co/VnDnlXtWMJ

Fox News does it again…

For years, Georgia Republican Senate candidate Herschel Walker falsely claimed in motivational speeches and other comments that he’d graduated in the top 1% of his University of Georgia class. In fact, he didn’t graduate at all. From @KFILE : https://t.co/AG6taRKinD

Just what we need…another moron running for congress

Sarah Palin Announces Congressional Run, Does Not Appear to Be April Fool’s Jokehttps://t.co/ofMSOKjyGC

Justice Clarence should not be a justice

The text messages uncovered between Ginni Thomas and Mark Meadows are unhinged and unacceptable. Justice Clarence Thomas would’ve kept them hidden if he has his way. pic.twitter.com/mi9kytDuQQ

Let’s see how many people this triggers

Excited to share the field with our honorary captain for Saturday’s Maize and Blue Spring Game, @Kaepernick7 #GoBlue 〽 pic.twitter.com/2H6Yj2Ivwl

Nas performs at the Grammys

.@Nas finally gets his flowers — and a standing ovation — with career spanning #GRAMMYs performance https://t.co/lag3zW5iUg

The Biebs and Mrs. Biebs at the Grammys

Congratulations @ussoccer and Pennsylvania’s own homegrown stars @zacksteffen_ and @cpulisic_10 on leading us back to the biggest sporting event in the world. #OnlyForward #Qatar2022 pic.twitter.com/oWT8h7AEuy

#BREAKING: The National Weather Service confirmed a tornado touched down and caused major damage in Bucks County on Thursday nighthttps://t.co/2d1akZOnIv

Samoa Joe is All Elite

It’s official! @SamoaJoe is ALL ELITE! See you on Wednesday at #AEWDynamite! #SupercardOfHonor @AEW pic.twitter.com/n29KnFhCBP

Cardi B is a real one

Cardi B responds to a fans funny request 😂 (@RockiiiiRoadd) pic.twitter.com/YvkOUUNBS1

Paige VanZant gets cheeky with it down in Miami