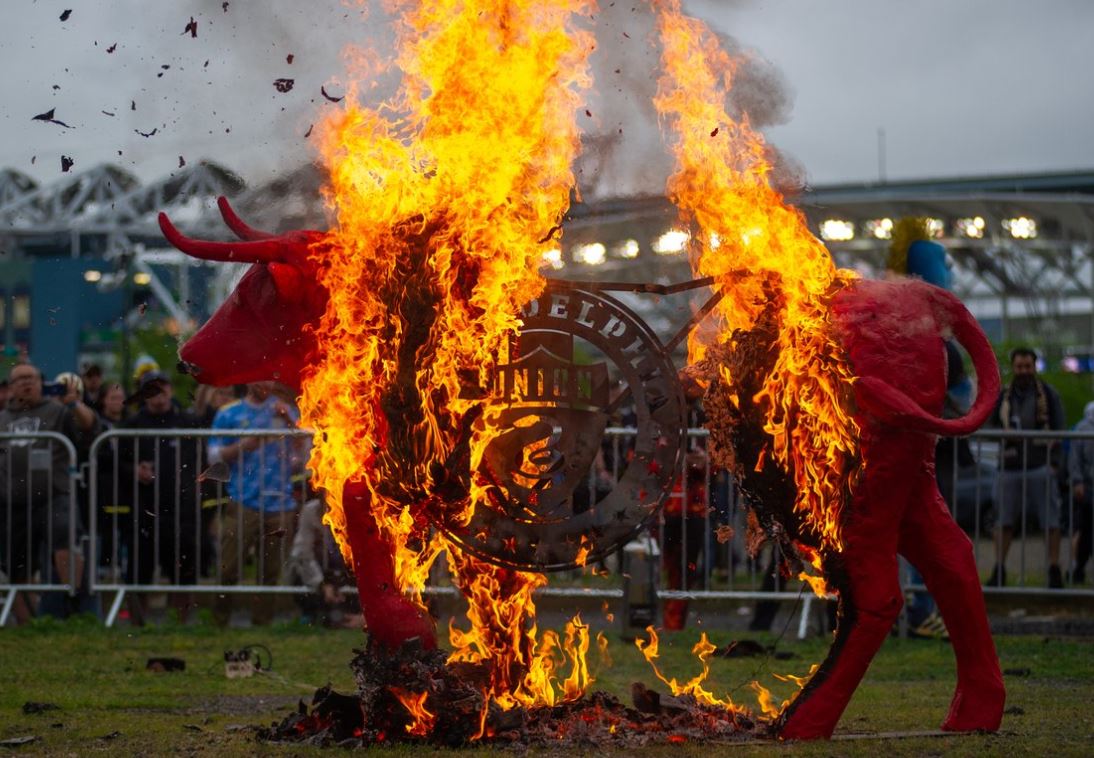 We’re back with a new Brew. The NFL schedule for this season has been released. The Sixers season came to an end. Bryce Harper is injured. The new album from Kendrick Lamar is out. Another white terrorist struck this weekend in Buffalo. The Union had another tie. We have a lot to get to, so let’s do this. It’s Brew time!

The Eagles schedule has been released

Your Sunday night football schedule for the season

Which MNF game are you most hyped for?@espn | @verizon

Brilliant: The @Seahawks fooled their players, creating a fake schedule with all the worst possible situations — including multiple road holiday games, four straight road games & no bye after their Germany game.

Quandre Diggs was sick to his stomach. 😂😂 pic.twitter.com/Z41ma8rF7M

Charlie Manuel rang the bell for the Sixers before game 6

Charlie Manuel, who won the World Series as the Phillies’ manager in 2008, rang the bell for the 76ers before tonight’s game. 🛎️

The Heat end the Sixers season

Tyrese Maxey was FRUSTRATED with Harden during this timeout 😳 pic.twitter.com/0MIDmD1Kn8

“Tobias Harris over me??”

Jimmy Butler with a strong message for the 76ers after the Heat beat Philly in the Eastern Conference Finals. “Tobias Harris over me?”

“I’m sure since we got him, everybody expected the Houston James Harden, but that’s not who he is anymore.”

Embiid on Harden after the 76ers Game 6 elimination pic.twitter.com/W9EReowHyk

James Harden took a Do-Do right in the @sixers Bed….

Daryl Morey announces Doc Rivers will return as HC of the Sixers next season pic.twitter.com/G7UzL67Vnq

Another chapter in the Miami – Boston saga pic.twitter.com/pR9RdQAJlB

Bad news for Bryce Harper and the Phillies

The Phillies provided an update on Bryce Harper’s elbow Thursday.

It’s not a worst-case scenario… but it’s not great, either. https://t.co/CwfIpRMl7A

Jay Wright showed up at the Union Game

Union with a tie on Saturday night

Even at the end of this one.

Another to prep for on Wednesday – see you there.#PHIvRBNY 1-1 | #DOOP pic.twitter.com/YjKiMksRKt

The burning of the Bulls

Put the redbulls in the middle and we’ll burn the f’ing lot! pic.twitter.com/9Zc8Cd0lZa

More than 4.6 million women joined sports betting apps in the United States last year—a 115% increase in the number of women users compared with 2020, according to a report by Global Wireless Solutions. https://t.co/gmQqYVbERa

The father and son duo who own the flagship cheesesteak shop in South Philly admitted they deceived their accountant and paid employees off the books to hide their income. https://t.co/oZpTZXgPab

#Update: A law enforcement source tells CBS News at least ten people were killed and more were injured in a mass shooting at a Buffalo supermarket. https://t.co/iCnvRdFqgN

Reading the manifesto of the 18 yr old shooter. He’s motivated by “white replacement theory.” (Sound familiar?) Says he was radicalized on 4Chan. Says he’s racist, and antisemite. Cites Dylan Roof and other shooters as models. https://t.co/IEsnWb3Pu1

With #Buffalo on the mind tonight, let’s remember who promotes white replacement theory and riles up the nut bags of society… #TuckerCarlson #FoxNews pic.twitter.com/kjLbsxyKvx

F*ck White Nationalists and all that support them

That was two weeks ago. Carlson responded at the most detailed handling of his promotion of "replacement theory" to date by laughing . The latest white supremacist slaughter won't even slow him down — Monday's show will be a grievance-fest about how people are unfair to him. pic.twitter.com/M0XbhwC58A

And yet here we are

JUST IN: The alleged gunman in Buffalo had threatened a shooting at his high school last year, authorities say.

He was sent for mental health evaluation that lasted a day and a half. https://t.co/jJb8E0Z7B7

Screaming “this is all out war!” Alex Jones and Roger Stone tell their followers that the only way to win the war against evil Democrats is to send them money and buy their products. pic.twitter.com/WgSHcyhp1f

Democrats need to do more of this

Why are you such a hater? pic.twitter.com/hMLoWo1FSc

Linkin Park from the Vault

The @linkinpark vault has given us some new but bittersweet content 🥲😍https://t.co/V2nXqFKjR8

Megan Fox and Machine Gun Kelly once again raising the bar at the #BBMAs. 🖤🔥

Corinna Kopf gets the boot from Twitch

EXCLUSIVE: An animated revival of ‘Married… with Children’ headlined by the original series’ stars Katey Sagal, Ed O’Neill, Christina Applegate and David Faustino, is being pitched to networks and streamers and is getting strong interest https://t.co/PRGq9INm1w

New Kendrick Lamar is out now

My Chemical Romance is back

After an eight-year wait, My Chemical Romance are finally back with a new song, “The Foundations of Decay” https://t.co/OxmrWiB9qG

Vanderpump Rules has officially been renewed — see which other Bravo shows got some good news today!https://t.co/UsQKVEOOPi

Superbad director Judd Apatow wants a sequel to the 2007 comedy hit, but none of the film’s stars want to be a part of it. https://t.co/yfwGoUyV6C pic.twitter.com/c6Rm0v5fKs

This is just wild!

#BREAKING: The Tampa Bay Lightning eliminated the Toronto Maple Leafs from the NHL playoffs with a 2-1 win in Game 7 https://t.co/D0mW3NKZKa