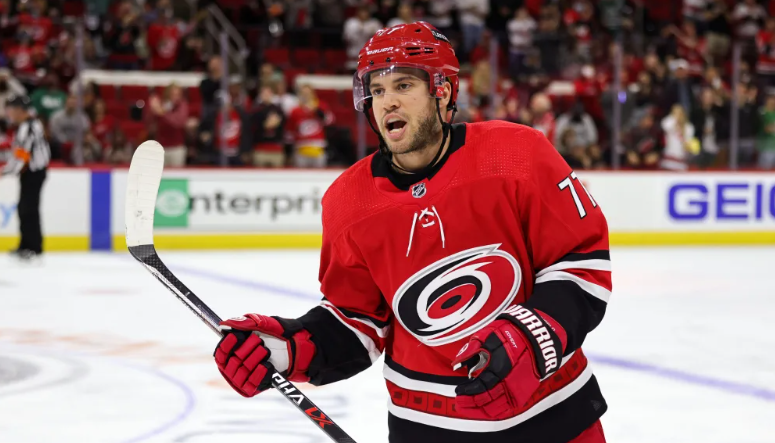 The Philadelphia Flyers added defensive help to their roster on Friday in the form of Tony DeAngelo.

DeAngelo was acquired by the Flyers in a trade with the Carolina Hurricanes, in addition to a seventh round draft pick (220th overall) in the 2022 NHL Entry Draft. In exchange, Carolina received the Flyers fourth round pick (Simon Forsmark) in 2022, third round pick in 2023 (the lowest of the three picks) and a second round pick in 2024.

DeAngelo has signed a two-year contract with the Flyers, in what will be the fourth stop in his NHL career.

“We’re very happy to add Tony to our team and I know he is very excited to join the Flyers,” said Flyers GM and President of Hockey Operations Chuck Fletcher. “We did our due diligence and we strongly believe in Tony and his ability to help our team. He is a right-handed shot who moves the puck extremely well and will drive offense from the back end for us.”

DeAngelo, 26, appeared in his first and only season with the Hurricanes in 2021-22, registering 51 points (0 goals, 41 assists) in 64 regular season games. He led the Hurricanes defensemen in goals, assists, and points, and ranked second on the team with a plus-minus rating of +30.

A native of Sewell, New Jersey, DeAngelo has played parts of six seasons in the NHL between stints with the Arizona Coyotes, New York Rangers, and Carolina Hurricanes. He also spent parts of three seasons in the American Hockey League (AHL).

The Flyers conceded the sixth-most goals in the NHL last season (298).