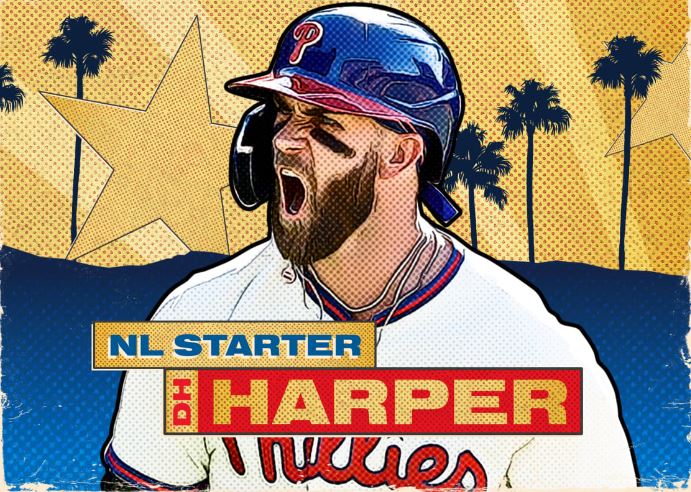 We’re back with an all new Brew. Bryce Harper has made the MLB All-Star game this year. See who will join him in Los Angeles. Elon Musk backs out of his Twitter deal. The NHL draft this past week. We know who the most fragile man in American history is. As always, we have a lot to get to. Let’s do this! It’s Brew time.

Bryce Harper is an All-Star

Your first ever fan-elected designated hitter in the NL.

The extension has a player option for the 2026-27 season. pic.twitter.com/hk0wEIyhAR

Pick #️⃣5️⃣ on it. #NHLDraft https://t.co/Kvc9KBWMMR

The end of Paige in the WWE…for now

That’s a wrap @WWE see ya again some time! Thanks everyone for the support before, during and now after! Let’s see what the future holds! And thanks @PlayersTribune for this awesome goodbye letter – https://t.co/eR80o6uAy3

Due to Tommy Fury being denied entry to the United States, @JakePaul will now face heavyweight Hasim Rahman Jr. (12-1) at Madison Square Garden on Aug. 6, Paul told @MarcRaimondi on Thursday.

The eight-round bout will be contested at 200 pounds. pic.twitter.com/A8yOEb99xE

“She’s drunk out of her mind and talking to me in the middle of a game. She’s the one who looks like she’s had 700 drinks.”

Trump “is, quite possibly, the biggest crybaby ever to toddle across history’s stage, from his inaugural-crowd hemorrhage on day one right down to his bitter, ketchup-flinging end. Seriously, what public figure in the history of the world comes close?”
https://t.co/cbXOVnOfCT

“We need to remind the anti-MAGA majority, who voted in record numbers in the last two elections, that if anything, the radicalization has gotten worse.” https://t.co/foC1xu2Kaf

The next huge battle between politicians?

Forget Donald Trump versus Joe Biden. The biggest prelude to 2024 might just be the escalating back-and-forth between Gavin Newsom and Ron DeSantishttps://t.co/mqbUad9uER

California is going to make its own insulin.

It’s simple. People should not go into debt to get life-saving medication. pic.twitter.com/yB4mpGjtQO

Fox & Friends obliviously criticizing Boris Johnson for being untrustworthy, refusing to leave office, creating chaos, and mishandling Covid — after years of running interference for you know who — is pretty rich pic.twitter.com/ddyPyri968

Herschel Walker lies to anyone that will listen

“Like a shitshow on a train in the middle of a wreck.” Amazingly, in the context of this story, I don’t think that’s a mixed metaphor. https://t.co/wQPohI6CbH

Former Japanese Prime Minister #Abe Shinzo has died after being shot Video taken by an audience member shows the movements of the suspect in the #shooting.https://t.co/koTERK8se2

They got the scum

Authorities said Anthony Nelson, 47 from Philadelphia, was taken into custody Wednesday afternoon at a casino in Atlantic City and is awaiting extradition for the June 28th shooting at a North Philly bar that killed 21-year-old Jailene Holton. https://t.co/FNuc95LdKM pic.twitter.com/9j7xFDllAr

In surveillance video released by police, the suspects can be seen attacking the victim with a traffic cone. https://t.co/uItoil1lJh

Who could’ve seen this coming?

Elon Musk tells Twitter he wants out of his deal to buy the company https://t.co/zLPt8gL6dC

How to get Krispy Kreme donuts free for a year

Tony Sirico, Paulie Walnuts on ‘The Sopranos,’ Dies at 79 https://t.co/TOKfUXIxQn

I’m back on my mission to make the world dance!
JUMP is OUT NOW

I wanna see you…
Jump into the new YOU
Jump into LOVE (Loving on you:))
Jump into FUN
Jump into DANCE

Hailey Bieber shows off her taut abs as she enjoys vacation with husband Justin Bieber in Idaho https://t.co/cQcwel3i6Z

“God Did” new album by DJ Khaled on the way 💫🔥 pic.twitter.com/2vIAwXJw9P

Your Weekly Helping Of Tidday Meats & Treats On The Gram https://t.co/fXso9twTT0 pic.twitter.com/kvVtmcSczT