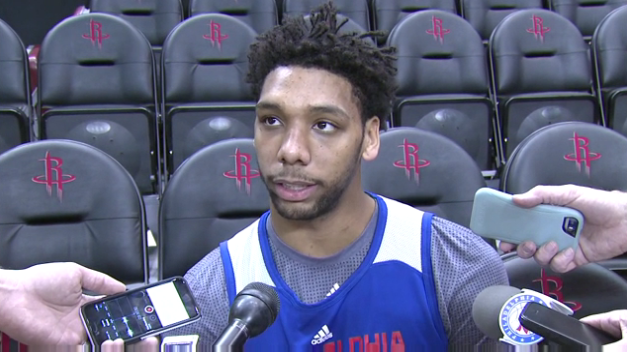 Jahlil Okafor addressed [some] media members today for the first time since a video was released of him getting in a fight outside a Boston bar on Wednesday night.

The full three-plus minute video clip is below, but here are some of the main quotes from Okafor addressing the fallout from the fight.

It was definitely dumb on my part. Something I’m embarrassed about. We’re still dealing with the league, and with the team. I’m not happy about it at all. We’re still going through the whole process of trying to figure out what we’re going to do.

“Yeah, that’s pretty much the story. Just leaving, trying to go and people just making fun of us, how we been losing, and I did a dumb thing and reacted.”

“[Losing] does get frustrating. It doesn’t happen often, people coming at me, heckling and making fun of me for losing. Something I’ve known, I’m in the spotlight and know that there are people like that that just want to try to anger you and I’ll never handle it like that again. It’s something I do realize, that I’m in the spotlight.”

Okafor apparently notified his coach the morning after on the plane before the team headed to Houston. Brett Brown also addressed the media, as well.