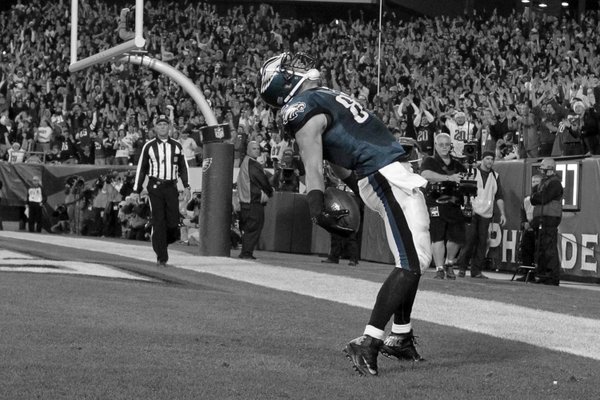 A few days ago the Eagles re-signed Brent Celek to a three-year, $13 million dollar contract extension. The deal reportedly includes $6 million guaranteed. That in itself shows exactly how much the Eagles value Celek, despite Zach Ertz being the primary tight end.

For the season Celek only had 27 receptions for 398 yards and three touchdowns, though Chip Kelly’s offense was pretty bland all season, so Celek will get a pass from me this year. For his career however, he has 371 receptions for 4,713 yards and and 30 touchdowns.

Celek mentioned that when his agent gave him the news the other night that the Eagles had chosen to re-sign him, he was overcome with emotion as Reuben Frank detailed his comments:

I was so excited I probably had tears coming out of my eyes. I just went downstairs and sat on my couch and just thought about everything it took to get to here and where we need to go as an organization.”

Today the Eagles held the official press conference for his re-signing. Let’s listen to a little of what Celek had to say.

Here’s the top three quotes from the press conference:

1. “We need to win a championship here. We need to capitalize.”

Man, you have to love a player that feels the same sense of urgency that the fans do.

2. “I love this organization. The only thing I can do is everything in my power to give it back to ’em. So work our butts off and try to bring a championship back to Philadelphia.”

As a Philadelphia fan, I get goose bumps when I hear a player genuinely say that a Championship needs to be won for the city itself. He gets it. This city has seen so much heartbreak with our sports teams. We’re the butt of every bad joke about not winning championships. At some point it has to happen and when it does, it will be epic.

3. “This is the greatest city to play for. To be able to really stay anywhere for the length of your career is absolutely amazing. The fact that I’ve been able to do it here is wonderful.”

Again he went back to to talk about the city. At this point, if I was a chick he’d be my #ManCrushMonday next week.

One other piece of notable news to come from the press conference was that Celek stated that he wasn’t sure if Sam Bradford would be back. Right now that’s the million dollar question. Some of the Eagles’ players have publicly come out and said that they want Bradford back, but we’ll see how it plays out. I’m sure that the team wouldn’t mind bringing him back, but probably not at a hefty price tag.