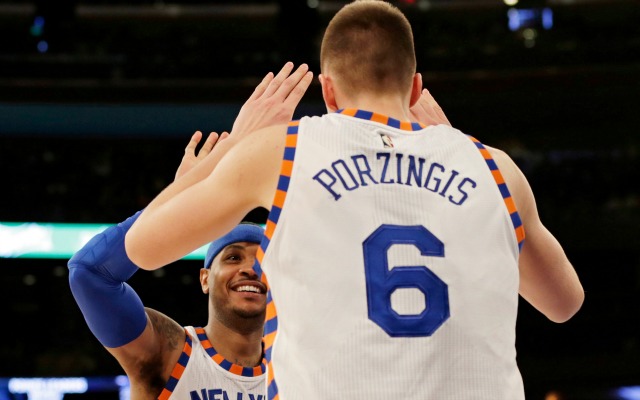 Kristaps Porzingis wanted to play for the New York Knicks bad, but for that to happen first the Knicks would have to have mutual feelings about Porzingis. Secondly, certain chips would have to fall properly in the draft for him to end up on the Knicks. With D’Angelo Russell getting selected by the Lakers and Jahlil Okafor being picked by the Sixers, the rest is history.

Porzingis had workouts with the Knicks and he and his agent dined with Knicks’ President Phil Jackson. However, one team that had trouble even making contact with Porzingis was the Sixers as Adrian Wojnarowski of Yahoo Sports detailed in a very interesting article that you can read here.

I’ll skip to the part involving the Sixers. Here’s some of what Wojo had to say about the lengths that the Porzingis camp went to not meet with Sam Hinkie and the Sixers.

Whatever happened, Miller didn’t make it easy for Philadelphia to draft Porzingis at No. 3. The Sixers wouldn’t be afforded Porzingis’ physical, nor get a private workout, nor even a face-to-face meeting. After most of the pro day executives cleared out of the gym in Vegas in mid-June, 76ers general manager Sam Hinkie lingered to meet with Miller. Hinkie stopped him in the lobby area and asked Miller about a chance to sit down and visit with Porzingis.

“You said that I would get a meeting with him here,” Hinkie told Miller.

An awkward silence lingered, the GM and agent, standing and staring. The Porzingis camp wanted no part of the Sixers’ situation at No 3. Miller couldn’t stop Philadelphia from drafting Porzingis, but he could limit the information they had to make a decision. And did. No physical. No meeting. No workout. The Sixers passed on Porzingis on draft night, clearing the way for the Knicks to select him.

Philadelphia 76ers Insider for Philly Mag Derek Bodner seemed to be taken aback at the reaction to this story and released a series of tweets to share where he was coming from in his thinking.

I'm kind of surprised at the reaction over the Andy Miller/Porzingis bit. It's an old story.

That Miller wanted Philly to pass on Porzingis and wanted him to go to NY/ORL has been known for almost a year.

And it makes sense an agent would want that. Even beyond any personal feelings toward Hinkie, NY had no long-term frontcourt presence and…

…The most marketable city in America. It was the perfect opportunity. That the Sixers didn't get a meeting/individual workout also known.

And none of that is to say that Hinkie's relationship with agents isn't an issue. It is. Just that story on this was kind of already known.

We’ve well documented the fact that Sam Hinkie is essentially a cancer to this organization, so this story certainly doesn’t come as a surprise. It’s just interesting to hear the lengths that the Porzingis camp went to avoid Hinkie and gun to my head, I’d say there were many agents trying to steer their clients away from the Sixers. Look, what it comes down to is that Hinkie was essentially that kid in school that no chick wanted to go near. It’s a shame, but Hinkie certainly brought a lot of this stuff on himself.