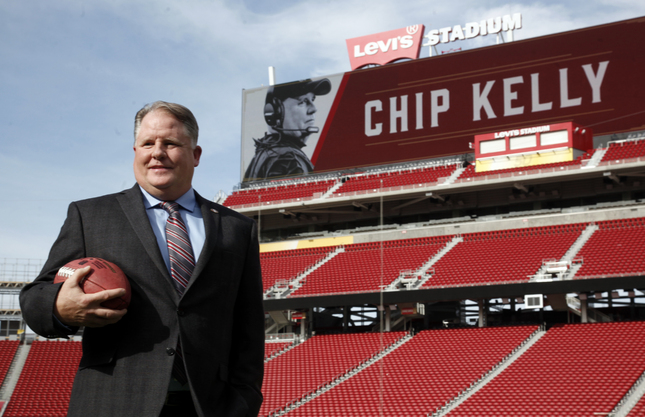 I’m going to keep this one short and sweet, so that this can marinate in the souls of all Eagles’ fans. Chip Kelly was speaking about Colin Kaepernick and said something that may give Eagles’ fans an instant heart attack. Here’s what Kelly had to say, courtesy of The Sacramento Bee:

Kap’s really good. I mean, he had the ball on the 5-yard line (intending on) taking the team in to win a Super Bowl. You can just look at the tape to see how talented he is. You know, our job is acquiring talent, not getting rid of talent.”

Chip Kelly on Colin Kaepernick: ‘Our job is acquiring talent, not getting rid of talent.’ … #49ers https://t.co/6QLXpuhZFr

Are you kidding me? Since when? That certainly was not his motto in Philadelphia. I’m so over him.

[Editor’s note: This is hilarious. Chip Kelly trollin’ on in the afterlife. And honestly, I’m sure Chip thought he was acquiring talent here, too. But moving on from guys like DeSean Jackson, LeSean McCoy and Jeremy Maclin and failing to adequately replace them was his biggest failure. It remains to be seen if he’ll be able to fix that.]