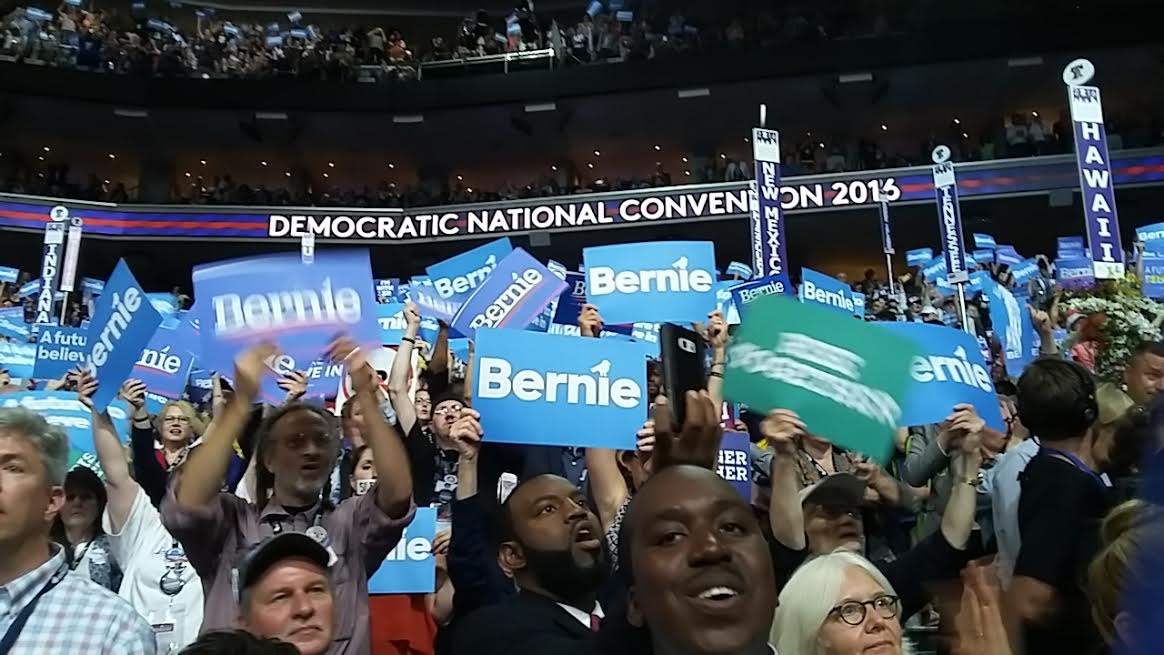 The march to the presidential election continues as the Democrats officially kicked off their convention yesterday in Philadelphia at the Wells Fargo Center. Amidst the most recent scandals plaguing the democrats there was a bit of divisiveness in the air and perhaps symbolically as the primetime speakers began, a dark ominous cloud that brought thunder and lightning hovered over the arena. 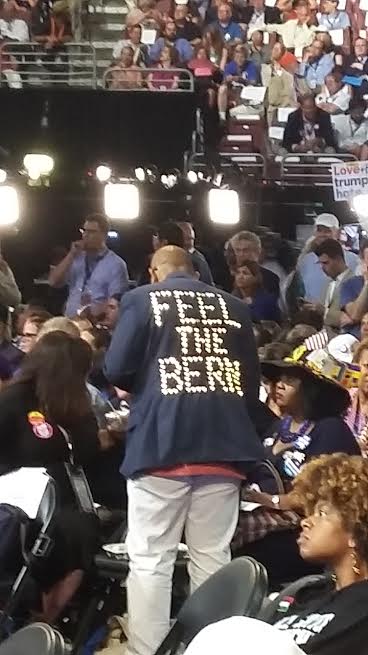 In what can only be described as a tale of two worlds, there was a stark contrast between the outside of the convention and inside the doors of the Wells Fargo Center. Outside the convention by the subway station at Broad and Pattison, in sweltering heat and a torrential downpour, hundreds of protesters flocked displaying their rage of what was revealed as the rigged system of the Democratic National Committee. Loudly chanting mantras such as “Hell No D.N.C., we won’t vote for Hillary,” they let their feelings known of their anger and unhappiness. 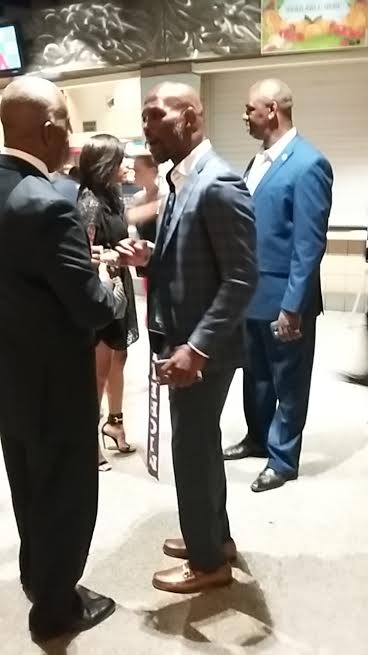 Inside the convention, however, was an entirely different story. Glitz and glamour ruled the evening. Thousands of people from all over the country gathered with high enthusiasm on the first day of nominating the first woman for president in the history of our country of a major political party. The aura of celebration dominated over any possible dissension of these Democrats. Entertainers such as Demi Lovato and Paul Simon revved up the crowd with performances of some of their hits. 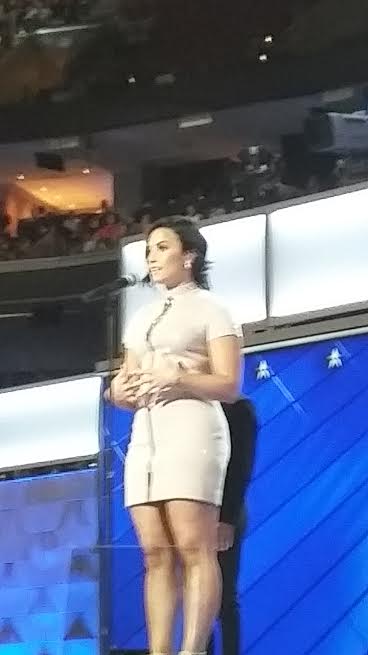 The biggest stars of the night had undoubtedly had to be the First Lady, Michelle Obama and Senator Bernie Sanders. Both of their speeches were received to raucous ovations and brought the house down. Mr. Sanders who has become somewhat of a martyr during this election given how his candidacy was screwed over by the Democratic National Committee had perhaps the loudest ovation. After being introduced, it was several minutes before he could begin his speech to which he repeatedly and emphatically thanked his supporters. 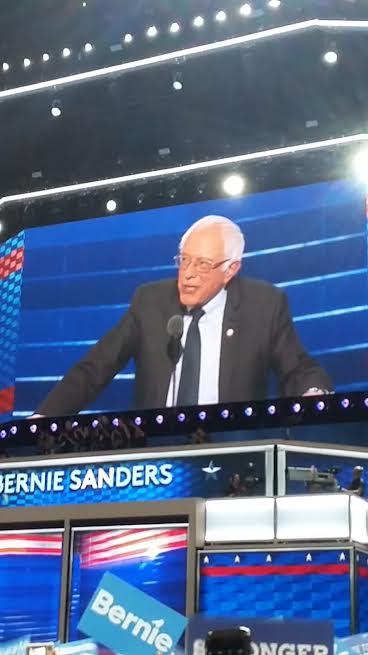 The contents of Mr. Sanders speech was a theme of unification for the party. He highlighted much of his own political platform of the progress he believed needed to be made in the future but always came back to the theme that Hillary Clinton was the one suited to accomplish these tasks and preached support for her. It was the first step in what many Democrats hope was the healing process as they move toward the presidential election in November in what is predicted to be a very close, tight race.

It was a joyous night overall for the Democrats. From the entertainers, to Democrat political stars such as Corey Booker, Al Franken and Elizabeth Warren, the message and theme was “unify.” However, as joyous as it was on the inside, it was the total opposite outside the arena and among many Democrat voters. The Democrats might have a long road to ho to accomplish unity for this election for as much as the feelings were positive inside the Wells Fargo Center, rage and our country’s greatest right – freedom of speech – were on display outside making it known, this election will be no easy task. 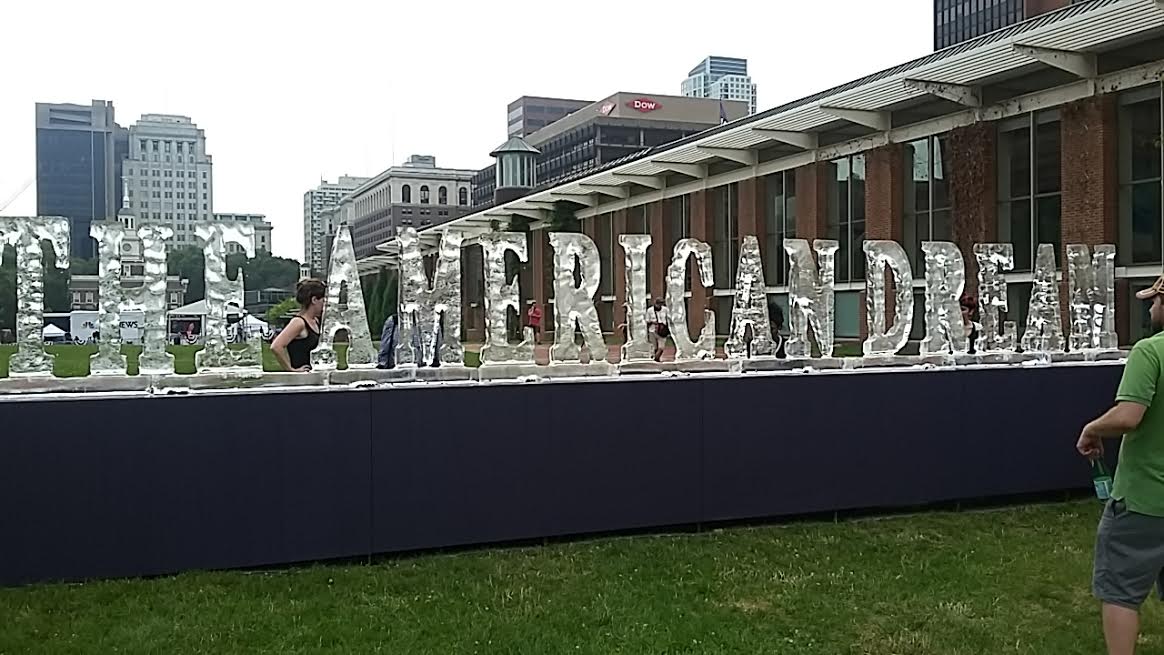 This article was written by Christopher Tremoglie, who will be doing some freelance work this week during the Democratic National Convention in Philly for us so we can give our readers every bit of coverage possible from downtown Philly. Follow Chris on Twitter (@theChrisTremo).