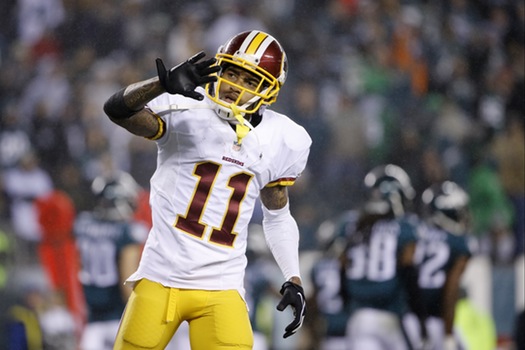 The rumors of DeSean Jackson possibly returning to the Eagles were set in motion back in October when Jackson, on a conference call with reporters, didn’t rule out returning to the Eagles after this season is over. Jackson’s set to become a free agent, and the Eagles desperately need help at the wide receiver position, so it’d make sense for both parties to show mutual interest. Especially since Chip Kelly is no longer the head coach of the Eagles.

In an Instagram live video on Saturday night, LeSean McCoy apparently said Jackson was “going back,” which could mean he means going back to Philly.

Brandon Graham, however, probably had the most glaring remarks about Jackson’s possible return to Philly. In fact, Tuesday morning on Breakfast on Broad, Graham said he already knew Jackson was [or wants to?] returning to the Eagles after this season.

“It’s an exciting feeling to get an Eagle back. I’m excited because he should have never left. Everybody knows that DeSean, yes, things were happening while he was here, but he’s a good guy. I used to be with him all the time.

“I’m just happy because I kinda knew already. I’ve talked to him. I talked to him when Doug (Pederson) got hired. We have fun during the season. He’s like, ‘B.G. you know I’ll be back, man.’ But now that it’s official, as far as the season about to be over, I think you’ll be hearing a lot of noise about DeSean … I’m saying official as far as the end of season, now we’re gonna really see.”

You could argue Graham meant he “knew already” about Jackson’s desire to return to the Eagles, but it’s far from a slam dunk. The Eagles should have some money to spend, but they clearly won’t be the only team interested in acquiring Jackson’s services. As far as we can tell, he’s stayed out of trouble down in D.C. and it just makes so much sense for a reunion. Probably because we’re so used to how terrible the wide receivers have been recently. Sure, Jackson’s getting older, but him being on the field may help the other receivers. You know, if he tries.

Hell, if there’s a better wide receiver out there, the Eagles need to get whoever it is.