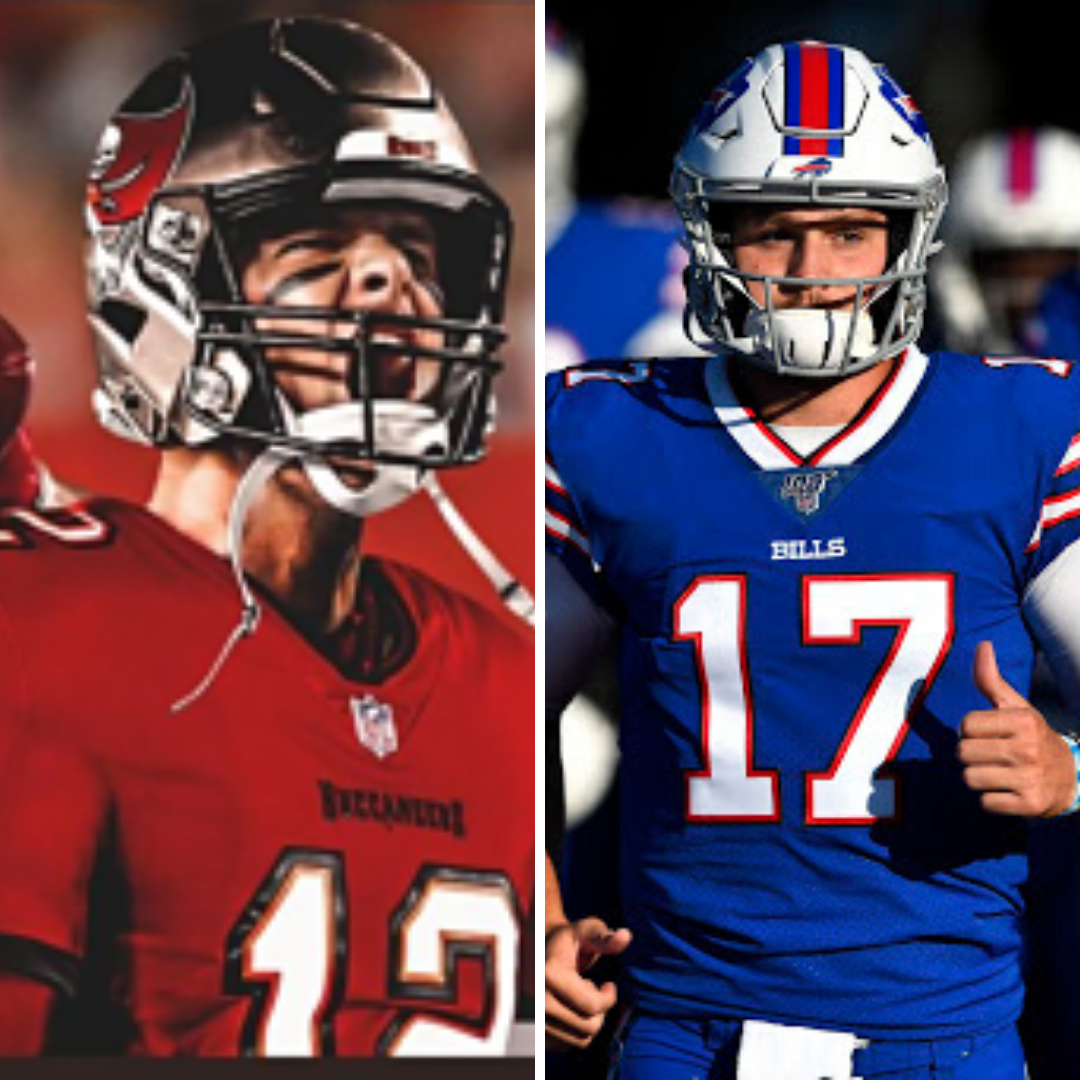 In this week’s installment of Futures Faceoff, I’m focusing on two teams with high expectations heading into the 2020 season.

The Buffalo Bills are doing it the old fashioned way. Build a defense, draft a strong-armed quarterback, put the pieces around him to succeed, and give him keys. The Tampa Bay Buccaneers put their plan in overdrive by building an offense and culture that enticed the greatest quarterback of all-time to leave the dynasty he led to six Super Bowl titles. Which team is the best bet for 2020? I will take a hard look into both of these exciting teams, analyze their strengths and weaknesses, and see how they stack up for 2020. The goal is to determine which team is the better investment, based on the current odds, in the NFL futures win total market. Let’s try to look past the headlines and make a strong determination into whether the Bills or the Bucs are the better bet this season.

The Tampa Bay Buccaneers sent shockwaves throughout the NFL when they signed the greatest quarterback of all-time in Tom Brady. Brady is obviously a gigantic upgrade to an offense that was already one of the most explosive groups in the NFL. Bruce Arian’s offense could have been the NFL’s best if they received consistent play from the quarterback position last season. They were fourth in overall scoring while leading the NFL in giveaways [30 of their 41 giveaways coming from interceptions]. That’s almost two interceptions per game, in addition to the fact that the Bucs had the third-lowest percentage of punts and three-and-outs per drive last season.

History has shown Brady is an excellent caretaker of the football and all signs point to him being able to lead this offense to record numbers. Even at age 42, he was seventh in the NFL in passing yards on a New England offense with much lesser talent. Tampa Bay made the protection of its prized acquisition a top priority and selected Iowa’s OT Tristan Wirfs in the first round of this year’s draft. If Arians can scheme up an elite off-season with Jameis Winston behind center, imagine what happens with Brady is driving the ship. Expect plenty of cannons this season at Raymond James Stadium.

Buffalo fans have a lot to be excited about heading into 2020. General manager Brandon Beane showed a strong commitment to putting weapons around quarterback Josh Allen as he enters his pivotal third year. Nobody can argue the defense carried the Bills to the playoffs last season. Sending a significant amount of draft capital in exchange for wide receiver Stefon Diggs gives Allen the best route runner in the NFL. The Bills’ offense has a great combination of speed and athleticism on the outside and drafted the perfect power complement to running back Devin Singletary in Zack Moss.

He’s now finished above the 93rd percentile against man coverage for three-straight years. He is the best route runner in the NFL.

Offensive coordinator Brian Daboll did a fantastic job of putting his young quarterback in a position to succeed in 2019. Daboll’s shift to an uptempo offense had a lasting impact on his young signal-caller. The key to 2020 is whether Allen can make that jump and become the franchise quarterback he was drafted to be. Allen will have to improve his accuracy, but there is no doubt the organization has surrounded him with all the tools necessary to deliver this season.

The only Super Bowl in Bucs history was won on the back of a dominant defense. That side of the ball has been the Achilles heel for the franchise the last several years, but second-year coordinator Todd Bowles is making significant strides. Tampa Bay’s defensive ranks don’t tell the whole story, as a large part of their struggles last season can be linked to the burden of playing with an offense that turned the ball over so frequently. Bowles took a unit that ranked dead last in defensive efficiency in 2018 and molded them into a top five defense under the same metrics. Their top three ranking in weighted defensive efficiency also shows the group was continuing to improve as the season progressed. Some advanced statistics, such as opponent’s yards per play, have the Bucs just outside the top five, tied with then Chicago Bears in allowing 5.1 yards per play. With the addition of Antoine Winfield Jr. to an up-and-coming secondary, the Bucs’ defense could be poised to improve on their top five ranking in takeaways as well.

Everyone will focus on the offense and yes, there’s a lot to like. But, quietly, the @Buccaneers did some great work in free agency even before @TomBrady signed. JPP, Suh, and Shaq Barrett are all coming back. Lavonte David and Devin White are star LBs.” —@PSchrags pic.twitter.com/tLFSBQI9Gk

Teams often mirror the personality of their coaches, and that’s a good thing for the Buffalo Bills. Sean McDermott has built a technically sound, disciplined, and aggressive defense ran by defensive coordinator Leslie Frazier. Anchored by rising superstar cornerback Tre’Davious White, the Bills’ pass defense ranked fourth in yards per game allowed. A top five defense in most statistical passing categories, the secondary took pride in its ability to shut down big plays and keep everything in front of the safeties. The results spoke for themselves, as Buffalo allowed the least amount of explosive pass plays in 2019. There are questions regarding the level of competition, as the Bills faced the second-easiest schedule based on opponents’ offensive DVOA. However, they did prove against Baltimore and Dallas they can get the job done against the NFL’s top offenses. The defense will run it back with most starters returning and an even more positive outlook in 2020.

The Buccaneers are a perfect example of how a team’s outlook can drastically shift in one off-season. For this reason, I utilize Sharp Football’s strength of schedule which is formulated from each team’s 2020 forecasted win totals. This gives us a more updated look at the difficulty of opponents.

If you want the throne, go right at the king. Brady’s new team kicks the season off in the Big Easy against the defending NFC South champion Saints. After that marquee matchup, things get a little easier for Brady’s Bucs. One key factor that is they do not face a team that finished with a winning record in their five out of division road games (Detroit, NY Giants, Chicago, Denver, Las Vegas). Those teams combined for a record of 29-50-1. Plus, Brady gets the benefit of playing seven games indoors this season, including all four games in the month of December. Very advantageous for a team with an explosive offense that plays in a hot weather climate.

The Bills’ overall strength of schedule is fairly balanced as they draw the 15th most difficult path in the NFL. Not bad for an ascending team looking to make the jump into the NFL’s elite. Opening up against an Adam Gase-led Jets offense should allow the defense to pick up right where they left off last season. The most revealing aspect of the schedule is that we will learn everything we need to know going forward about Allen. The Bills quarterback benefitted from the fifthth easiest schedule in 2019 in regards to pass defensive efficiency of opponents. In 2020, Allen will be up against the fifth toughest. Back-to-back games vs. the Titans and Chiefs in Weeks 5 and 6 should serve as a good litmus test for McDermott’s group.

Are we ready to bank on Josh Allen?

The Bills are a very promising football team. I came away from 2019 very impressed with the coaching staff and I think the front office did a great job building the offense in the off-season. Coming off a 10-win season, there are just more questions surrounding this team than I see with Tampa Bay. It starts at the quarterback position. As athletically gifted as Allen is, can he improve his accuracy enough to take this offense to the next level? Accuracy is a trait of his that has not significantly improved at the NFL level, and his 58% completion percentage is a major concern. Adding an elite receiver like Diggs to his arsenal will only help if Allen is able to hit his target consistently. PFF ranked Allen 32nd in deep-ball passing, and had this to say about the Bills’ young QB:

“His adjusted completion rate was one of the worst figures in all of football, and he had the highest rate of uncatchable, inaccurate passes on those targets. Allen needs to find the touch to go with that cannon because it’s frankly inexcusable that a player with his kind of arm talent is this bad at passing deep.”

Allen’s challenges were on full display last Wild Card Weekend when he coughed up a 16-0 lead to the Houston Texans in a 22-19 overtime loss. The Texans’ 26th ranked defense that got scorched for 51 points the following week in Kansas City held Allen in check after the first half.  The Bills’ QB was 11-26 for only 131 yards the rest of the game including a key fumble that shifted the momentum. It’s very possible that game could be a precursor to how Allen can hold back this Bills team if he doesn’t improve his accuracy.

Bet on Brady and the Bucs to win 10 games

The hype is real behind the Tampa Bay Buccaneers and getting them at -110 to win over 9.5 games is one of my favorite wagers in the NFL futures market. One of the key stats that I weigh heavily in my analysis is net yards per play. It’s a simple calculation where you subtract a team’s average yards per play allowed from their average yards per play gained by the offense. Tampa Bay’s 0.8 net was tied for the fourth overall in the NFL with the Super Bowl Champion Kansas City Chiefs. Two of the three teams ranked higher won at least 13 games, and the other six teams ranked in the top seven averaged 11.5 wins. Tampa Bay easily has the talent around Brady to win 10 games. For comparison purposes, the Bills’ 0.3 net yards per play was ranked 12th in the NFL, sandwiched between the Titans and the 7-9 Raiders.

It’s very possible the Bills can win the nine games to hit the over on the win total, but you are paying a premium price at -130 for a team with some pretty big questions at the most important position in football. The Bills’ defense turned some heads last season, but the team as a whole wasn’t able to deliver when it counted. The Bills were 1-4 against teams that made the postseason, so any uptick in the strength of schedule should be taken seriously. It seems a little risky to take an unproven team at -130, where you are only winning $76.92 for every $100 wager.

Tampa Bay’s price point is much more favorable despite having their win total a full game higher at 9.5. At -110, your wager yields a 90.91% return. Based on some of the data and key metrics we discussed, I am very comfortable handicapping the Buccaneers to finish three games better than last season’s 7-9 record. I can not stress enough how important turnovers are to deciding the outcomes of NFL games. From 2005-2018, teams with a +2 turnover margin won over 82% of the their games. This is especially relevant to the Buccaneers, who defensively had the fifth most takeaways in the NFL. In 2020, they have a quarterback who is going to turn those takeaways into touchdowns instead of giving it back to the opponent 1.875 times a game. Brady is one of the most profitable QBs of all-time and his run is far from over. I am all-in on the Tampa Bay Buccaneers this season, and I suggest you back them, too!