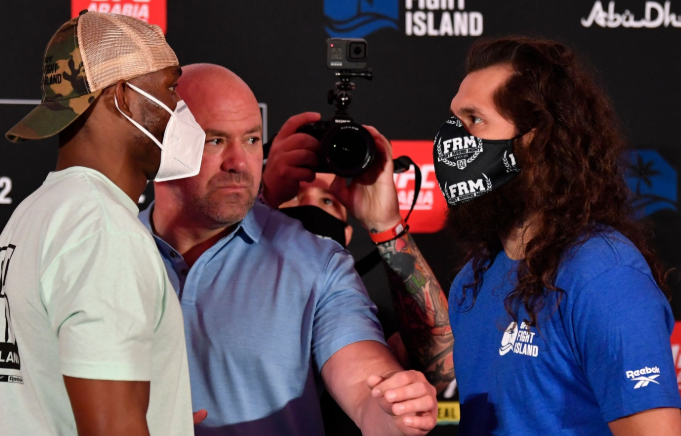 People … I have four words for you … Fight Island is here. Tonight is the inaugural card at beautiful Yas Island in Abu Dhabi – the night we’ve all been waiting for.

Three – yes, THREE [your eyes are working just fine] belts are on the line. Dana White and co. did a fantastic job putting this event together, as well as the other events, maneuvering through the hell on earth that has been the COVID-19 pandemic.

Enough talk, let’s get to the fights.

With a new night of fights, I want to try something a little different and break from my normal layout. This new section is called “Two-Piece” and I’ll give two quick, worthwhile plays. First: parlay the Amanda Ribas and Rose Namajunas moneylines (-770 and -215) to bring the odds to -152 which is a lot better than betting separately.

Second: Volkan Oezdemir by decision at +375. A lot more fights that appear like guaranteed knockouts have been going the distance.

New card, same storyline: Yan is an up-and-comer whose trademark victories are over a washed-up Urijah Faber, an overrated Josh Dodson, and Jimmie Rivera. Aldo, on the other hand, has seen it all – with victories over legends like Frankie Edgar and Urijah Faber as well as tough fighters like Chad Mendes, Cub Swanson, Jeremy Stephens, and Ricardo Lamas.

Aldo doesn’t lose to nobodies. He had his first loss in 2005 then didn’t lose again until a freak knockout in 2015 at the hands of a surging Conor McGregor. Since then, he’s lost twice to Max Holloway, Alex Volkanovski, and Marlon Moraes. If Yan beats Aldo it cements him as the real deal and places him in control of his own destiny atop the bantamweight ranks. If Aldo wins it’s another notch in his belt and a feather in his hall of fame cap.

For my money, I’d hit the Aldo moneyline. Yan hasn’t proven enough to me yet and back-to-back losses to Volkanovski and Moraes don’t phase me at all. Getting plus money on Aldo is an absolute no brainer, I’ll take it all day long.

I said it before the card and I’ll say it again, this will be the best fight of the night. Book it.

Volkanovski has been a problem since entering the UFC in 2016, compiling a perfect 8-0 record including three knockouts and five unanimous decision victories. He holds wins over Aldo, Holloway, Chad Mendes, and Darren Elkins.

On the flip side, Holloway was one of the hottest fighters in the UFC until he met Volkanovski. He suffered back-to-back losses to Dennis Bermudez and Conor McGregor before racking off a 13-fight win streak which included wins over Aldo (twice), Frankie Edgar, Anthony Pettis, Brian Ortega, and Ricardo Lamas.

For me, this is almost as easy as picking the Aldo fight – give me the Holloway moneyline. I’m not straying away from the prediction I made on Fox Sports the Gambler two weeks ago. I think Holloway wins setting up an eventual trilogy fight.

The main event of Fight Island. Jorge Masvidal steps in on six days’ notice to take on the champ after challenger Gilbert Burns tested positive for COVID-19.

Usman is a bad man. Period. Full stop. “The Nigerian Nightmare” hasn’t lost a professional fight since 2013 before he made his UFC debut. He ran through the Welterweight division before dismantling Tyron Woodley in 2019 for the belt and defended said belt by way of knockout over loudmouth Colby Covington.

While Usman is a bad man only one man in the UFC holds the official title of BMF and that is Jorge Masvidal. The man is riding three straight knockouts and has just as much UFC experience as anybody in the promotion.

Usman is a heavy favorite in this fight and for good reason, he’s a takedown machine and has the ability to stand and throw hands with the best of them. That said, I wouldn’t count out Masvidal. There’s a history of fighters taking fights on short notice and coming out victorious – look at Nate Diaz submitting McGregor in 2016. Look at Michael Bisping knocking out Luke Rockhold that same year. There’s not a doubt in my mind that Masvidal over Usman could fall into the same category.

I like the Masvidal moneyline at +190. If you’re looking to bet the champ and want to get plus money, Usman by decision runs at +150 while a win by KO, TKO, submission, or DQ goes at +175.