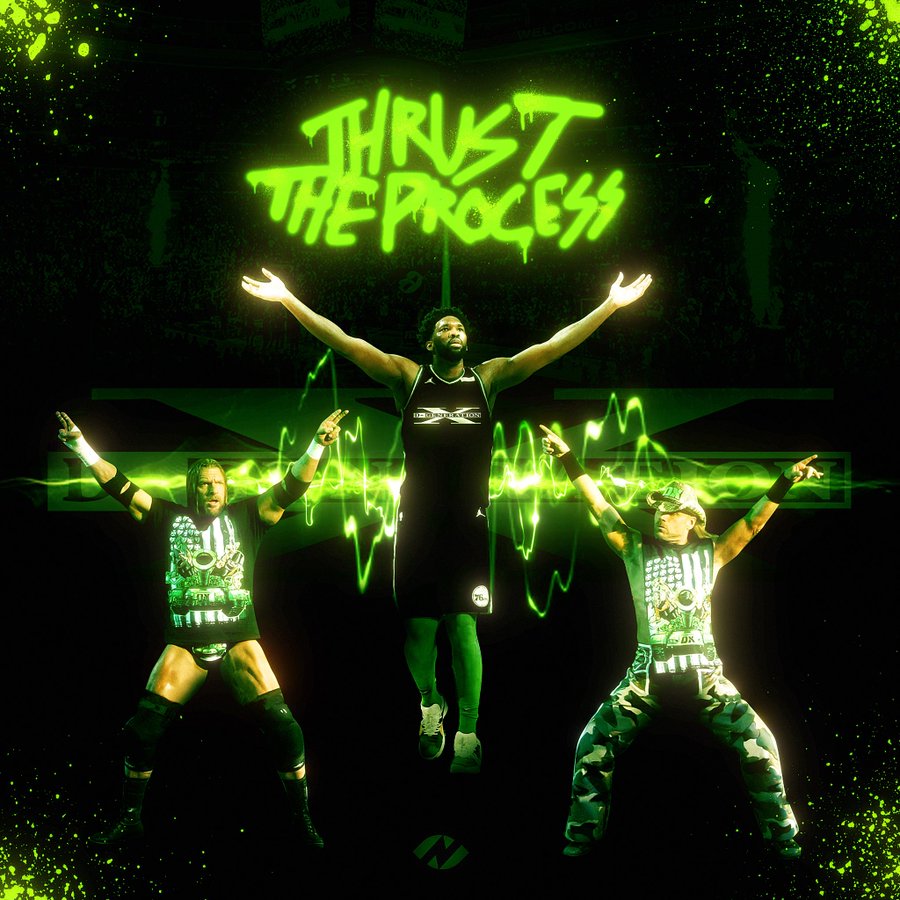 We’re back! It’s June. The Sixers are in full command of their series against the Wizards, leading 3-1. Joel Embiid has the City of Philadelphia in the palm of his hands and if you’re not down with that – well, he has two words for you. Unfortunately, Game 4 saw Embiid go down with an injury. Game 5 in Philly will see a full crowd at the Wells Fargo Center. Meanwhile, fans in sports are getting completely out of hand. AEW’s Double or Nothing took place Sunday night and was a good one. So let’s keep it moving and get things started. It’s Brew time.

The legend of Joel Embiid continues to grow

Embiid’s celebration after this and-1 😅 pic.twitter.com/Z6spcMPDaG

If you’re not down with the process, I got two words for ya **** ** #ThrustTheProcess #DX pic.twitter.com/oUr8Rst2XT

Jojo is a big DX fan

Joel Embiid on his on-the-ground celebration: “DX, Triple H and Shawn Michaels, were my favorite wrestlers.”

.@JoelEmbiid is officially the newest member of DX. https://t.co/U94LwxYkpf pic.twitter.com/8vP2OareP9

I don’t want it to stop

The Sixers were dominant in Game 3

One game from a sweep 🧹 pic.twitter.com/uUS2ZJbzTf

The Sixers had them shook in Game 3

Davis Bertans was too scared of Joel Embiid so he just gave up the ball. pic.twitter.com/kQJ9VN1ha0

And another one from Triple H

Joel Embiid went down in Game 4 with an injury

Joel Embiid won’t return to Game 4 after a hard fall caused a knee injury. It could be horrible news for the Sixers.https://t.co/6k9AKVJQqD

Here was the injury

No official word from the Sixers yet on Joel Embiid’s injury, but here’s the fall he took not long before leaving for the locker room.pic.twitter.com/s3NufD3LXs

One idiot ruined it for the City

fan pours popcorn on Westbrook as he’s being assisted off floor with an injury pic.twitter.com/tGcn4kqRqq

Russell Westbrook had this to say after a fan in Philadelphia poured popcorn on his head while leaving the court with an ankle injury ⤵️ pic.twitter.com/MzO58QYjtR

Statement from the Sixers

Statement from the Philadelphia 76ers: Fan who dumped popcorn on Wizards‘ Russell Westbrook has had his season ticket revoked and been banned from Wells Fargo Center indefinitely. pic.twitter.com/jVBWWVcZjT

Statement from the Wells Fargo Center

Everyone is talking about the Sixers fan dumping popcorn on Westbrook, but let’s not ignore the Knicks fan spitting on Trae Young pic.twitter.com/HWioRIs8Al

A fan throws a water bottle at Kyrie as he leaves the floor.

A fan was arrested in Boston on Sunday for throwing a bottle at Brooklyn Nets player Kyrie Irving, following the visiting team’s win over the Celtics.

—KD after a fan in Boston threw a water bottle at Kyrie pic.twitter.com/AY4RJL3viY

And then we have this Dodgers fan

Back to New York – these fans want a participation trophy

Win one playoff game and we don’t know how to act LMFAO pic.twitter.com/bks9pHcyiH

And I don’t think these fans really want the smoke

Did I do this right? Is this trolling? pic.twitter.com/VJygZWzkeq

The Bucks make easy work of the Heat

The Bucks sweep the Heat to advance to the second round. #NBAPlayoffs pic.twitter.com/dwNQuboueZ

An entrance only fitting for The Inner Circle #AEWDoN #DoubleOrNothing pic.twitter.com/V1UHI6Mxxj

When the AEW meets the NFL

Good stuff after the show

Double or Nothing going off the air with the crowd all singing Judas is fucking legendary. #DoubleOrNothing pic.twitter.com/sJIDav5VVF

It’s all about the up and comers

AEW’s ‘Double or Nothing’ put a spotlight on up-and-coming stars https://t.co/PvCZ9OOzCO pic.twitter.com/rIoKKk5Qxd

Another former member of the WWE is heading to AEW

Senate Republicans blocked a bill today that would form an independent commission to probe the Jan. 6 Capitol riot, the first filibuster of the year by the chamber’s 50-vote minority.

35 Senate Republicans voted to cover-up the deadly attacks of January 6, 2021.

Republicans: We don’t want anyone investigating this: pic.twitter.com/S0O8Ax14mp

The mother of fallen US Capitol Police Officer Brian Sicknick says she was disappointed Senate Republicans blocked a bill to create a bipartisan commission to investigate the Capitol riot after what she described as “tense” meetings with many GOP senators https://t.co/JsLjf3F1A3

Another one of the scumbags was caught

This video we’ve been watching for weeks on the FBI’s website for wanted Jan 6 suspects has been removed. And a Covington, Kentucky man is under arrest and facing assault charge. (Thread) pic.twitter.com/z2Nz0zq2PR

Can you imagine a scenario where hundreds of Black people violently storm the Capitol and assault police officers in an armed insurrection to stop the functioning of the US government and then ANY Republican in Congress votes against a Commission to investigate what happened? https://t.co/L5XZDJskjP

This is not normal

Here is video of former general and National Security Advisor Mike Flynn calling for a Myanmar-like coup to replace the sitting U.S. president with Donald Trump. The talk of war is very real. pic.twitter.com/1GoP5OG1He

The President takes a dig at some hypocrites

“Some people have no shame.” President Joe Biden takes a dig at Republicans who are touting the impact of COVID-19 relief despite voting against the legislation, showing what he said was a list of the GOP lawmakers guilty of the behavior. https://t.co/6RaY57gQgF pic.twitter.com/GApBnlIZwI

A lunatic flew on Southwest Airlines

What is wrong with people today?

Unruly behavior from plane passengers has never been this bad, says flight attendant union chief. “This is an environment that we just haven’t seen before, and we can’t wait for it to be over.” https://t.co/2tqqywfAdP

While on the topic of lunatics

A few guys are trading off holding this banner in front of #hatwrksnashville in Nashville.

Yesterday, the store owner posted on Instagram about selling gold stars reminiscent of the Star of David, that say “unvaccinated.”

I spoke to a few Jewish people today who were furious. pic.twitter.com/RnRZo2aOFk

Authorities in Canada uncovered the remains of 215 children, some as young as 3 years old, at the site of a former residential school for indigenous students https://t.co/0iQYXrNTz0 pic.twitter.com/OefdQoufyn

Memorial Day Weekend was a wash out

It is a rainy Memorial Day weekend for many, as people look to get back to pre-pandemic life. @MeaganNBC is at Point Pleasant Beach, New Jersey, with more. #SundayTODAY pic.twitter.com/ehmjvLMYHJ

Covid Vaccines at the Shore

Beachgoers at three popular Jersey Shore spots will be able to get vaccinated against the COVID-19 virus over the Memorial Day weekend. https://t.co/uulRnFK1SJ

You can’t stop the tourists in Philadelphia

The weekend rain didn’t stop tourists from visiting Philadelphia monuments for Memorial Day. Some people say they’re excited to be traveling and enjoying the holiday weekend with family.​ https://t.co/PRVXNzfhBx

The Match is back

The Montreal Canadiens come back from being down 3-1 in the series to beat the Toronto Maple Leafs in Game 7! pic.twitter.com/r2nQAbDG6K

Another first-round exit for the Maple Leafs. 🤷‍♂️ pic.twitter.com/T9aXIICt78

Luke Aikins here casually breaking the world record by jumping from 7620 meters without a parachute.