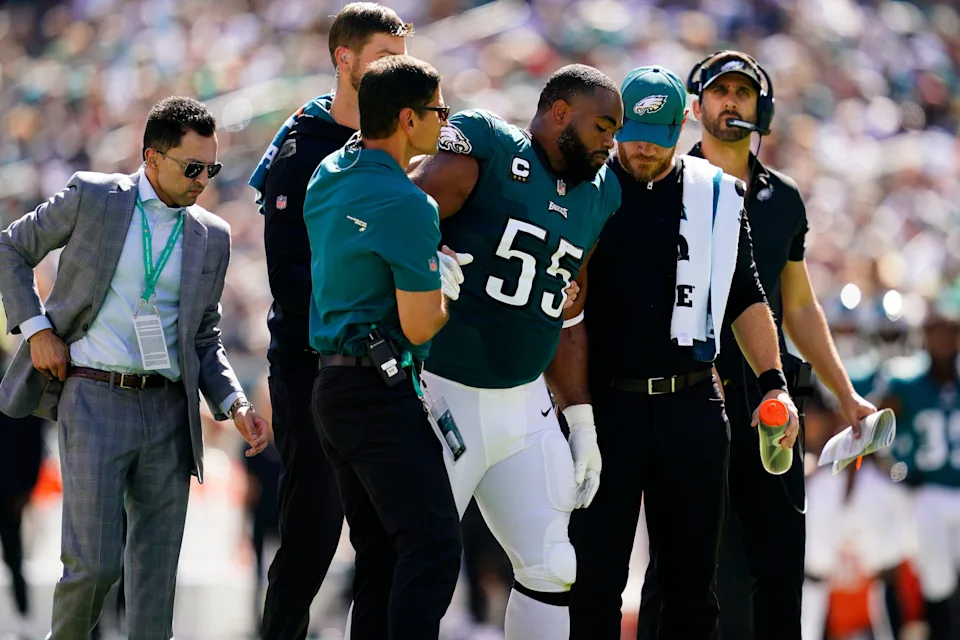 Injuries are part of the game in any sport, but losing two key players early in the regular season is always going to be tough to rebound from. The Philadelphia Eagles will need to find a way to rebound in a big way after suffering their first loss of the 2021 NFL season.

Veterans Brandon Graham and Brandon Brooks both left early in Sunday’s 17-11 loss to the San Francisco 49ers, not returning to action and forcing Nick Sirianni’s hand earlier than he would’ve wanted. Graham is reportedly linked with a serious Achilles injury, per NFL reporter Derrick Gunn, which would be a major loss on the defensive line for the team.

Graham already has the Eagles all-time record for the most appearances in team history at his position and being without his talents for the next 15 weeks will be tough for defensive coordinator Jonathan Gannon.

“I mean, it’s always tough and it was a pretty emotional moment for me to see BG limp off the field because I think me and BG – I know me and Brandon have played so much ball together and to see him walk off the field was pretty rough for me,” Eagles defensive tackle Fletcher Cox said postgame about Graham’s injury. “But we know Brandon, he’s in a good spot right now and we’ll talk once he figures out what’s going on. At the same time, we got his back and we’ll go from there and get ready for the next game.”

“Obviously with Brandon Graham, we’re fearful of what it might be,” Sirianni said postgame. “But we don’t know for sure yet, so I don’t want to say. But obviously we’re concerned. He’s such a good leader on this football team, so if we are without him, it will be a big blow. He’s a great football player and a great leader, obviously one of our captains, so we are fearful, but I don’t want to just say what it is yet because I don’t know for sure.”

Brooks also joined Graham on the sidelines during Sunday’s game, leaving with an apparent chest injury. He did not return to the game, which saw rookie offensive lineman Landon Dickerson step in and replace Brooks for the remainder of Sunday’s encounter.

The 32-year-old, 346 lb. guard has played in 63 regular-season games for the Eagles since arriving from the Houston Texans and brings a slew of veteran experience to the group, alongside Jason Kelce and Lane Johnson. Brooks’ absence  would force Dickerson into playing time much earlier than the University of Alabama product would’ve expected and could be another major loss for the team going forward.

“It definitely hurts,” Eagles quarterback Jalen Hurts said about Brooks. “It hurts me because those are OG guys who put a lot of time into this team. They have made a lot of plays and have done a lot of great things with this team. For them to go out tonight and for us to come up short, I feel bad and feel like I let them down.”

For now the Eagles players, coaches, and fans will hope for speedy recoveries for both veteran players, but know time moves on as the team now prepares for a Week 3 Monday Night Football trip to rivals Dallas.